Don't Miss
Home / instagram / Do you have a favorite…

Do you have a favorite…

Photo Caption: Do you have a favorite selection of your images you’ve taken? This is definitely in there with mine.. this and a few others.. #tbt #throwbackthursday
–
Repost @tracyleephotos
・・・
Back in April i had the pleasure of shooting with two of my very talented friends, @cecphotos & @stevenjmagner… one of the main reasons I like writing stories about my adventures is not only to share with you guys, but to help myself remember which I’m having a problem doing so many months later, lol. I think Chris was in town for the NAB convention, and we had dinner with @tenacityinpursuit… at some point I think Steven was jealous of us going out and shooting ? so he made the 4 hr drive out to vegas to join us for some adventures… I had never been here at night although I have explored many other parts in the same vicinity.. (please don’t ask the location, and please don’t name it; I appreciate you guys in advance… )
We hiked out to this spot after midnight on a night the very small moon wouldn’t ride until after the MW had set and played around shooting for a few hours. I ended up hiking out on my own because I had to be up but the guys wanted to stay for sunrise..
——
This was 12 images stacked in SLS for Noise Reduction I took exposed for the sky. The light pollution from Vegas was enough to light the foreground in spite of the lack of moonlight; that’s Vegas light on the bottom right. I’m sad that milky ways season is over but I am happy that I have countless photos left to share from the season because I took so many!
—-
ISO 6400
F2.8
15 seconds
@tokinausa 16-28mm @ 16
@slikusa 634-CF
@canonusa 6DMK1 —
#tracylee #tracyleephotos #slikusa #canonusa #tokinausa #canonbringit #teamcanon #mycanonstory #longexposure_shots #nightimages #nightshooterz #nightshooters #nightpics #milkywaygalaxy #astrophotography #astrophoto #astro_photography_ #longexposure #longexpohunter #nationalparkgeek#findyourpark #yourshotphotographer #naturephotography #adventurephotography #landscapephotography  #allaboutadventures 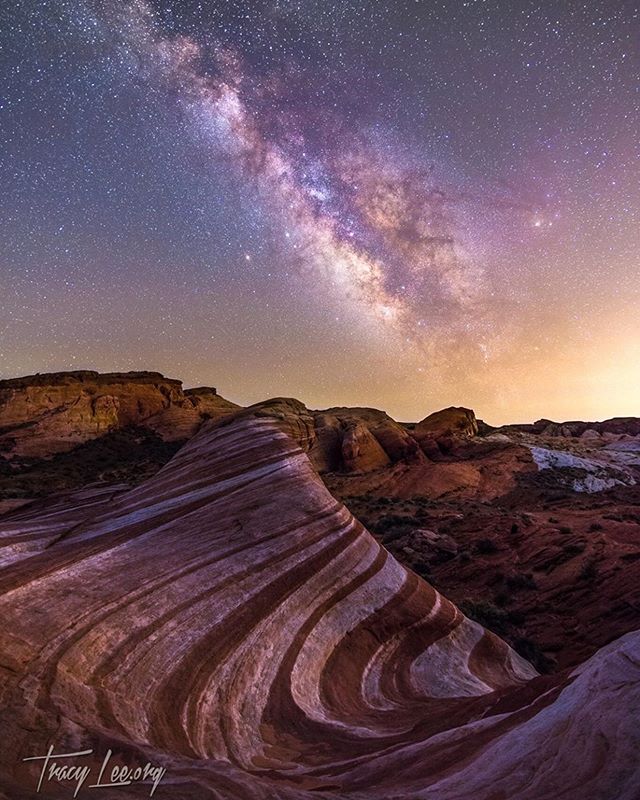