Don't Miss
Home / instagram / There’s not a time I…

There’s not a time I…

Photo Caption: There’s not a time I can think of lately that I don’t have 2 set ups when I go to shoot astro. One, I set and leave for timelapse or star trails or both.. The other is the one I try all different kinds of shots and compositions with. Sometimes I set the timelapse camera with no true plan for it other than a back up, in case I don’t get anything worthwhile on the “planned shot”.. This I think turned out to be one of those situations as my planned image is proving to be more trouble than it’s worth.. —
This was about the only time of year that the Milky Way moves far enough west to get in a Horseshoe Bend composition and still have the GC above the horizon. I’m thinking you still will have a chance later on this month, albeit a very short one…
—
The clouds got us, we knew they probably would as we were watching a flash flood earlier this same day near Buckskin Gulch. One of the best lessons I think I have learned is to timelapse in a cloudy situation. It has saved my trip a bunch of times at this point. —
I set this tripod a little right of center at Horseshoe Bend and left it the entire time we were there.. This was the night that there were hundreds of people out there but most left as soon as the sun went down. We had a few hours to ourselves although I kept tripping out at flashlights I saw that would walk halfway down the trail, turn around and go back. We figured out later that they were astro photographers.. There were a bunch of them out there yet we were canyonside completely by ourselves. Weird! I figure they all must be new at it; we saw at least 8 groups of people up top.
—
This is 420 images taken that night. Oddly enough, sometime in the middle of the timelapse (not at the beginning!) the foreground actually lightened up. I grabbed 10 of these images and put them in Starry Landscape Stacker and was able to pull more out of that foreground without too much noise for this timelapse.
_______
ISO 3200
F2.8
20 seconds
420 Images
10 stacked for NR in the Foreground in SLS
Processed in LR & PS
_______ 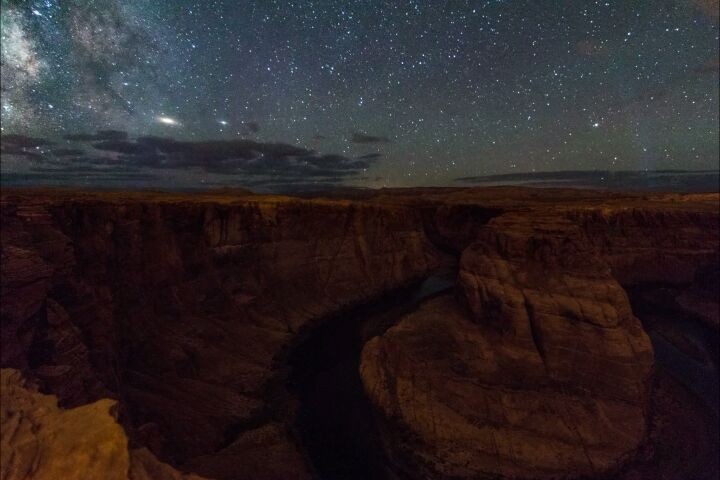