So i’m definitely editing out…

Photo Caption: So i’m definitely editing out of order, as the inspiration hits me.. This lovely image came out of absolute chaos and probably shouldn’t even exist, if you want to know the truth.

It was day 5 of my Milky Way journey in California. I had spent days 3-5 with Daniel Britton​ Kayla Rain​ and Dan’s daughter, Rory doing what we love to; adventure and chase the Milky Way. Death Valley was close to 115 degrees when we got to sea level and we continued up to Dante’s View to see the sunset; it was a cool 78 degrees up there.
The plan was to head to Zabriskie point at 830 and shoot the milky way a couple hours and then head back to Vegas. We got to a VERY windy parking lot but still grabbed all our gear and trekked it the short way up to the point. By this time we realized how really bad the wind was with it whipping my hair in my eyes.
I really wanted to shoot so I still set up gear in the hopes that I could weigh down my tripod against the gale force winds. Dan and I sat side by side as blue hour dwindled and then moon was setting, and we each got in a few shots; both holding our tripods tightly to the ground as if our lives depended on it. Kayla searched for cell service to check the weather to see if the wind was going to die down any time soon.. It wasn’t so we finally called it a night. In NO WAY did I ever think that I possibly got any images in focus or usable, but I actually did!

This image is a composite of two, one for pretty much the entire image, and one for the moon that I shot as a higher aperture to get a moon star.. I really lucked out in getting a shooting star, thank you Perseids and Aquarids! 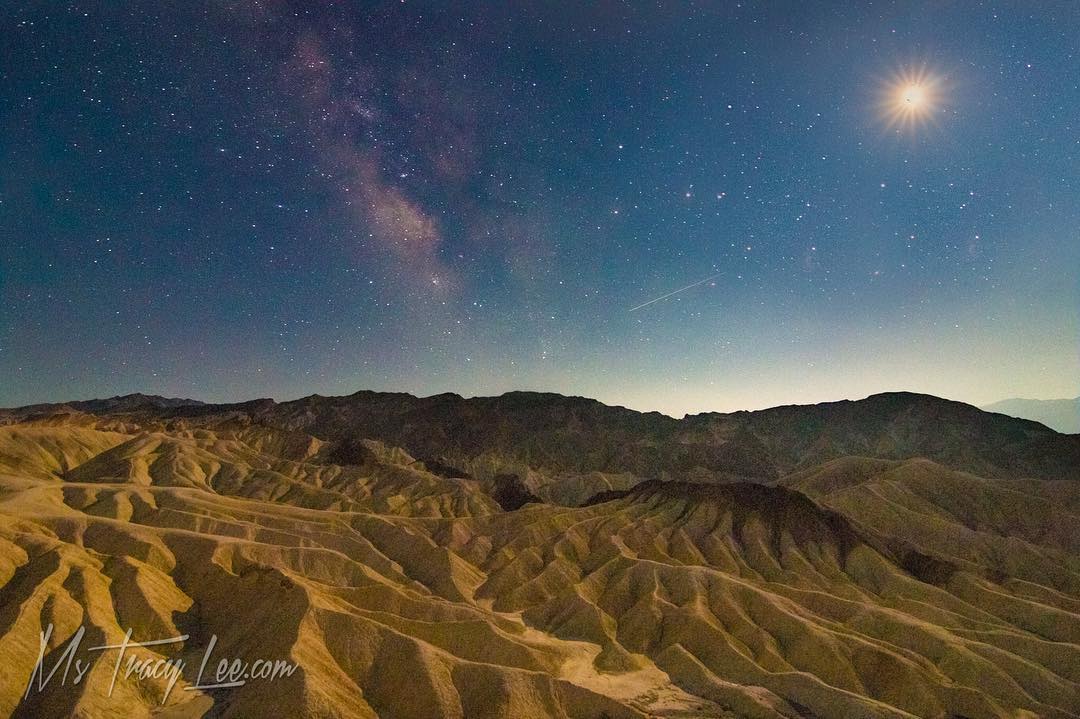