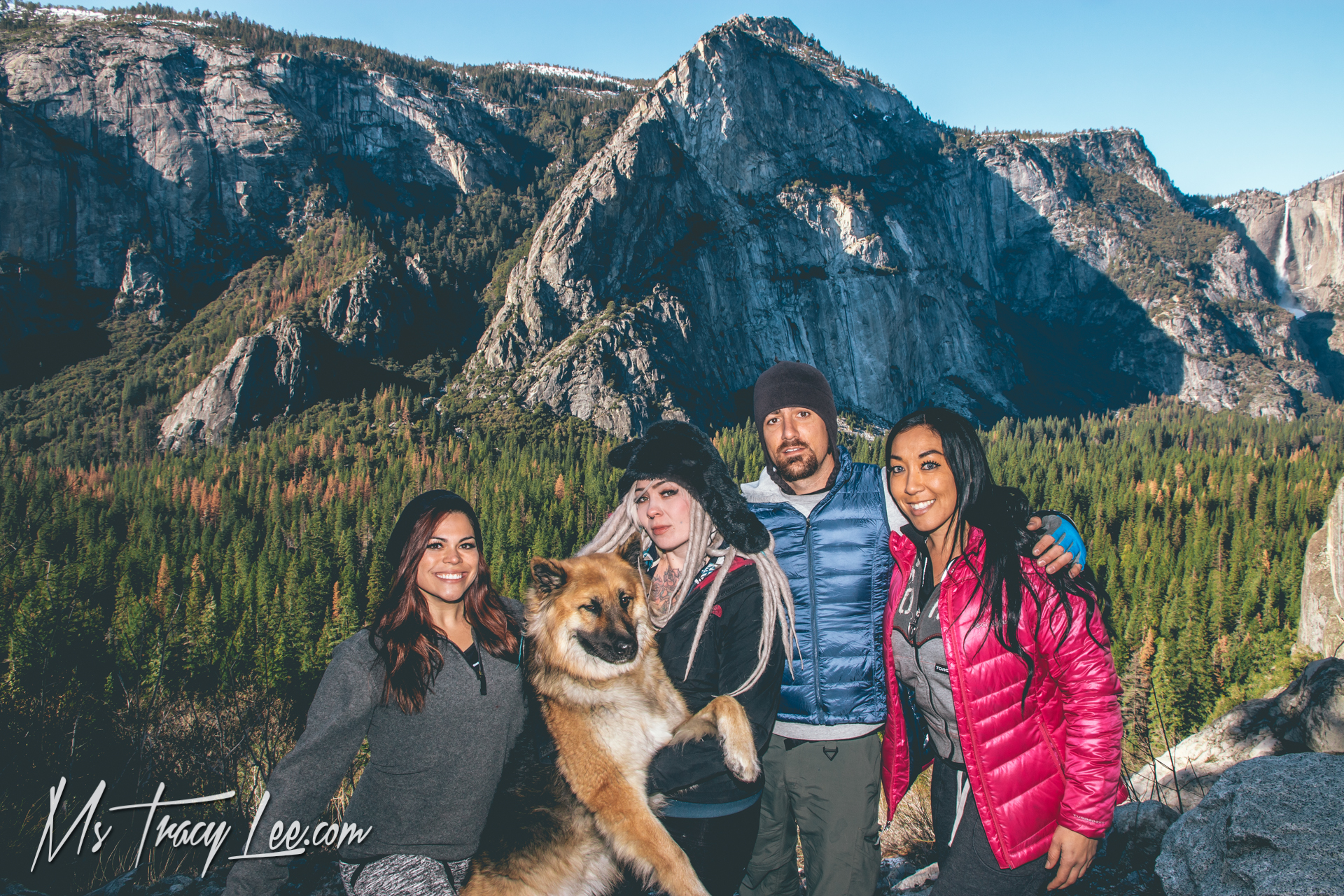 Pictures of the yearly Firefall phenomenon caught my eye a week ago and I posted a photo of it to Facebook… A day or so later, my friend, Sarah said to me, “let’s go to Yosemite!” It didn’t take long for me to calculate that if I was going to see it, this was the year to do it with El Nino helping to make conditions absolutely perfect for it.

NOTE: This Photo is by Vijay Sridhar Photography. Click to see his story about the falls.

See, Firefall only happens if certain key things are in place. First, it has to be end of February. This is the time of year that the sun is perfectly lined up to shine on Horsetail falls at the correct angle. Second, there has to be a Horsetail Falls. Horsetail Falls is a product of snow melt and run off so although the sun position is right twice a year, there are only falls one time a year because there has to be snow. This also means that it has to warm up enough in end of February for the snow to melt. Third, the sky has to be clear; clouds in between the sun and the falls keeps the special event from happening by diffusing the light too much. Fourth, you have to be at an angle to the falls; too straight on and it looks bright orange overall but doesn’t look like fire.

We checked the weather, Sarah checked her work schedule and I did a ton of research on Firefall.. I found a blog by Aaron Meyers Photography with a lot of great information and discovered that according to him, peak of the fall would be on Monday and we were planning on going on Sunday… Sunday, the day that THOUSANDS of photographers would be in the park attempting to get the same shot we were. So we planned to leave late Saturday night so we could attempt to arrive in plenty of time to get parking as well as a good place to shoot from.

We got on the road at 3am Sunday morning; our girl, Jes driving and our boy Marcus along for the journey with Sarah and I.. And of course Sarah’s baby, Meeko was with us. Won’t bore you with the details of a 7 hr drive but we got to Fresno after 9 am and made a stop for some supplies for the day. We made it to Yosemite National Park to try and find parking by about 1130 am. 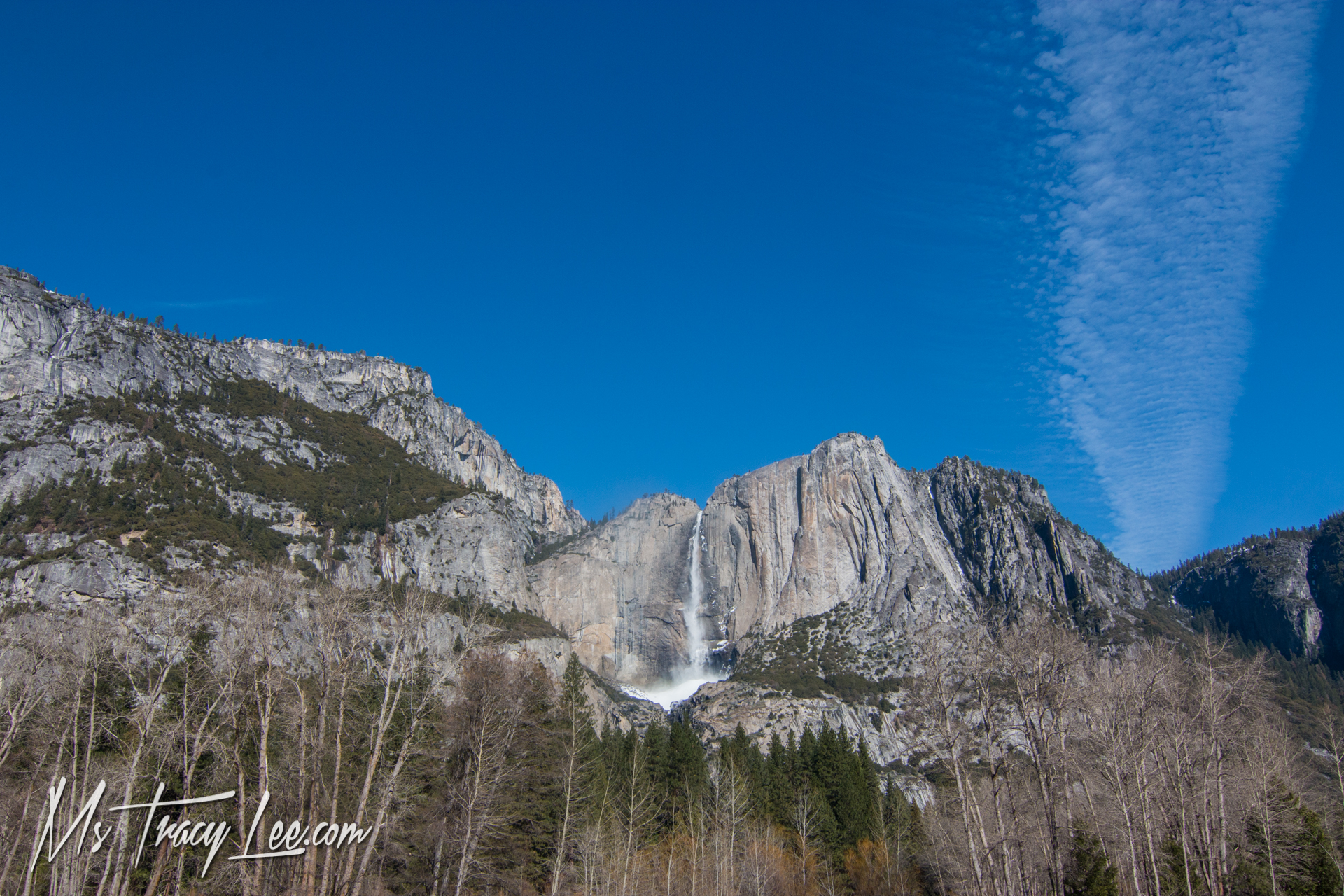 The park had closed off one lane of the loop in anticipation of the amount of photographers going to be there trying to park on a sunday. We took one lap through the loop to formulate our game plan as far as parking and where we were planning on shooting from too. The sight of Lower Yosemite Falls stopped us in our tracks and in spite of a sense of urgency over parking, we stopped to grab some photos in front of the iconic falls.

After completing the loop, we pulled around, began again and parked at the end of the line of cars in the left lane. We hoofed it over to where we spotted some photographers along the river to check out their angle on the falls, and then went back to the car to pack up our gear and then hike the opposite direction. Our goal was to hike up above the tree line and shoot across to Horsetail Falls. 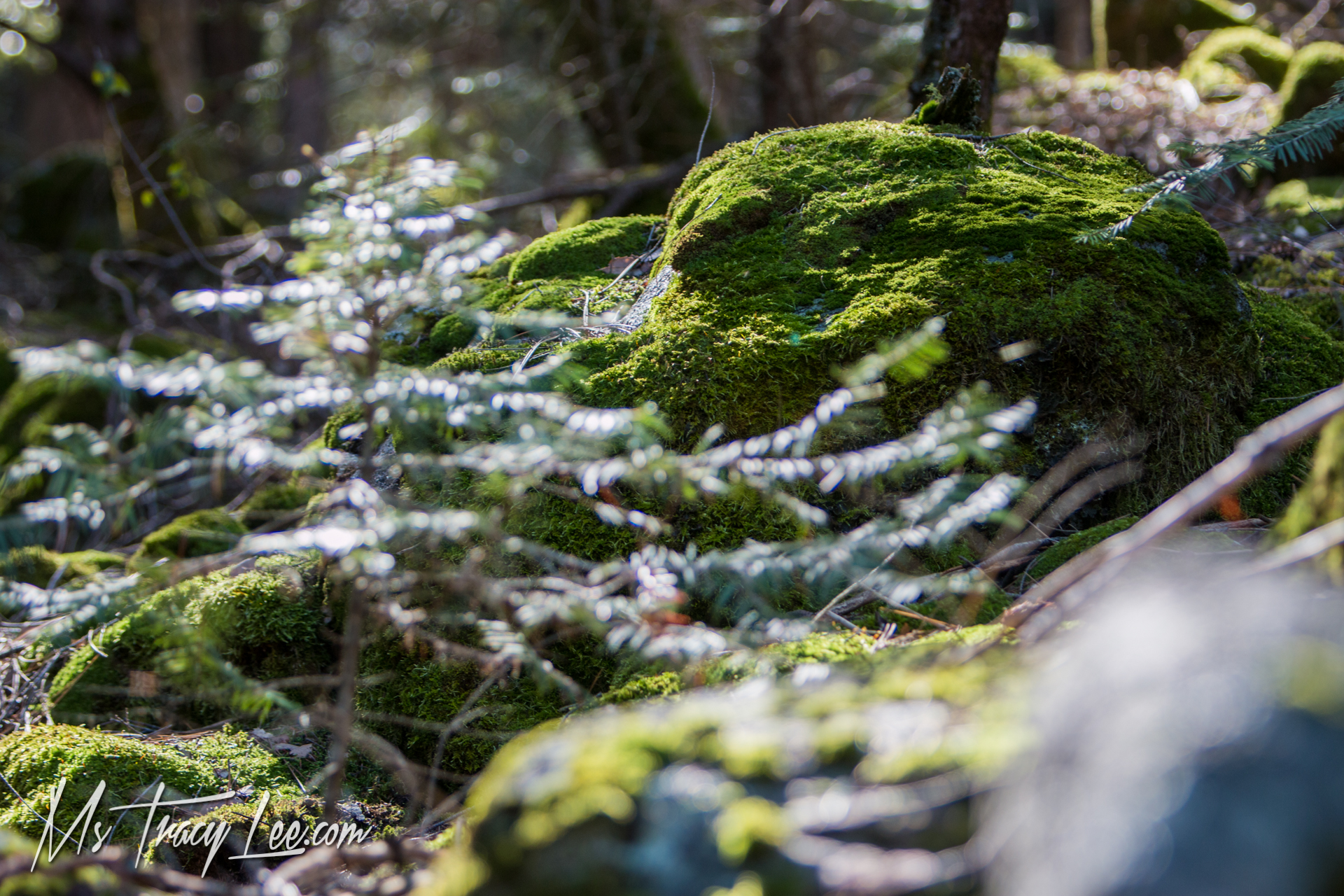 We cut off through the trees and split up a bit. I had my camera with my 70-200 in hand with a backpack on my back full of food, camera gear, tripod, and a campstove. We anticipated cold times waiting till sunset so figured warm food and drink was a necessity. The rocks we were climbing up towards the cliffs on the south side of the valley were covered in moss and many of them weren’t very stationary due to years of leaves and pine needles being a part of the “ground”. I slipped and fell and rather than let my camera sustain any damage, I caught myself with my other hand and then was overbalanced by my pack. I slammed my leg into the rock pretty hard and fell forward on my face. It hurt but I dusted myself off and kept going. After about 45 minutes, it was Sarah & Jes who discovered the perfect spot for us; Marcus and I had headed up towards a sunny clearing we saw, but it had brought us too straight on to Horsetail Falls. We also had an excellent view of Yosemite Falls. We angled across the forest to where Sarah, Jes and Meeko were waiting at. 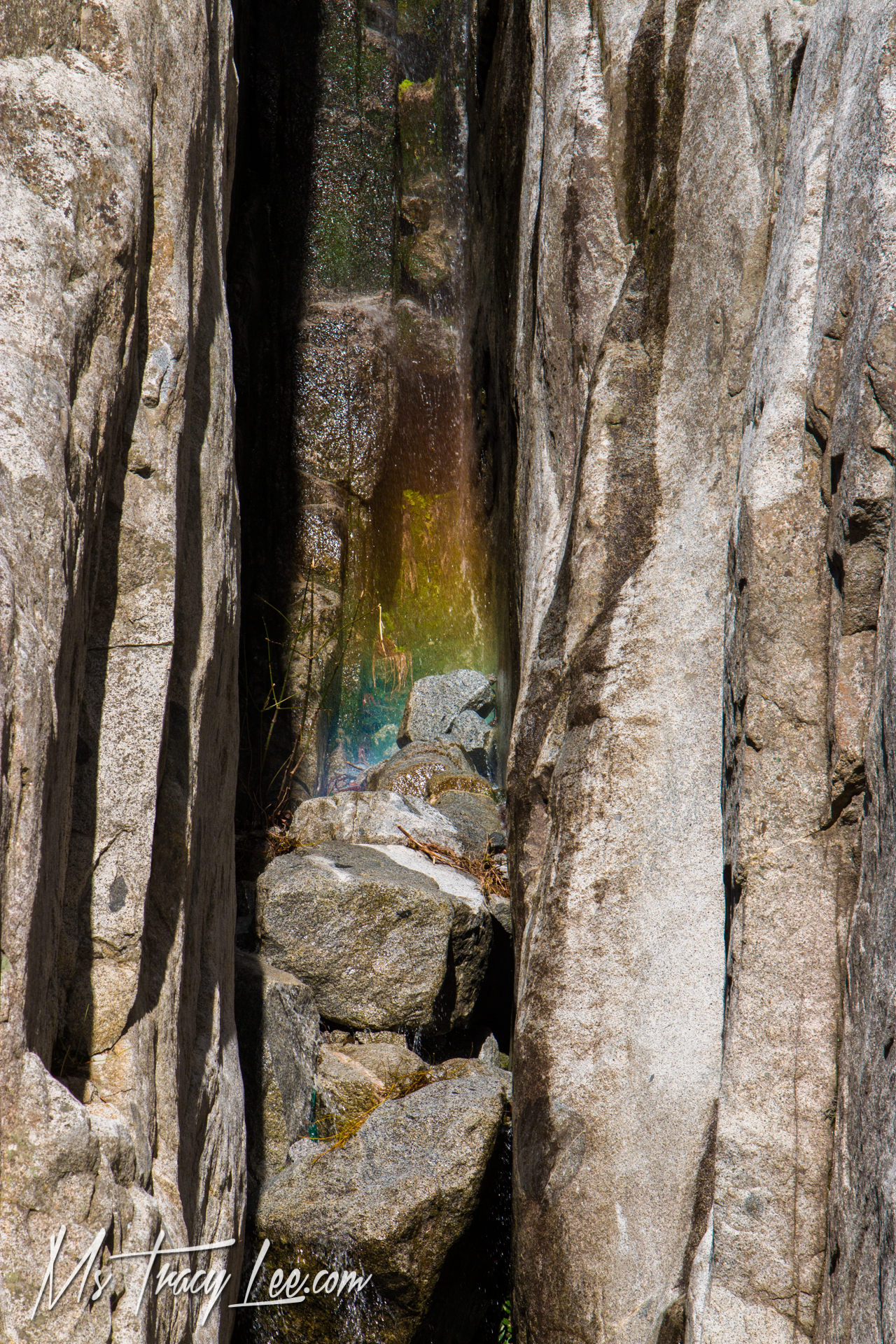 They excitedly led us to the “perfect spot” they had found, and perfect it was! It had an angle on Horsetail Falls, a large clear area with no trees in the middle of it, and it’s very own waterfall/grotto cascading off the cliffs behind us. This is where we set up camp for the next 4 hours to wait. Oh and did I mention we had cell service available to us up there? Yup, I spent a bunch of time in between shooting photos and exploring, getting on my phone and broadcasting on Periscope, FB Live, and Blab.. We made cup o noodles sometime through the day, Sarah and Marcus hung hammocks in nearby trees, and we took a ton of photos. We even drank from the waterfall. A rainbow appeared between the rocks above Sarah and Jes’s heads where a second waterfall was next to the first. It was a blissful afternoon. 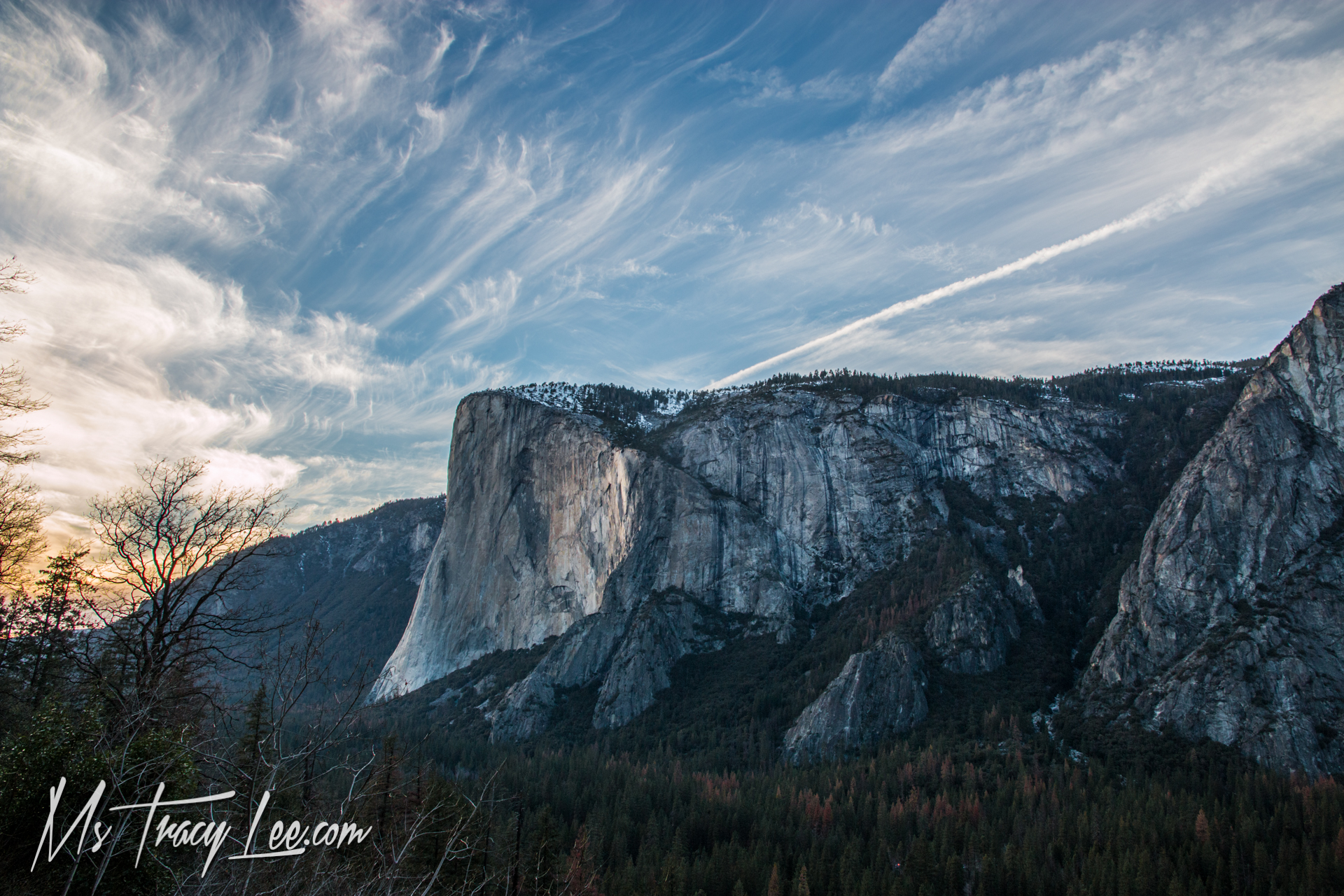 I started to get concerned a the day waned; although skies had been clear they were now beginning to show signs of clouds rolling in. With a sinking feeling around 5:15 pm, I was pretty sure our efforts to see the Firefall were going to prove unsuccessful. I was live broadcasting on FB at the time when the falls started to turn orange, I shot a couple photos but they never completely turned “on fire”. We were disappointed, but our beautiful view and waterfall we had to ourselves all day definitely softened the blow. Little did we know we were going to have another thing happen to make the trip feel worthwhile. 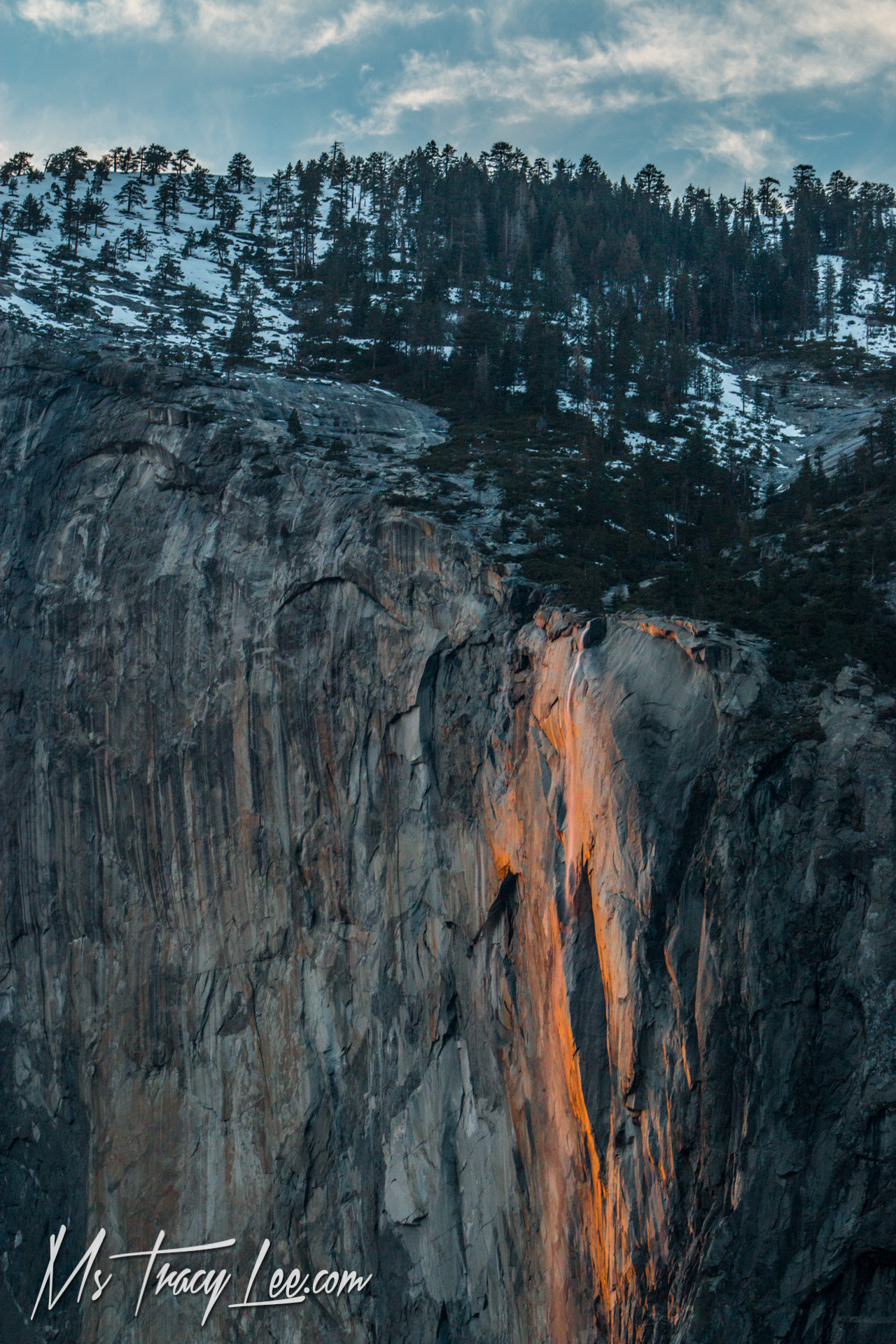 We had already packed all our gear in anticipation of how quickly it would get dark and our journey back down the hill. None of us had brought headlamps so luckily Sarah had found a pack of them at Walmart and purchased that morning. We navigated down through the trees and slippery rocks as the light of day was swiftly disappearing. We headed due north to the road instead of trying to follow our previous footsteps. It didn’t take long for us to get down but the ground was extremely treacherous; I was very thankful that Sarah had found the lights instead of us having to rely on our cellphones.

We got to the car, changed and packed all our gear. We joined the long line of cars headed around the loop and then out of the park. As we crossed over to get to Northside drive from Southside Drive, we spotted a gaggle of photographers gathered on the bridge. Our heads all turned to try and take in what they were shooting; we started yelling and screaming in excitement to Jes, “Pull over!” The near full moon was about to rise up from behind Half Dome, the most iconic of peaks in the park and there was an intense halo of light surrounding it. 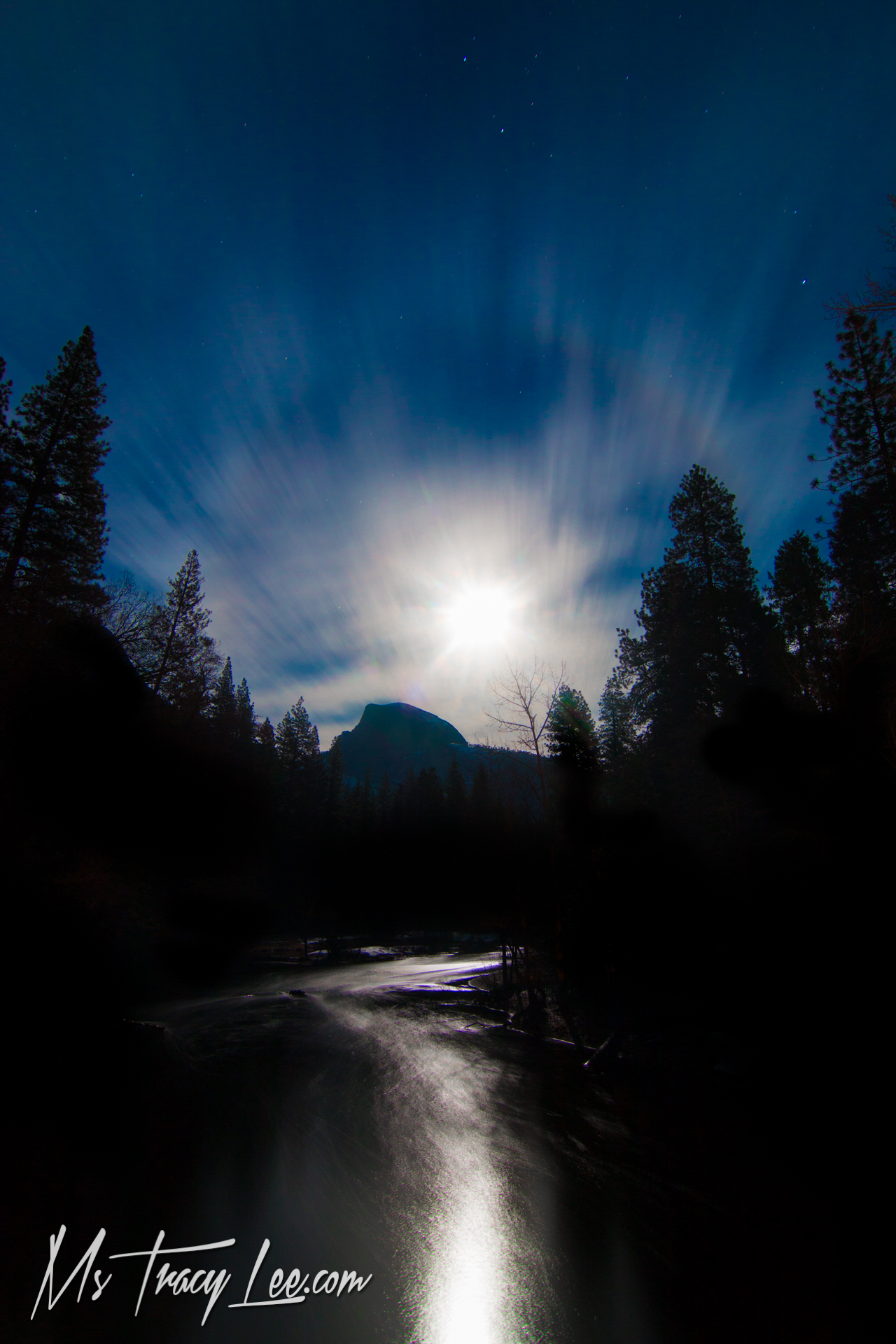 I was able to get back to the bridge and set up but not in time for the moon to still be hidden behind the peak. I played with my settings, shot different compositions but it wasn’t until I crossed the road to the east side of the bridge did I get this shot. I had never realized that moon halos were actually rainbows until now doing research after seeing this photo I took; learned something new today! Sarah had already taken her photos and moved over to shoot Yosemite Falls in the moonlight which I eventually joined her for that as well. 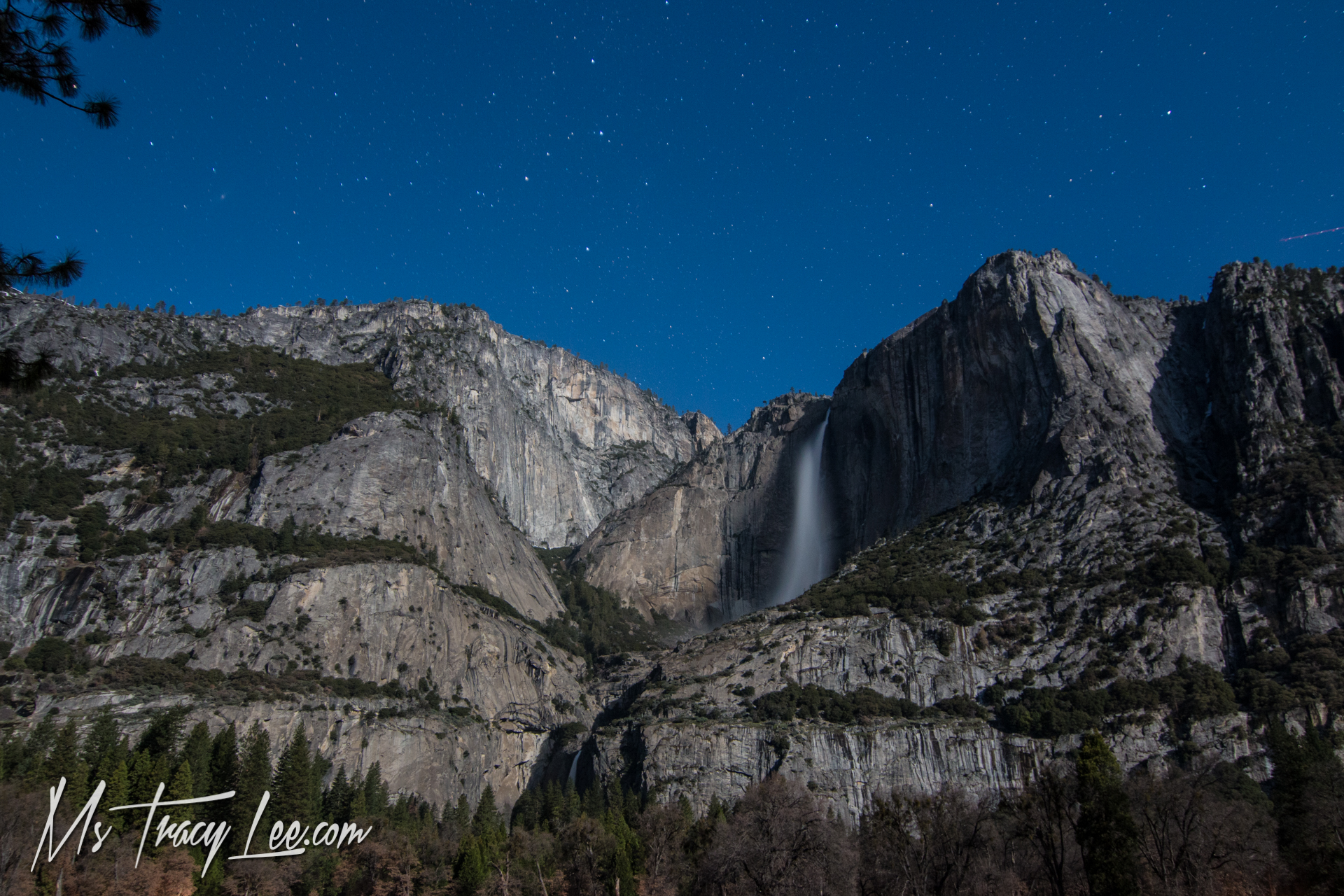 Freezing cold, we piled back in the car and started the long journey home. I managed to get car sick on the crazy windy road from Yosemite back to Fresno.. We stopped for a bit for dinner at BJ’s in Fresno before making the final 6 hour drive back to Vegas. I really can’t wait to try again to see Firefall in the future and am even contemplating trying again this week. Thank you to Jesenia, Sarah, Marcus and Meeko for an absolutely beautiful day I will never forget!

Oh and, I have to be honest, the entire journey door to door was 26 hours so I lied in the title.. Deal with it! 😉