Spooky Gulch and Peekaboo Canyon and the adventures of Meeko 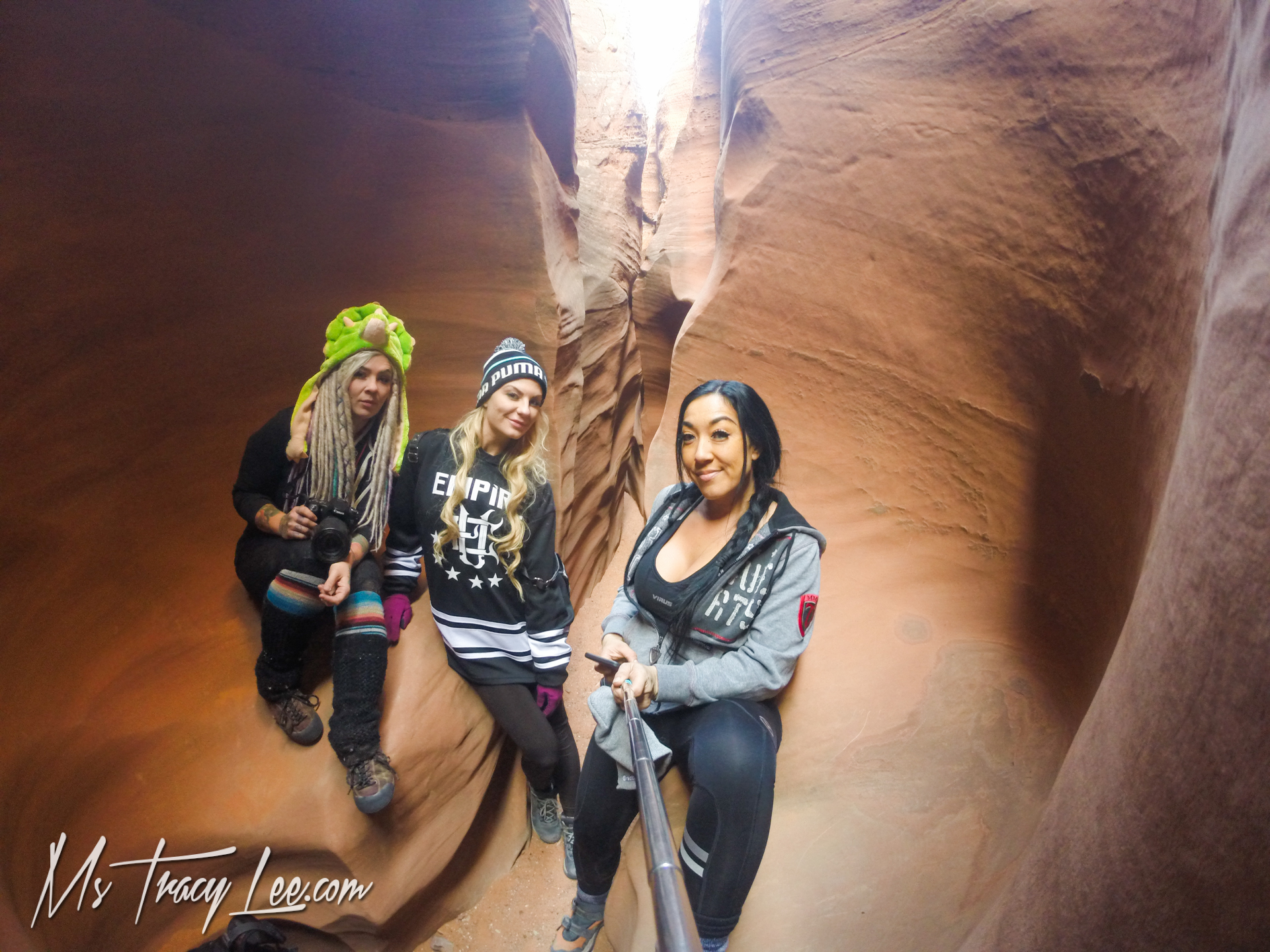 Spooky Gulch and Peekaboo Canyon and the Adventures of Meeko, the Husky/German Shepard mix!

I’m going to preface this blog by giving the disclaimer in advance.. Many of the photos on this passage are totally out of order; I was juggling 2 cell phones, my canon, and a go pro this day. Also, some of them were not taken by myself; both Sarah and Alex took photos of me on this trip. But, I digress.. 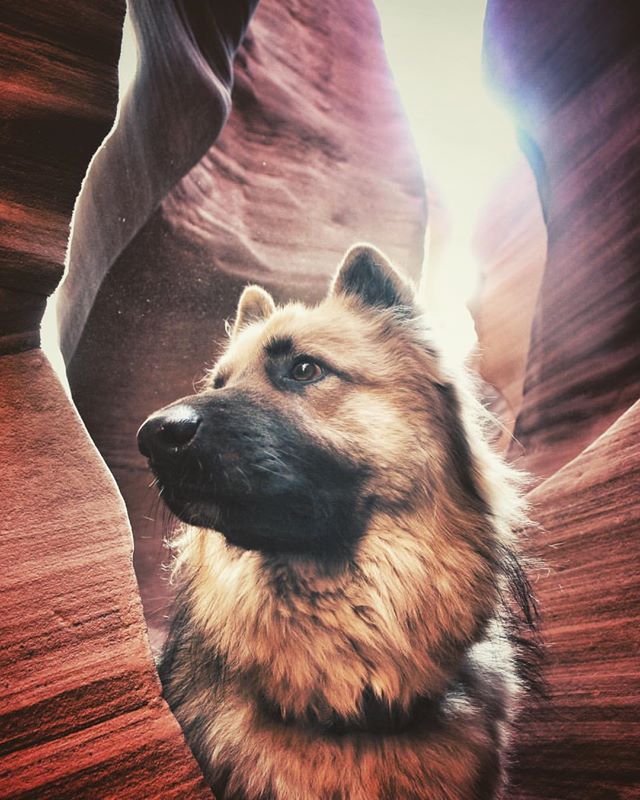 Meeko… I would say that he is definitely the leading character of this story although the adventure began with Alex. She’s a beautiful friend of mine who had been wanting to join me on one of my journeys for quite some time. Between dancing in the show, Sexxy, to being the mood director at Light Nightclub, her time to do this was very limited. Planning something I had never done before was a must, and it needed to be non technical so Alex didn’t have to go out and get new gear. Along the way, my gorgeous, dreaded friend, Sarah heard that we were taking this trip last Sunday and immediately signed on. When she heard we had room for one more, she signed Meeko on as well. 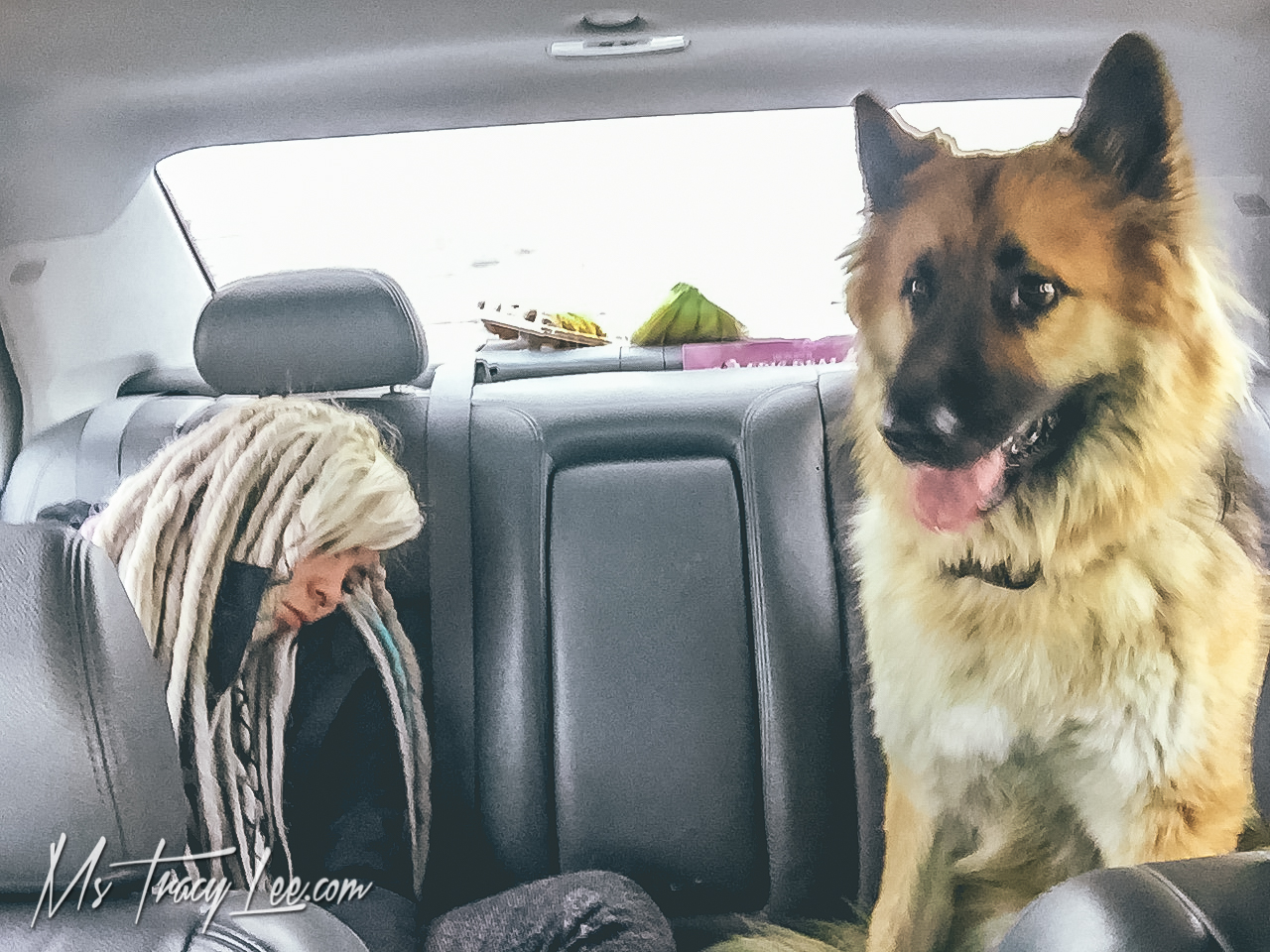 I started thinking of nontechnical hikes I had yet to do in the Utah vicinity. Spooky and Peekaboo popped in my head and the wheels started turning. I had three questions for Alex; Could she sleep in the car while I drove, what time was she off work, and was she claustrophobic. Yes, 2am, and No were her answers so I started making plans. We picked her up at Mandalay at 230am Sunday morning, made a stop for some food at the grocery store and were off. Sarah had also only gotten off work a few hours prior so I was soon the only one awake on the 5 hour drive to Escalante. Oh, and Meeko. He was wide awake keeping me company the whole way. 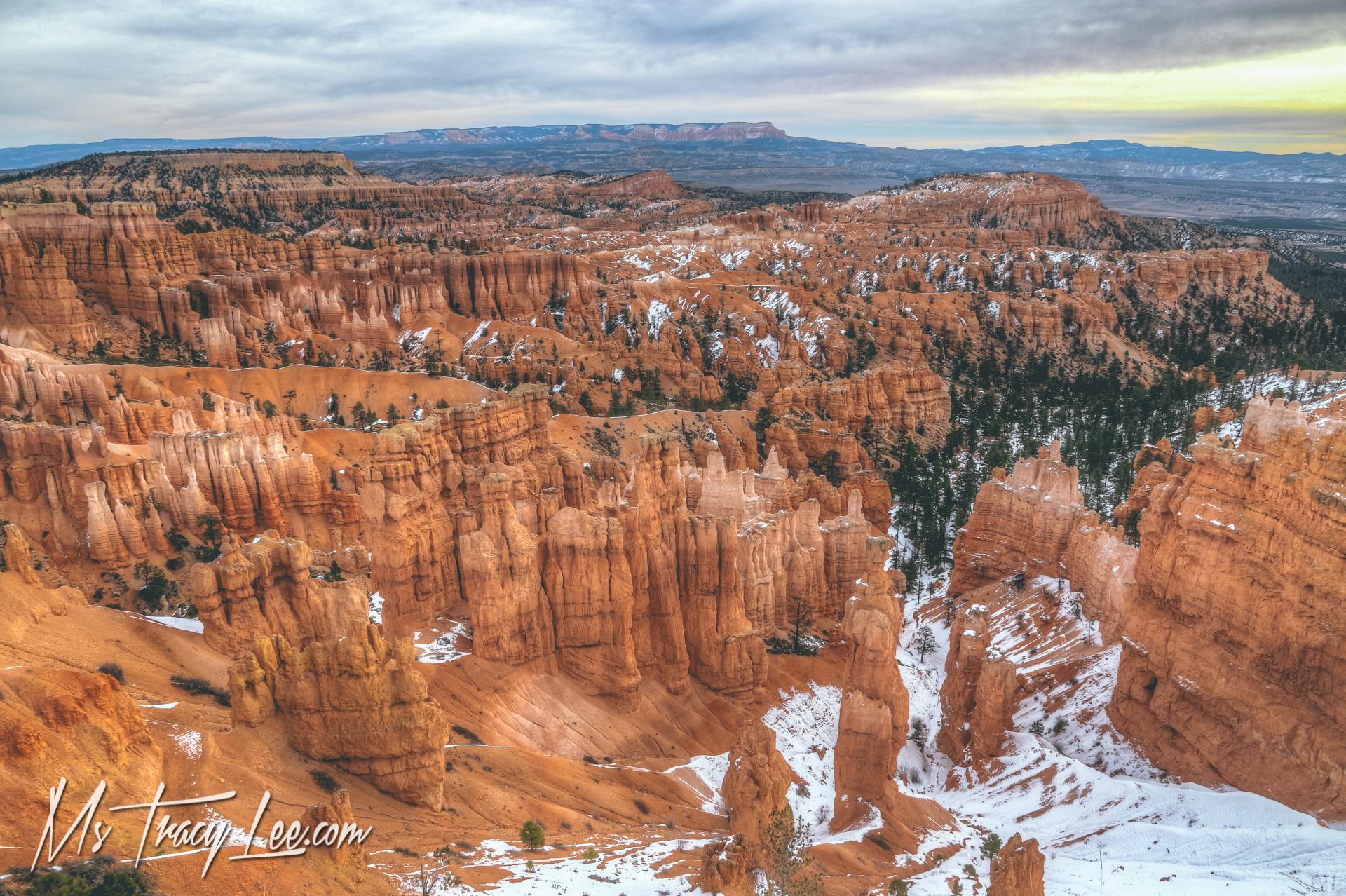 We made a stop in Bryce Canyon. If you’re into adventuring at all, buying the National Park Season Pass for $80 is one of the best purchases you can make all year. Living in Vegas especially (Bryce, Zion, Red Rock, Lake Mead). You go to 3 parks in a year, and it’s paid for itself; having that pass makes it easy to make quick detours into the National Parks. Alex had never been to Bryce, and although I have been many times, I had never seen it in the snow. As you can see, it was worth the side trip. 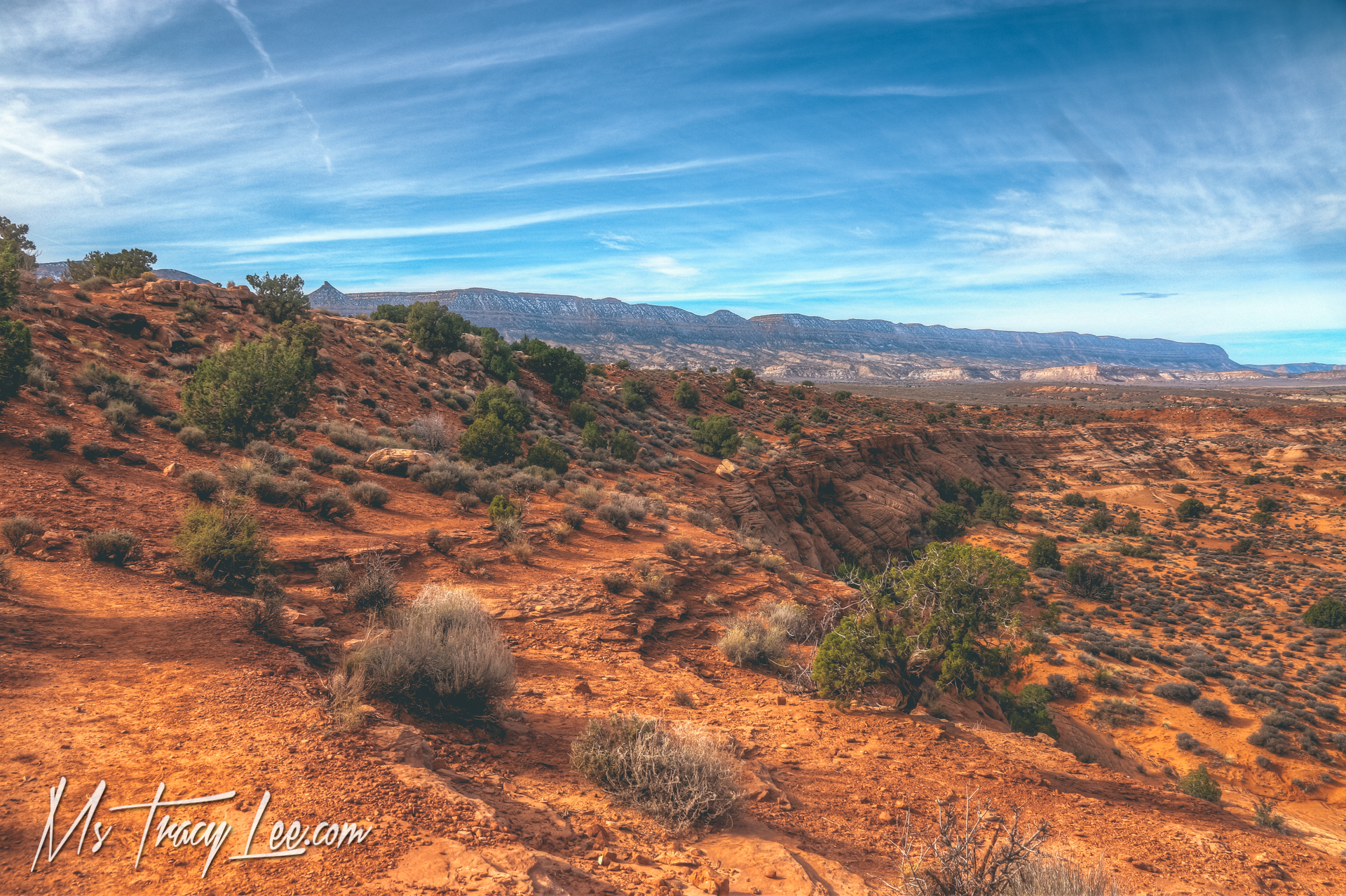 Escalante is a treasure trove of cool hikes, canyons and camping areas that I have barely even begun to scratch the surface exploring.. All you do is head down Hole in the Rock Road and along it’s 58 miles, there are countless places to explore; some that are technical and need ropes and equipment, but plenty non-technical as well. It was my first time heading to Peekaboo and Spooky because claustrophobia of friends had held me back from going in the past. 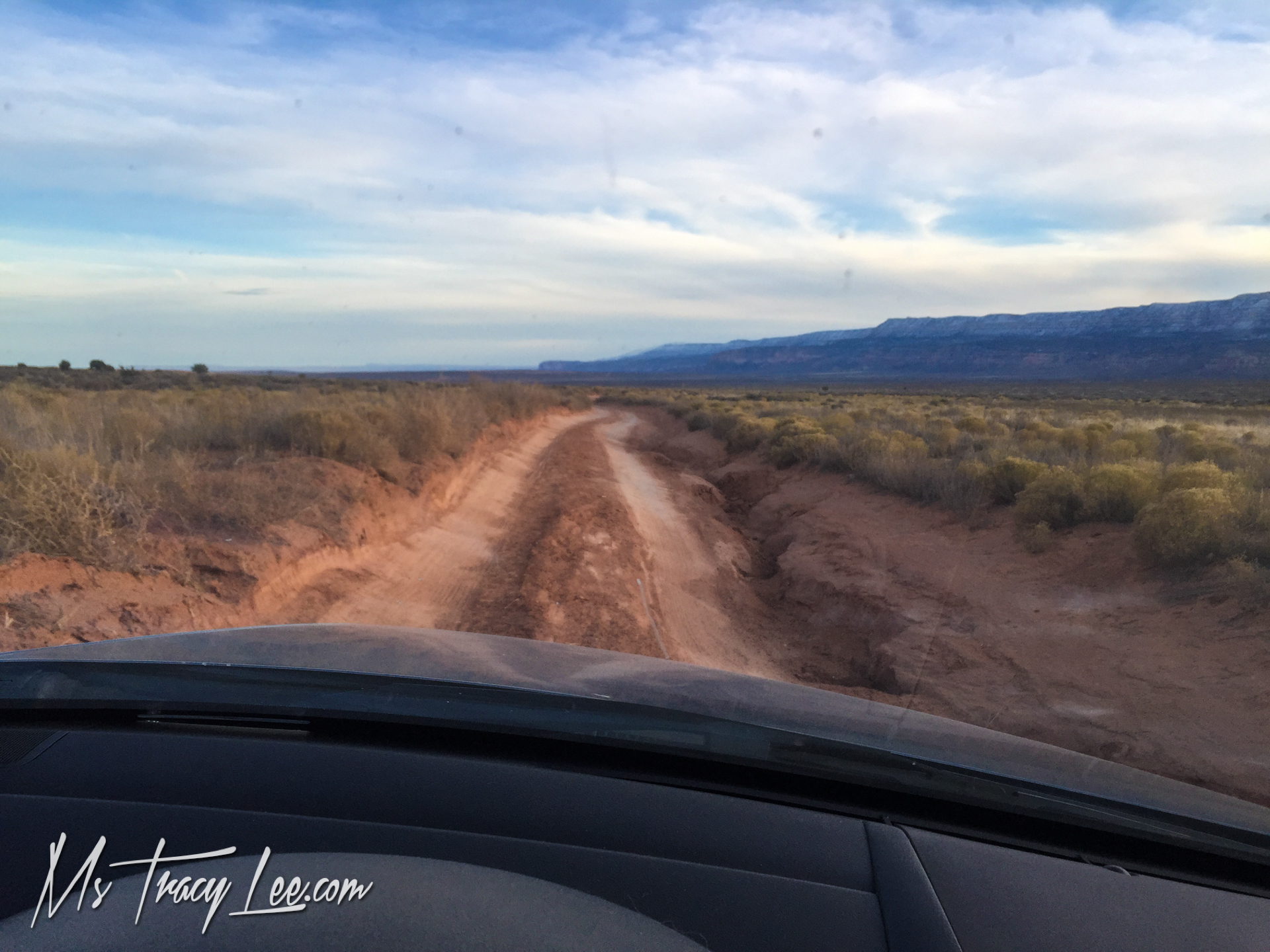 The directions I looked up on the internet had me traveling 26.1 miles down a well graded, BLM dirt road. I was able to travel about 40-50mph along it in my trusty Honda Accord. At the exact distance of 26.1 miles, we came across the road to the left labeled “Dry Fork Coyote Gulch” and took a left. The road wasn’t in the same condition as the main road but I took my Honda 4×4 down it’s questionable path about 1.5 miles. We made it safely to the parking area but because of it’s challenging aspects, made the decision to be back in plenty of time to have daylight for the exit out. 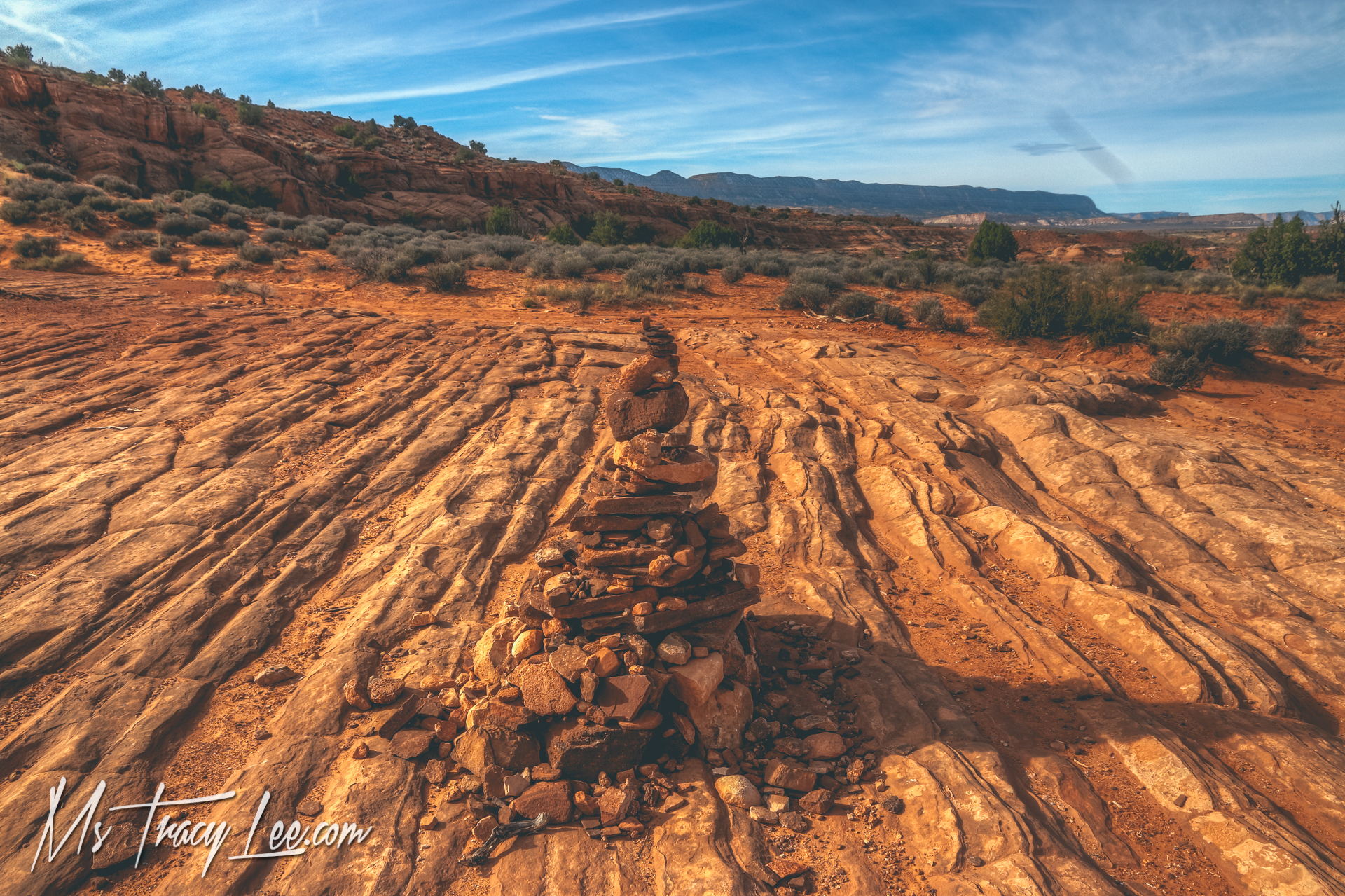 We signed the register and followed the well worn trail next to it. It wasn’t long before the trail disappeared and we were hiking across slickrock. Fortunately, there was no doubt in our heads which was to continue as some of the largest cairns we had ever seen were marking the way. We passed a couple of dryfalls and then down alongside a sheer rockface. It wasn’t a very long distance to reach the start of the slots; it was no more than a mile and once we reached the wash, Peekaboo was straight ahead to the right. In doing more research after the fact, I am learning that we missed an entire slot called Dry Fork Slot off to the left. We saw that there was a slot over there, but thought we had read it was tiny and not very good so we didn’t bother. Looks like we’ll save it for next time. 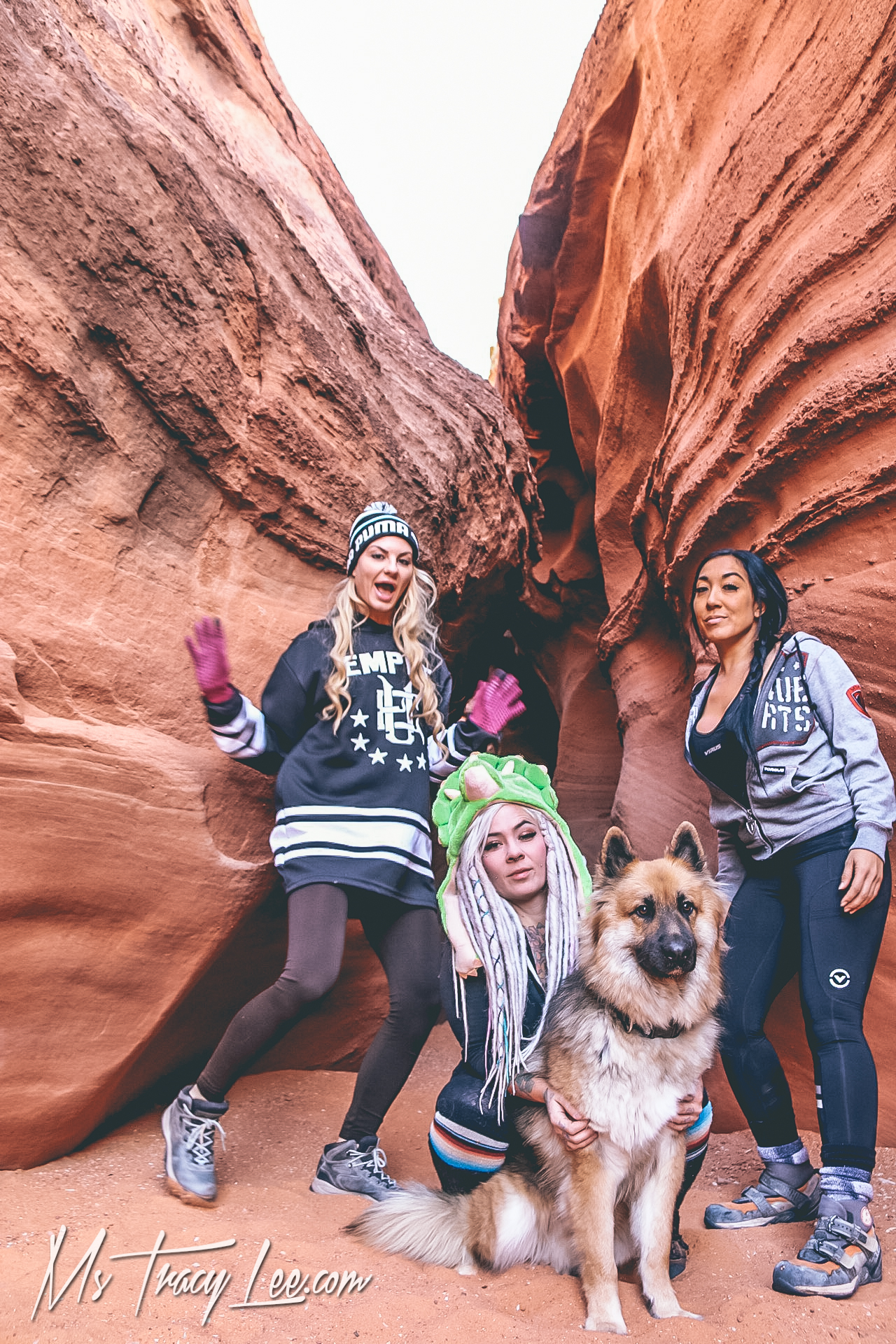 All the websites I had read suggested to bypass Peekaboo, and continue on to Spooky. We decided to add Brimstone Gulch to the mix too, which was past Spooky. The three canyons were all on the Northside of the wash, seemingly side by side, but there was a little confusion though and somehow we ended up in Spooky first. We weren’t alone; a couple came into the slot after us and we felt obligated to rush through instead of savoring the time, and taking photos. When it was wide enough to (which actually was a difficult thing to do) we let them pass. They got to what they thought was the end, and didn’t climb out of the canyon; instead they turned around and headed out the way we came and we did the same. This particular canyon is not for ANYONE who can’t handle tight spaces or is claustrophobic; you have to inch sideways through certain areas and carry your backpack in your hand. That being said, it’s texture and the caress of it’s tight walls are forever etched in my mind; calling for me to come back again soon. As we exited it’s beauty, we realized we still had to continue on east through the wash to get to Brimstone Gulch. 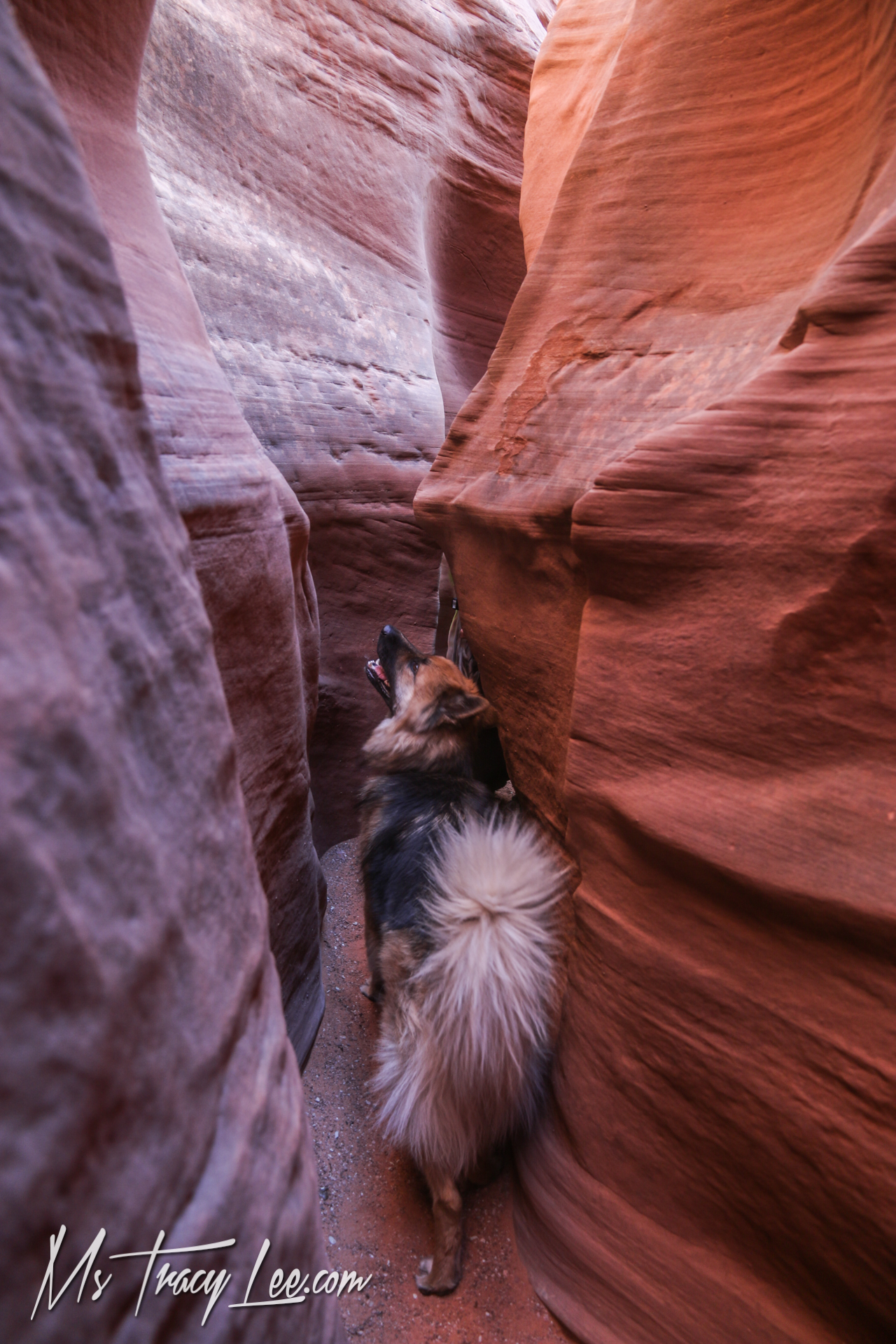 Now Meeko was LOVING all of this. He was bounding around, racing ahead through the narrow slot, and then coming back with a look on his face as if to say, “Well, are you coming?” The day was comfortable although the temperature in the slot was much cooler so we continually found ourselves dressing and undressing. Poor Meeko has all this fur and his only choice to cool off was to roll around in the cold sand. As we made our way through the sandy wash, he would run off ahead and then come running back, and then off ahead again all the while his tongue hanging from the side of his mouth. 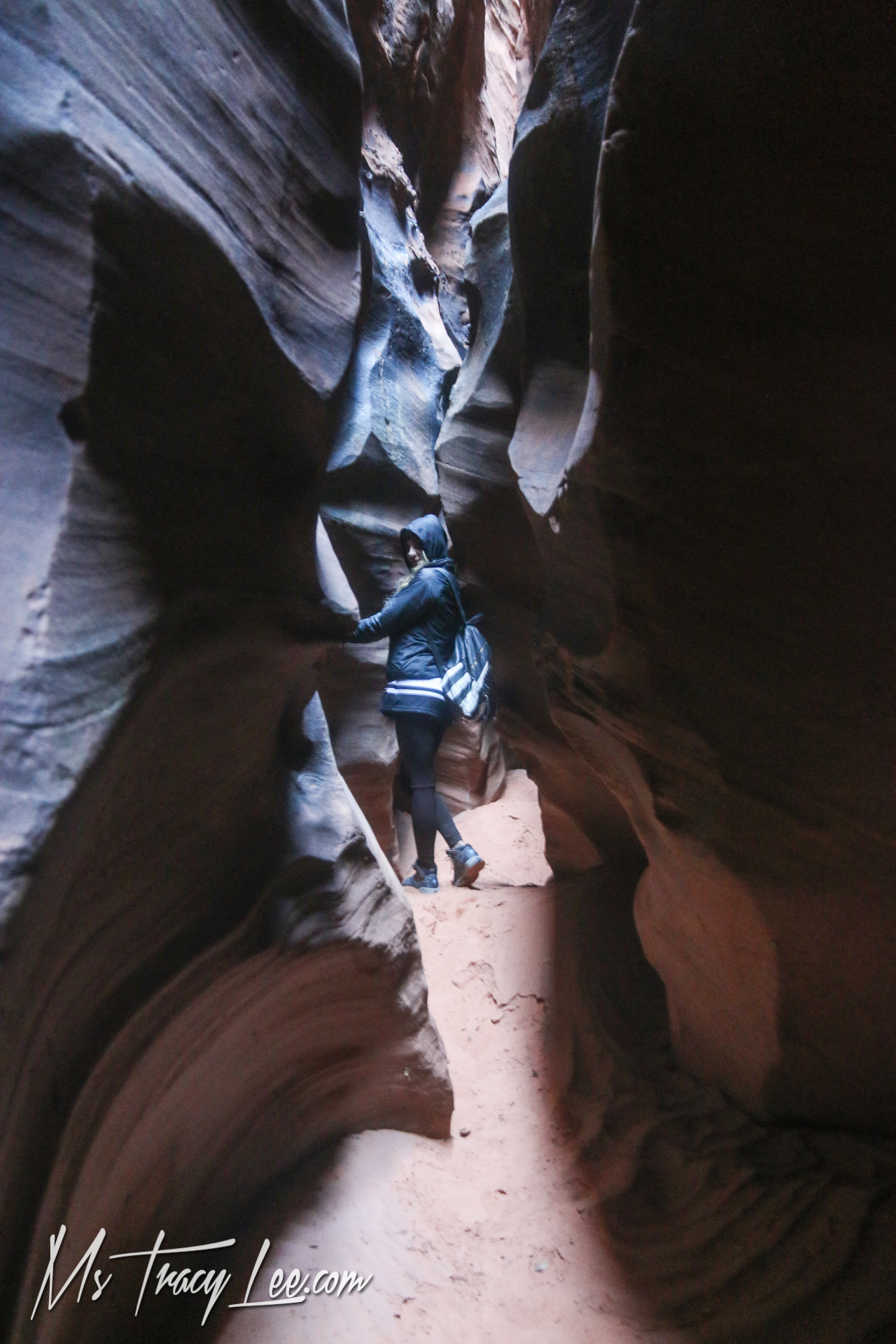 Brimstone Gulch took about 45 minutes to get to from the mouth of Spooky Gulch. Everything I’m reading says it was under a mile but I can tell you, it seemed much farther. It was through a set of narrows and across a ton of sand so it was definitely slow going. We had been warned there might be pools to wade through but fortunately for us that day in early December, it was completely dry. The dark walls rose high above our heads as we entered into the sinewy vein of Brimstone Gulch. This canyon looked completely different than the other two; we walked a narrow sand walkway that dropped off on each side to where it met the walls. This is where the pools of water gather after a rain. It took no more than 15 minutes to explore to where we turned back, as the canyon had gotten extremely narrow at this point. I’m assuming this was where the hiker had gotten wedged in for 8 days till rescue parties had found him; still alive but completely dehydrated and probably a completely changed man. 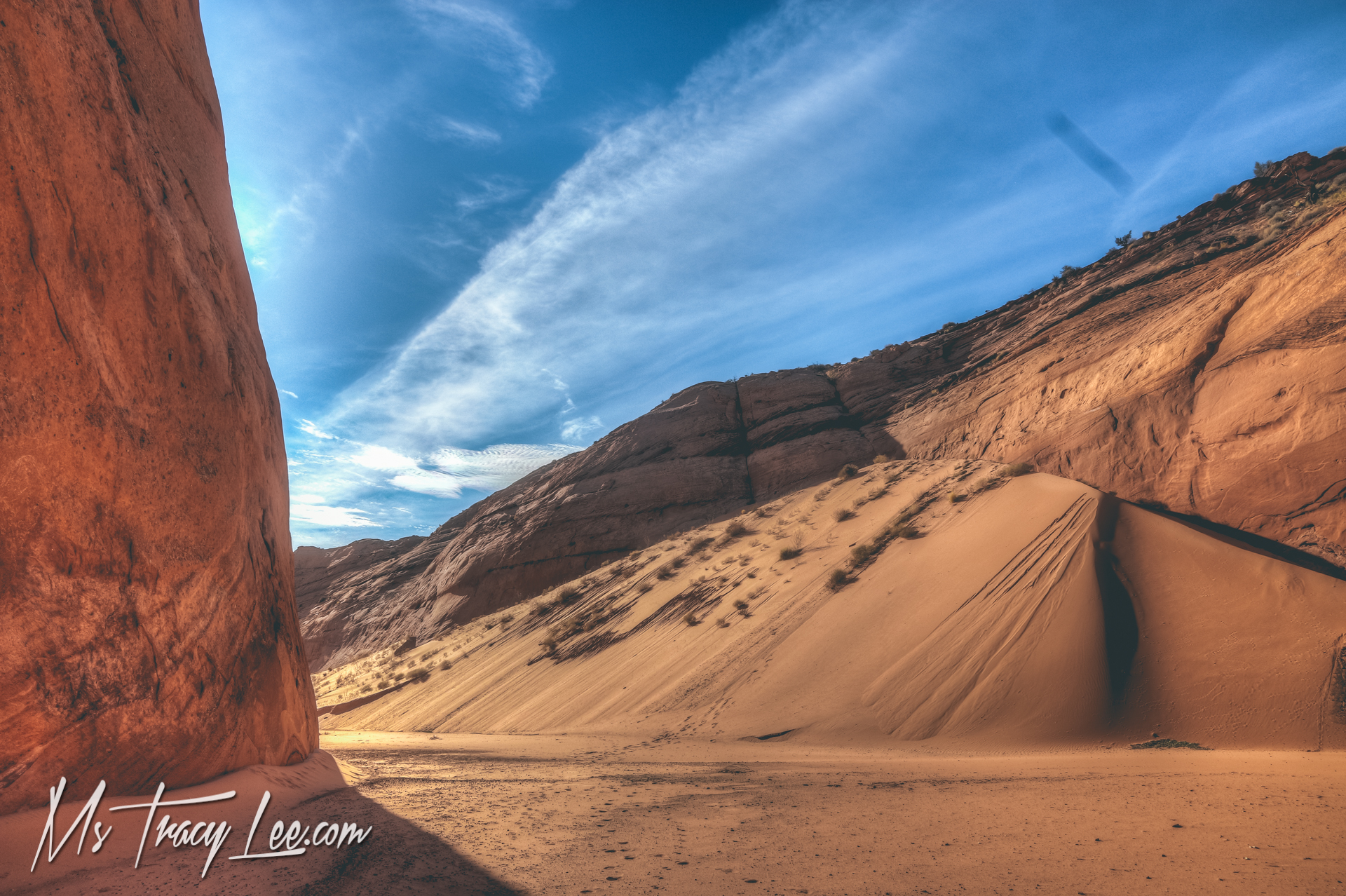 As we made the journey across the tundra to the mouth of our last canyon of the day, Meeko’s exhaustion was beginning to show. But he continued to run ahead and then rest in whatever shade he came across. He would not allow us to pass him; as soon as we were within his vicinity he was bounding off to the next resting area. 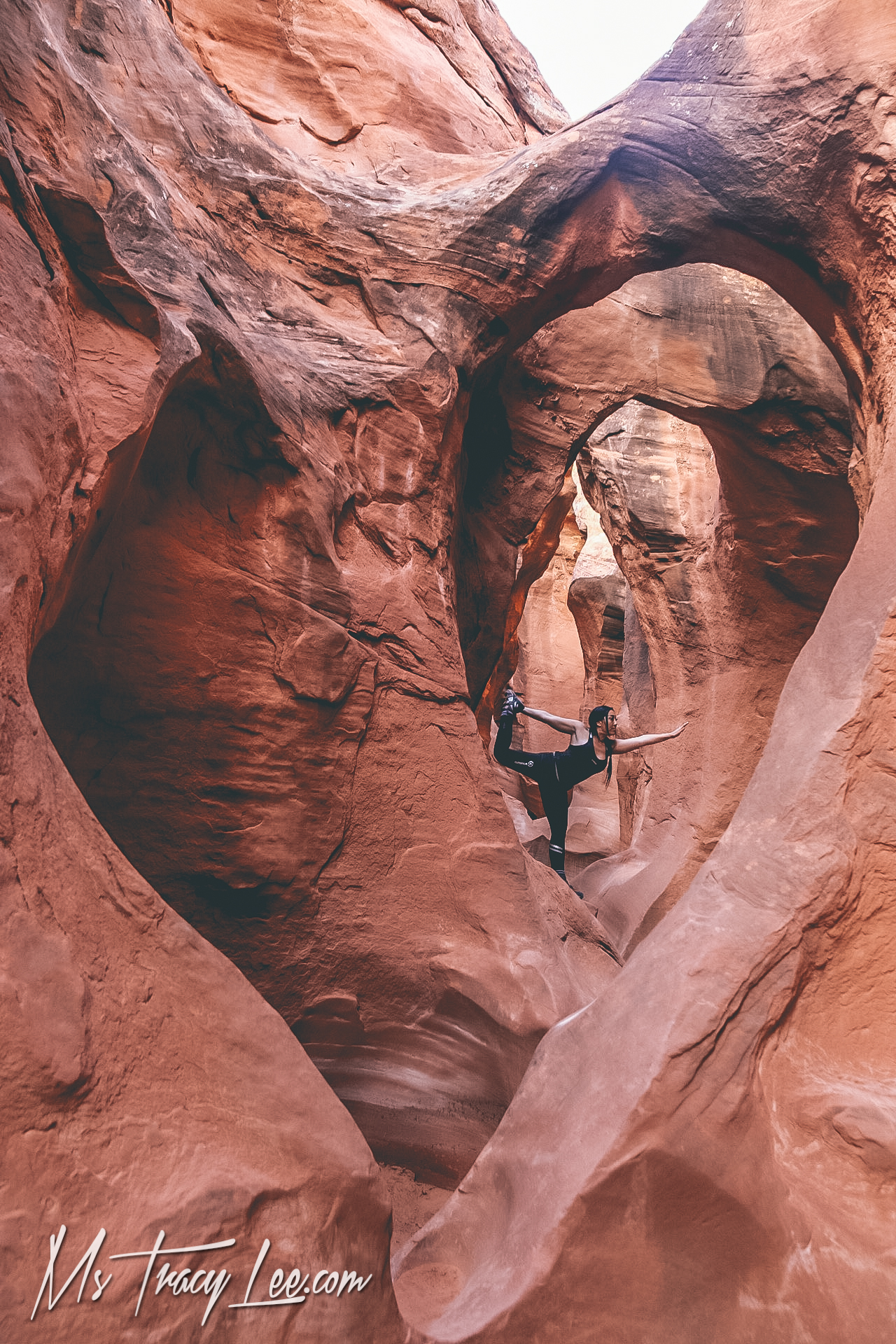 I had said I thought we would make it back to Peekaboo by 3pm prior to even heading off to Brimstone and I was almost exactly right. The entrance to Peekaboo is a difficult climb in, but with a little help we were able to get Meeko up into it. We spent quite a bit of time taking photos in the front part of the canyon where the heart shaped arches are, and after satisfying that urge we continued up farther into the canyon. This canyon was not as tight as Spooky although I felt like I was on a jungle gym like a little kid in certain parts where you had to crawl through tunnels on your knees or go backwards up the slide.. We made it all the way to the top where we were no longer in the slot, but we turned back at that point knowing that the light of the day was beginning to wane. 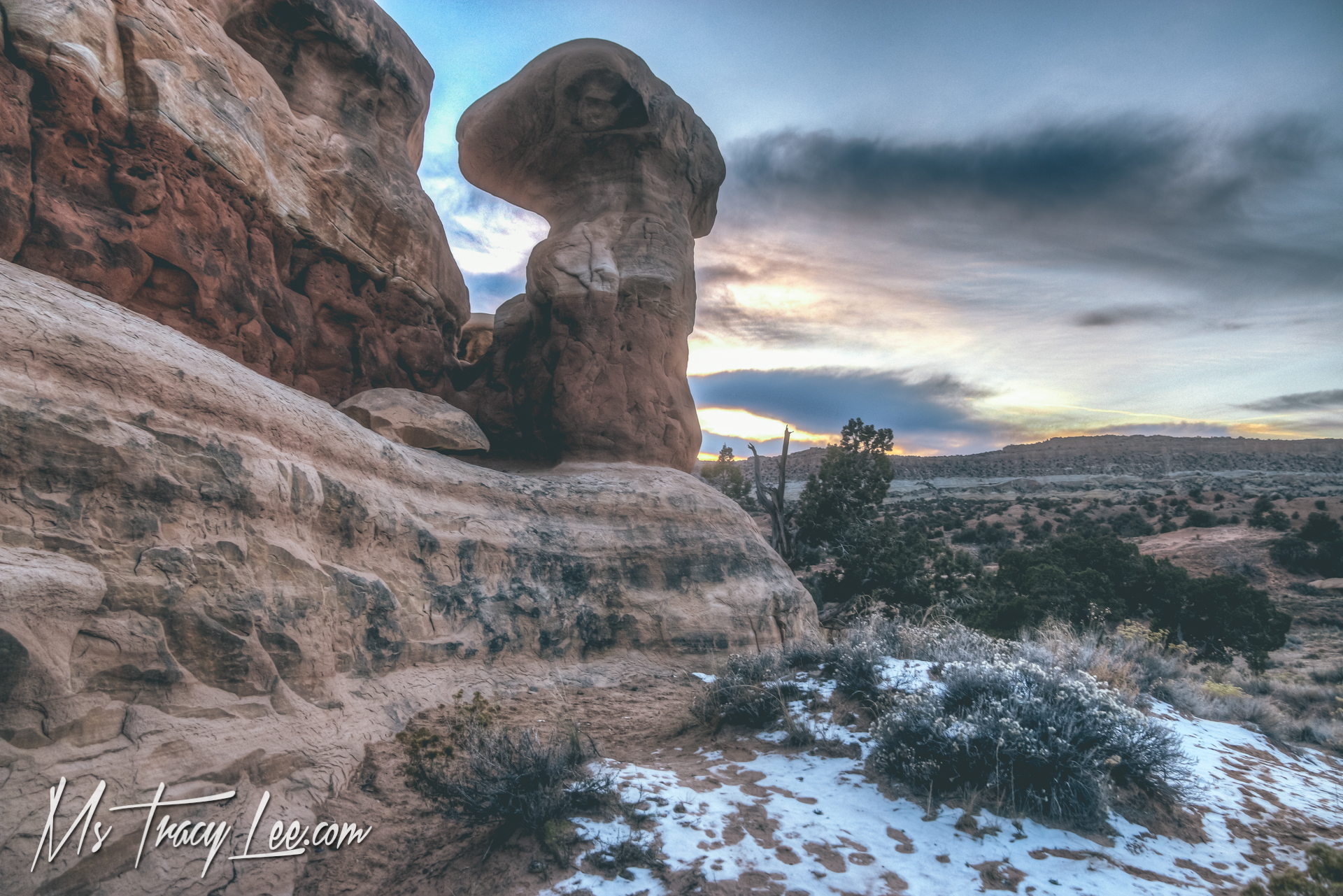 We quickly made it back to the car and made our getaway down the dirt road that was borderline not passable in my Honda Accord 4×4.. We made it safely to Hole in the Rock Road with some daylight left so we made a final detour at the 12 mile mark to see Devil’s Garden just at sunset. We were all really tired at this point and if we had to hike in the half mile to see it, I have a feeling we probably wouldn’t have done it. Lucky for us it was accessible straight out of the parking lot so we jumped out to grab some photos before jumping back in just as quickly due to the 26 degrees it had dropped to. 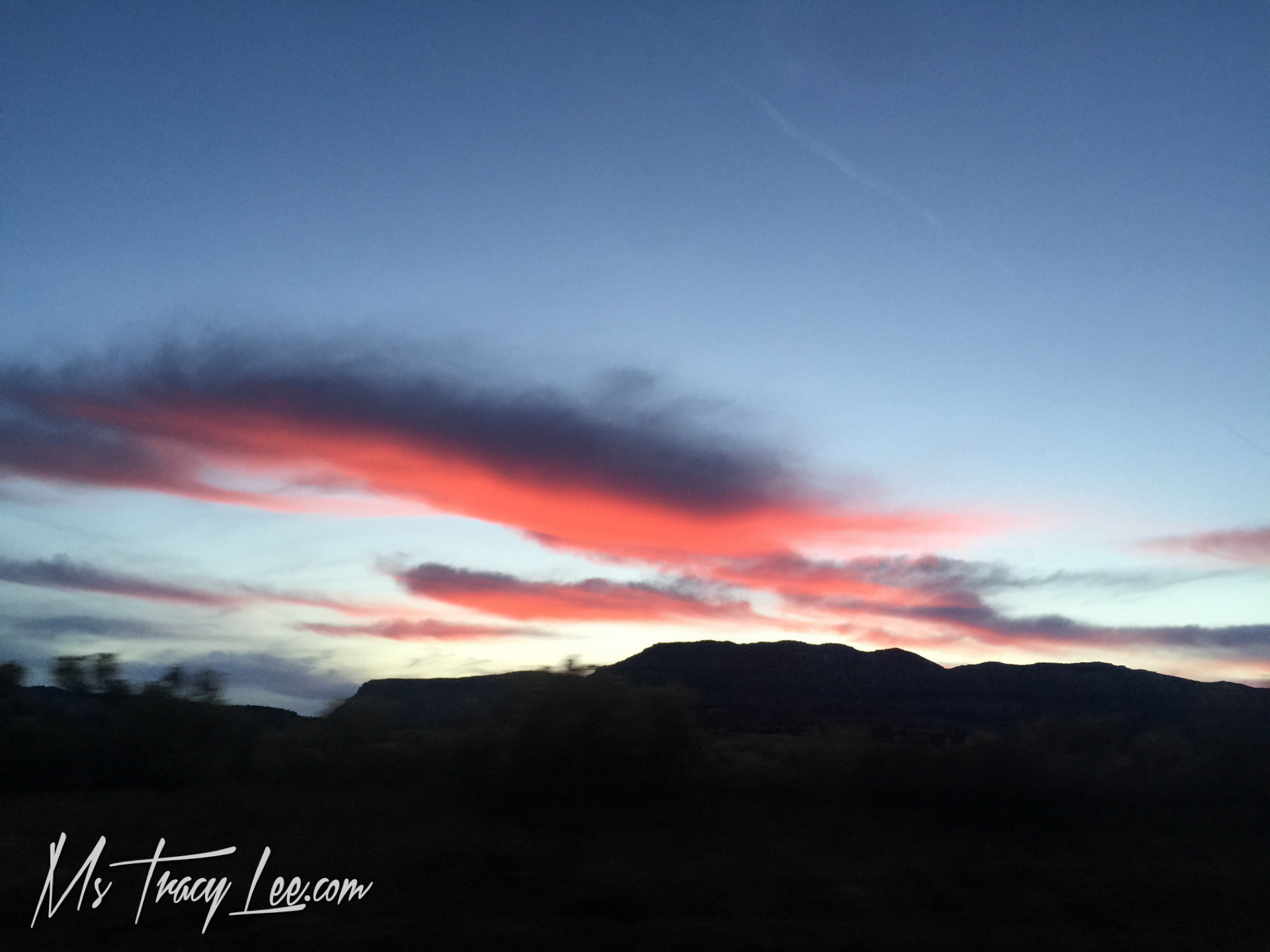 Tired and ravenous, we made our way back into the town of Escalante where we learned that during the winter on a Sunday, no restaurants are open for business. We learned that was the case in all of the small towns we came across through there and weren’t able to get food anywhere until we stopped at Chili’s in Cedar City. 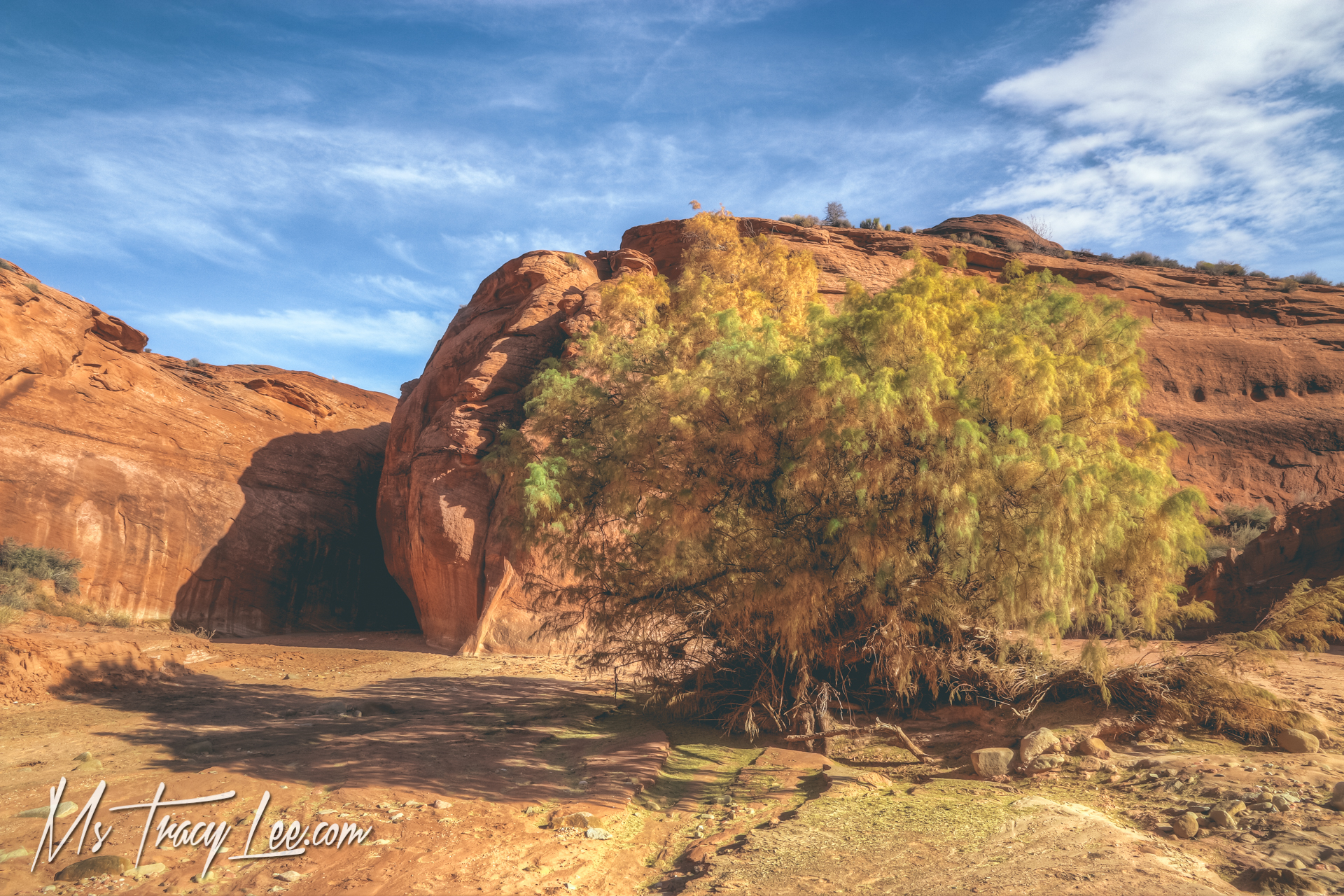 As with any adventure, the time waiting for our food is spent exchanging photos and posting to social media. We realized at this time that we need to go back to Spooky and spend a lot more time taking photos. We felt rushed through by people around us and really didn’t get to take the time to shoot the pics that we wanted. The variety in the canyons we saw that day was impressive and I had already made up my mind up to go back. SOON. Anyone up for this adventure with me in my trusty Honda?? And what about Meeko you ask? Well he was fast asleep the entire ride home.