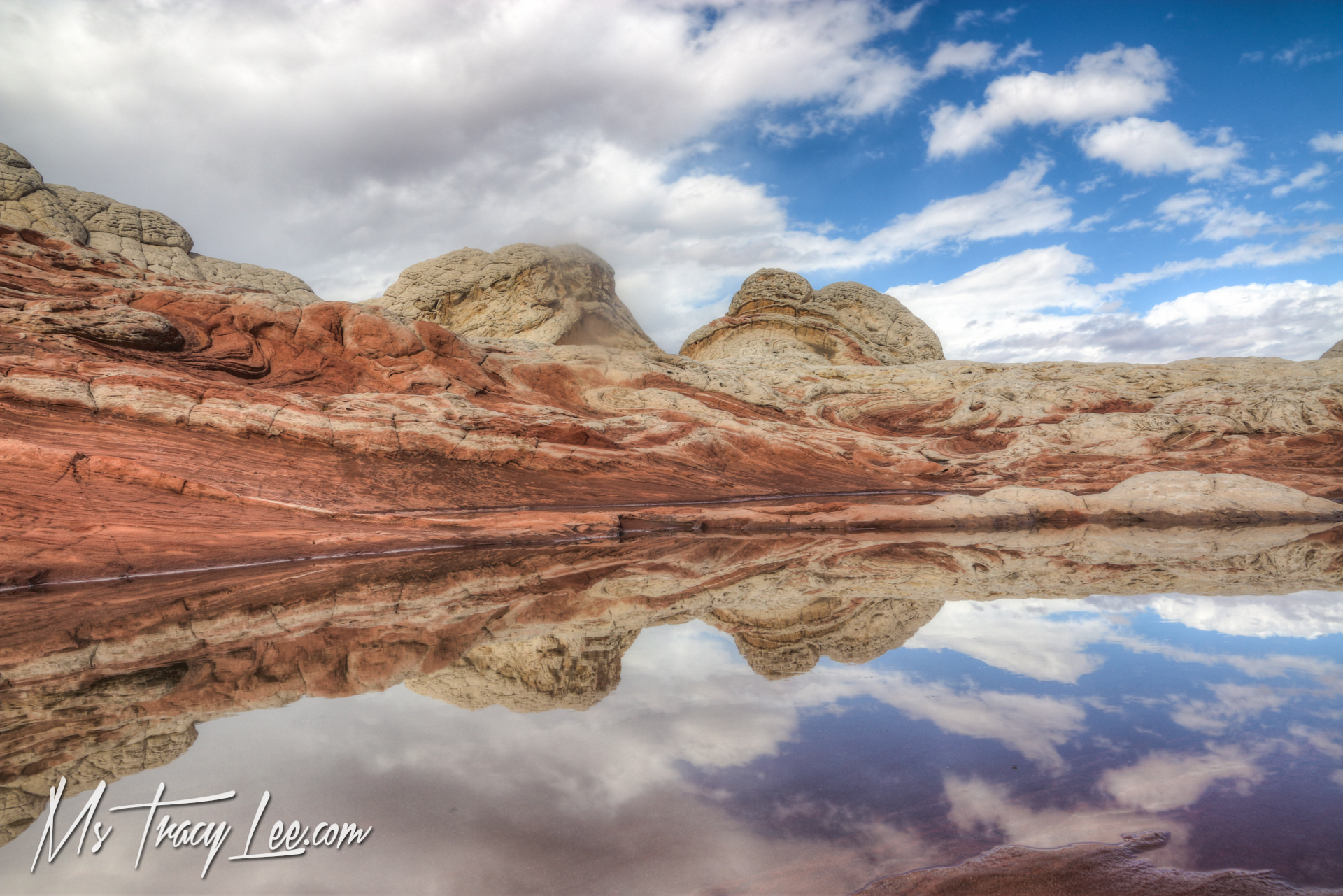 Final Bucket List Trip of the Summer to White Pocket. First off, let’s preface this by saying, I need to go back as soon as possible. That being said, I’d been dying to get here for the entire summer once I had discovered it’s existence in doing research for my Buckskin Gulch trip. I knew my buddy Chris wanted to put some wear and tear on his brand new Jeep Wrangler and it was the perfect place to do it.

You see, to get to White Pocket, you first have to drive about 4 hours into Utah which we did early on Monday morning. We left Vegas at 3am with Chris, Allie, Jason and I stuffed along with camping gear, clothes & food into the Jeep. My other bucket list trip for the year, The Wave is in the exact same area and is said to be close enough to see from White Pocket. We stopped into the Kanab Visitors center to try and get permits for it in the daily walkup lottery for Tuesday morning. 60 other people were vying for 10 spots that morning; we were unsuccessful.

We spoke with the ranger about going to White Pocket that day and he advised to go the long way around to the South end of House Rock Rd (the same road that accesses Buckskin Gulch and Wirepass trailhead). This was a good hour and a half at least to get to versus the 40 minutes to the North end of House Rock rd that from the map seemed to make more sense. But we listened to him thankfully (as you will see later) and took the route and map he handed to us. If it weren’t for that map, there’s a good chance we would have never made it to the destination. The clouds were ominous and over bearing that morning; I was afraid that we were going to have horrible weather for photos. But I always say, I’m not afraid of a little rain so we continued on our adventure that morning.

We stopped at an overlook as we crossed out of the Kaibab Plateau and into the Vermillion Cliffs area. It’s almost as if Mother Nature had drawn a line and the forest was on one side of it, and the desert on the other. Either way, it was beautiful and we had to take a picture. 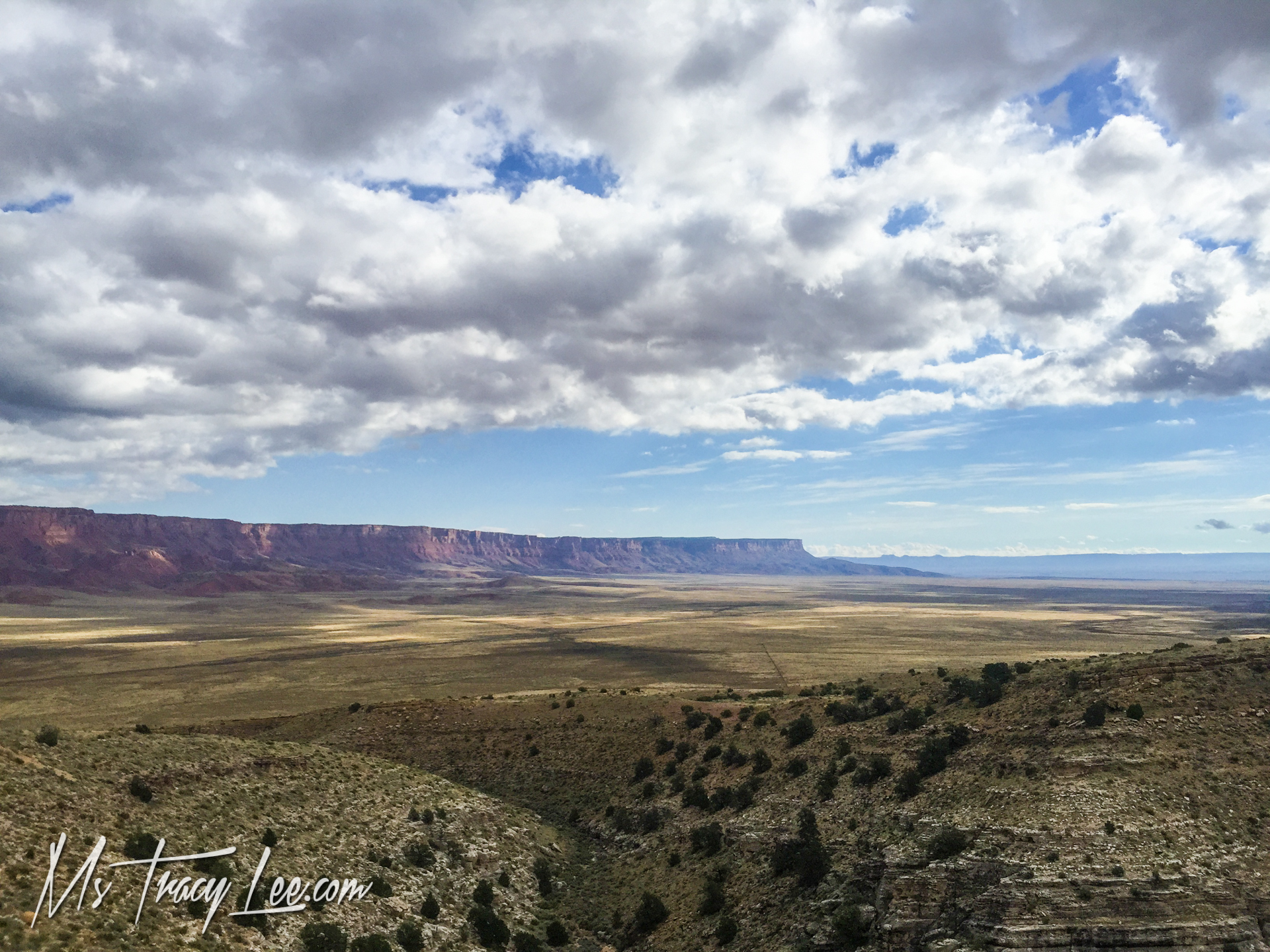 House Rock Rd was at the bottom of the hill and we made our way on to the well maintained dirt road that seemed to almost represent the dividing line between Kaibab Plateau and Vermillion Cliffs. We had to follow along it for a number of miles, before we started to realize we had probably missed our turnoff. I am an excellent navigator and I have to admit that this trek was trying even with my skills. We turned back to one of the previous intersections we had come to and found a very small BLM sign that marked the road we were looking for. 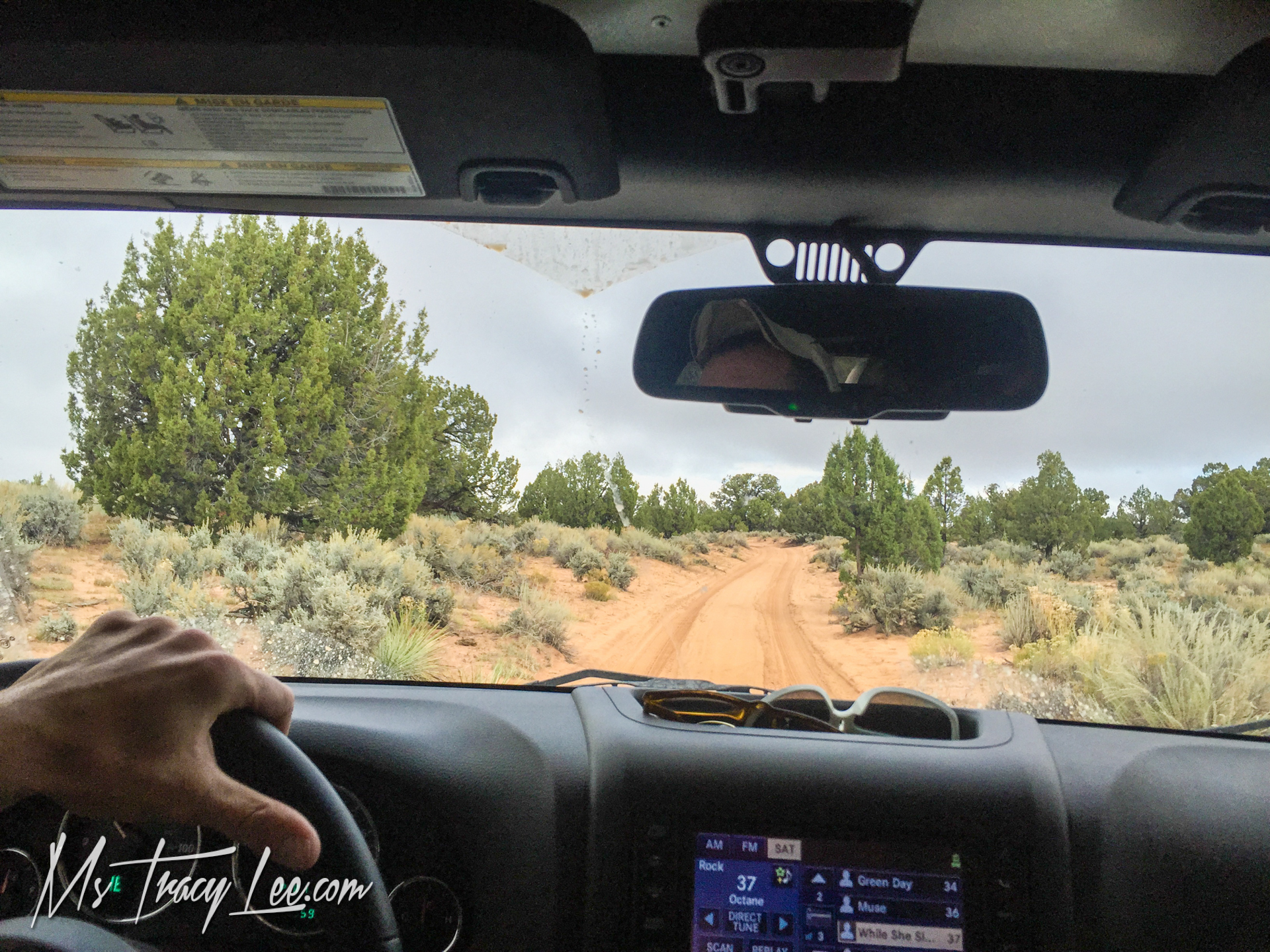 The next sections were the parts that were very necessary to have 4 wheel drive in as the road gave way to mostly red sand. We had to really pay attention to every single road that we came across in an effort to match it to the crude BLM map. I really lost track of time in the mess of roads we traveled down, but I’m guessing we didn’t arrive to the parking area until about noon or maybe even one o’clock. Success!! And, the clouds and the weather were in our favor. 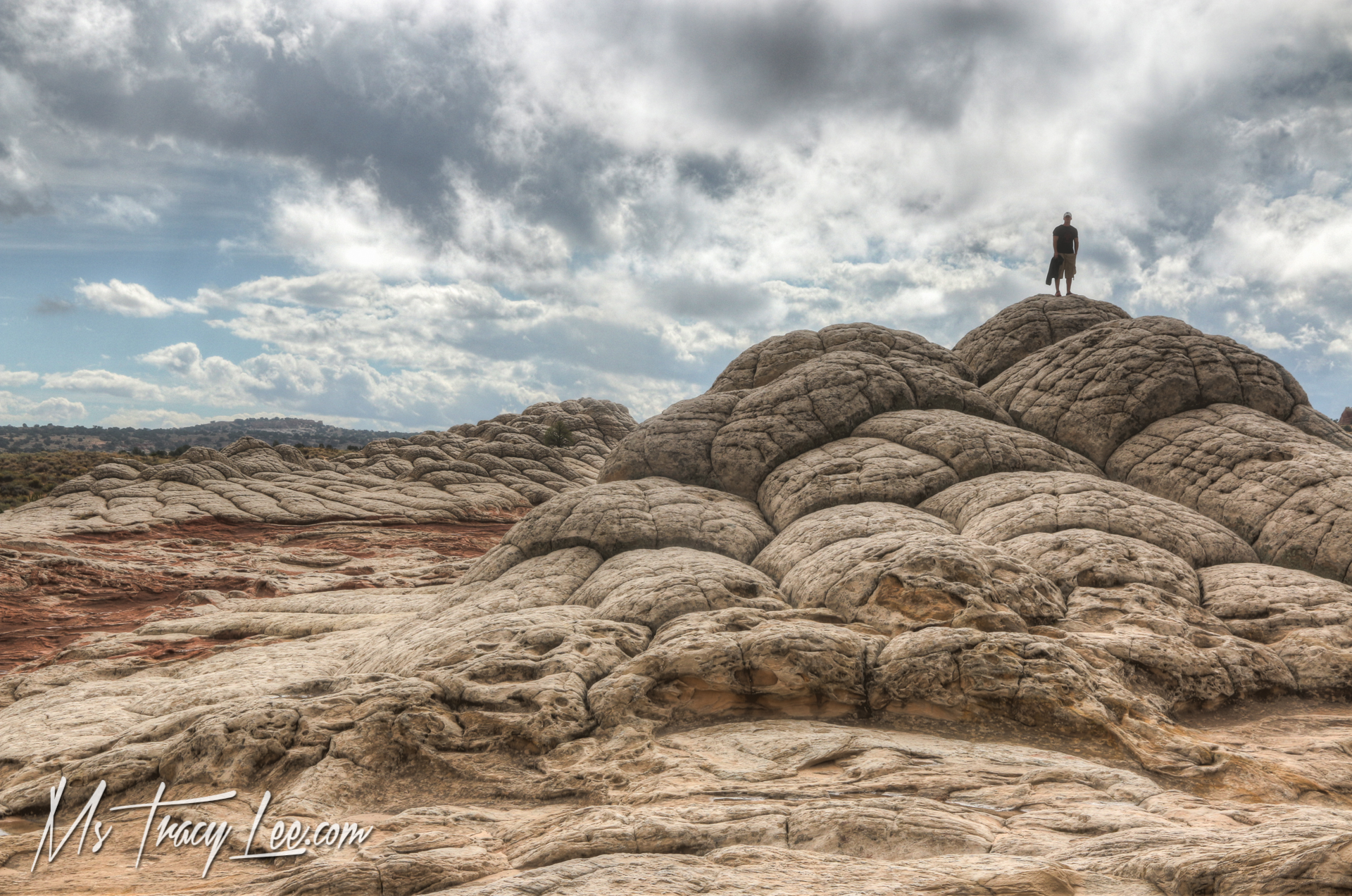 Supposedly, White Pocket was named for it’s White Brain Rock formations and the pockets of water that collect within it’s folds. It was everything I had dreamed of and I spent the next few hours wandering through the less than one square mile of incredible rock fixtures and sand stone formations. I was in my own little world as I moved from formation to formation and set up my camera again and again. Because of the weather I had been concerned about earlier in the day, the pockets were full, and the sky host to many clouds. As a result, the reflections in the pools of water were absolutely breathtaking. As it started raining again, I headed SW across White Pocket in the hopes of spotting The Wave off in the distance; a feat I did not successfully achieve. 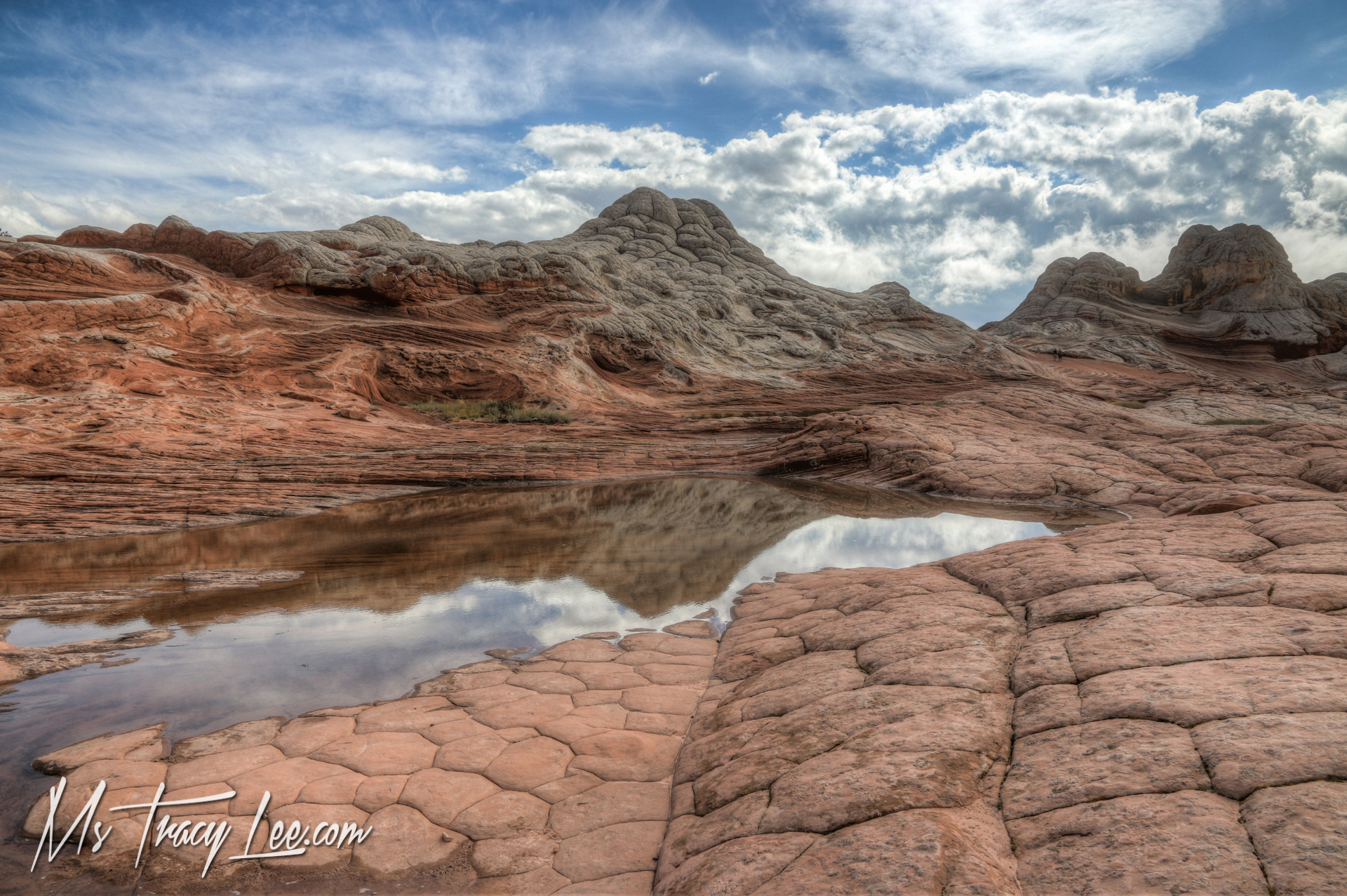 I knew that the type of weather we were in was the perfect recipe for a rainbow. I kept my eyes peeled and it was as we started to head back to the car when the rain made it’s presence known; and so appeared the rainbow I had been valiantly in pursuit of. In spite of the rain, I stopped to capture the multi colored, elusive arch before escaping to the jeep. 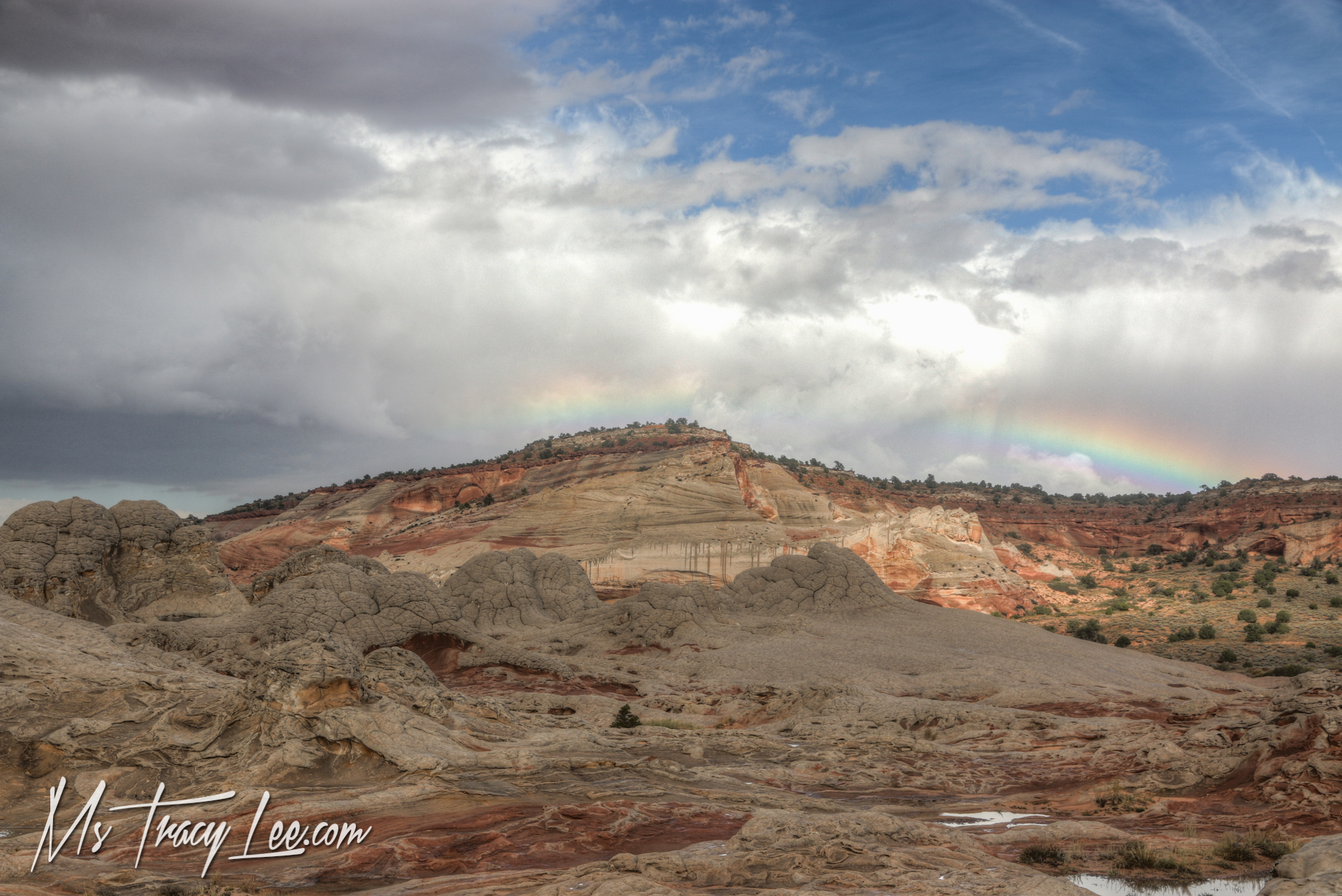 We easily made our way back to House Rock Rd, retracing our steps using the well worn by this time, black and white paper map. I made the call to head North on House Rock Rd to 89 because we were low on gas and that would be the closer gas station for us. South would have taken us out of the way of our night’s destination of Page, AZ. 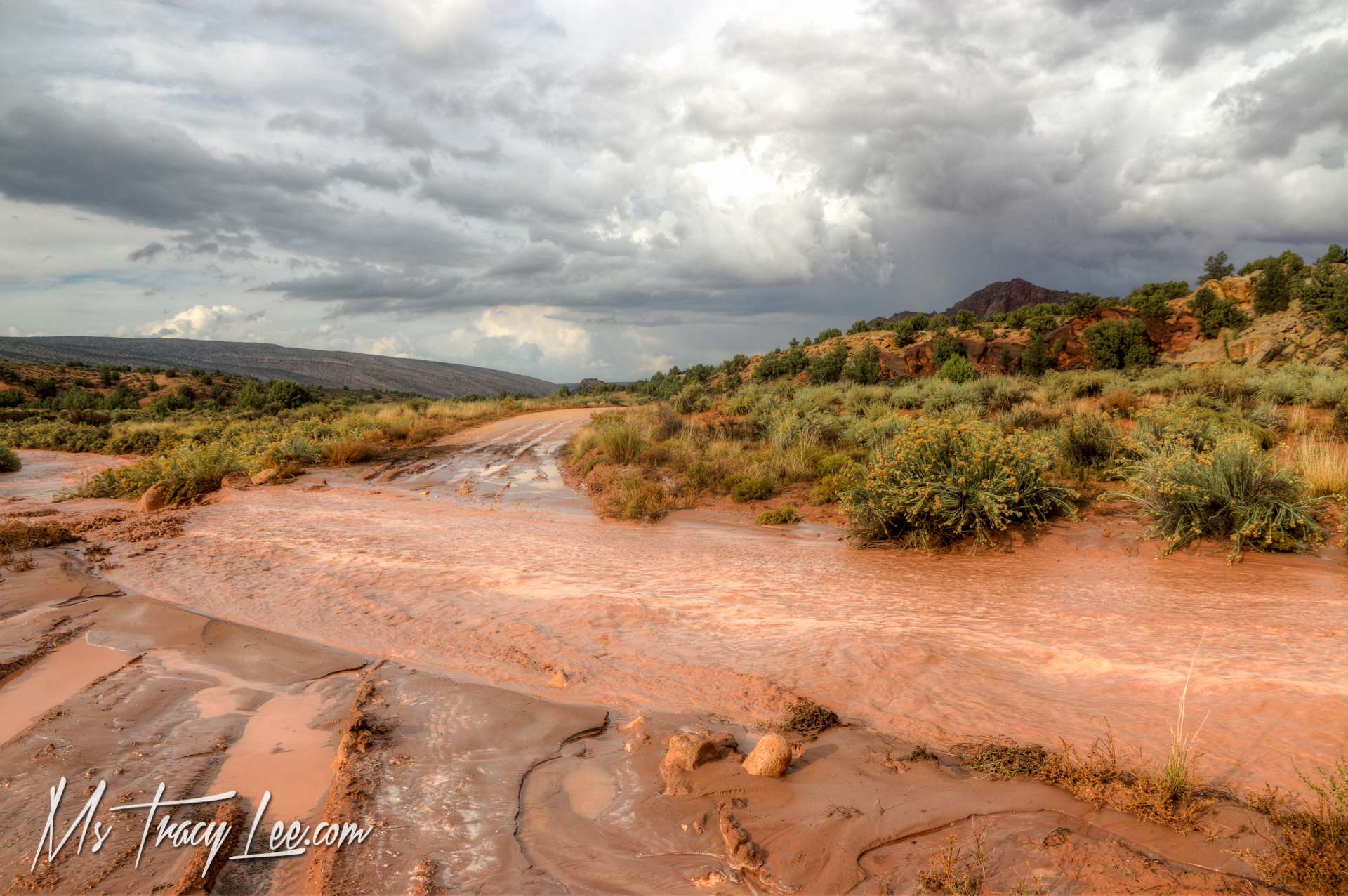 Although it wasn’t raining very hard, after about 12 miles along the road North, the reason for the ranger’s advice to approach from the South became apparent. The area is home to one of the world’s longest slot canyons; a hike that is in the top 10 most dangerous hikes in the US. Buckskin Gulch and Wirepass Trailhead were formed by hundreds of thousands of years of flash floods; just like the one that was washing out the road as we drove on it. We had to cross a number of flooding washes that day; we crossed about 4 before Chris decided the 5th one wasn’t worth the risk. I had a perverse desire to watch the water as it flowed angrily into Wirepass from multiple directions but I know the risks involved and I refrained. Someday, I want to see a flash flood coursing through a canyon with all it’s strength and power with my own eyes; from a safe distance of course.

The blog continues below this set and the next set of photos!

We turned back South. We had a long way to go to make it back to the Jacob Lake gas station that we had passed on the way in. That long way took us the opposite direction from where we were planning on spending the night. On the edge of our seats for much of the drive, we safely (barely) made it to the gas station to fill up.

It was dark out by this time. Since we didn’t get the permits for the Wave, we decided to spend the night in Page and then wake up for the sunrise over Horseshoe Bend. We grabbed a motel instead of camping because cold was one thing, but wet and cold didn’t sound like too much fun and a hot shower was calling each of our names. Free breakfast in the morning wasn’t too bad either.

I’ve only ever done Horseshoe Bend at Sunset. It’s definitely high on my list of favorite places to visit; to the point I’ve driven 4 hours out of the way just to watch the sunset there. The overlook faces west so you watch the sun going down beyond the picturesque canyon. I wasn’t sure what to expect with the sun rising behind us that morning, but it was well worth the trip as you can see from the photos. We woke up and made our way over at about 5am with a stop at Starbucks before driving about 2 miles away to the parking lot. We hiked the 1/2 mile in as the sun was gradually brightening the sky around us. I dangled my feet over the edge as I have done many times before; this time in almost solitude as the cliff’s edge was void of the normal crowd you see there in the afternoon and evening. I got my photos in the even light of the morning before the sun’s rays broke through the clouds to cast odd shadows on the face of the canyon.

The blog continues below this set of photos!

We reluctantly hiked back to the car, went to the hotel to eat breakfast and pack up our stuff, then got on the road back towards Las Vegas. We decided we had enough time to stop at an area called Toad Stools which I believe is self explanatory from the pictures. It was less than a mile each way in to the area and proved to be another picture worthy spot. We were cold, dirty and covered in mud after all of this but I was super happy with the success of the adventure and the photos I got from it. A big thank you to my buddy Chris for driving; I wouldn’t have been able to do this trip without you!!

Previous: Do what you love, as…
Next: I made my way out…