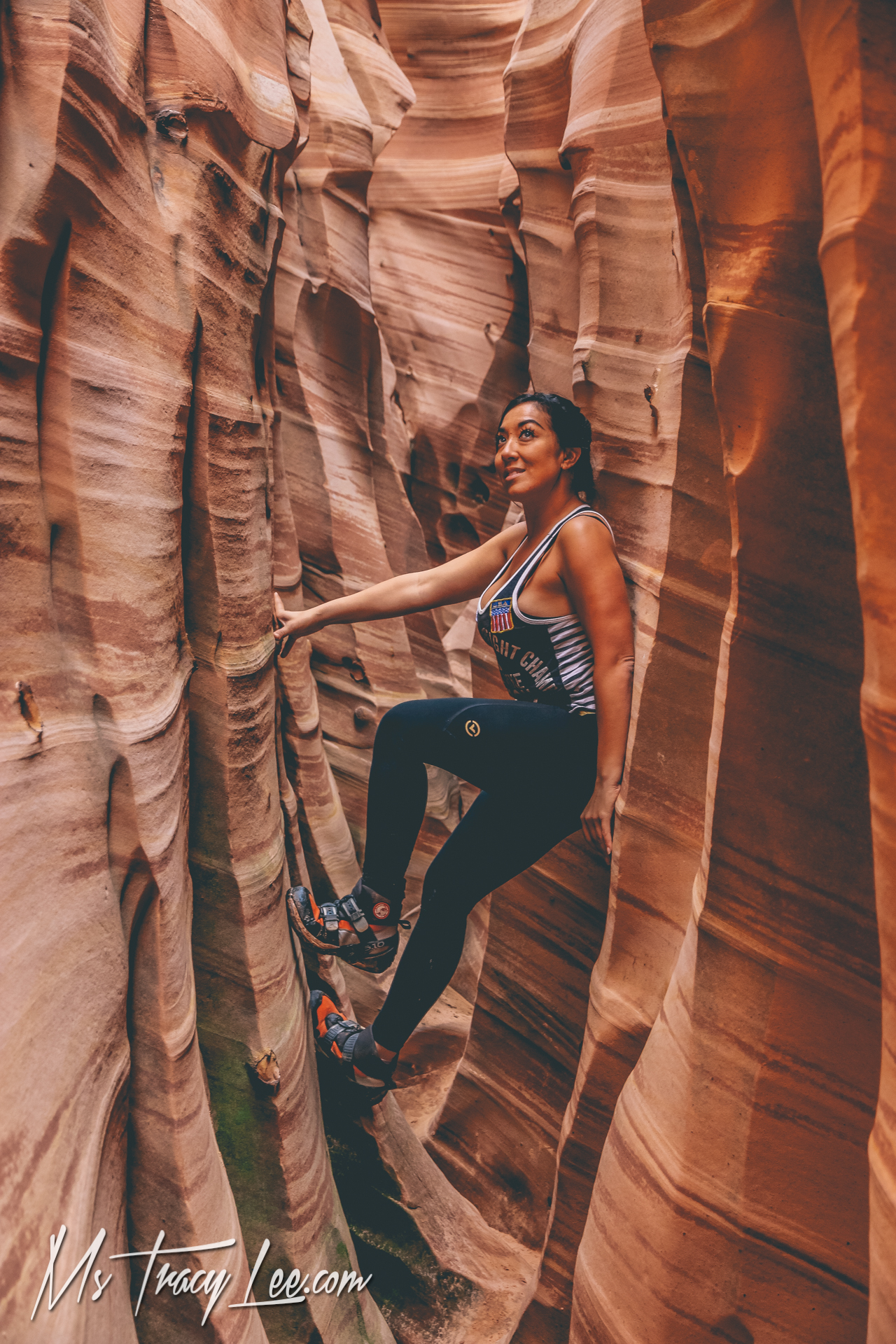 About a week and a half ago on a Wednesday, fresh off my Havasupai Falls trip where I reinjured my ankle, I got an urge to go camping, shoot the Milky Way, and do another hike. My friend Armand’s twin brother, Emil had been in Vegas for a couple weeks and was ready for adventures so I hit him up and he was down to go that night.

I had to get some work done, so Emil met me at my house at 3pm. We filled the tank, grabbed some lunch, and then went to Sport Chalet where I bought a Jet Boil backpacking stove to use on this trip. We stopped at Walmart and picked up a bunch of food for the trip and got on the road towards Escalante. 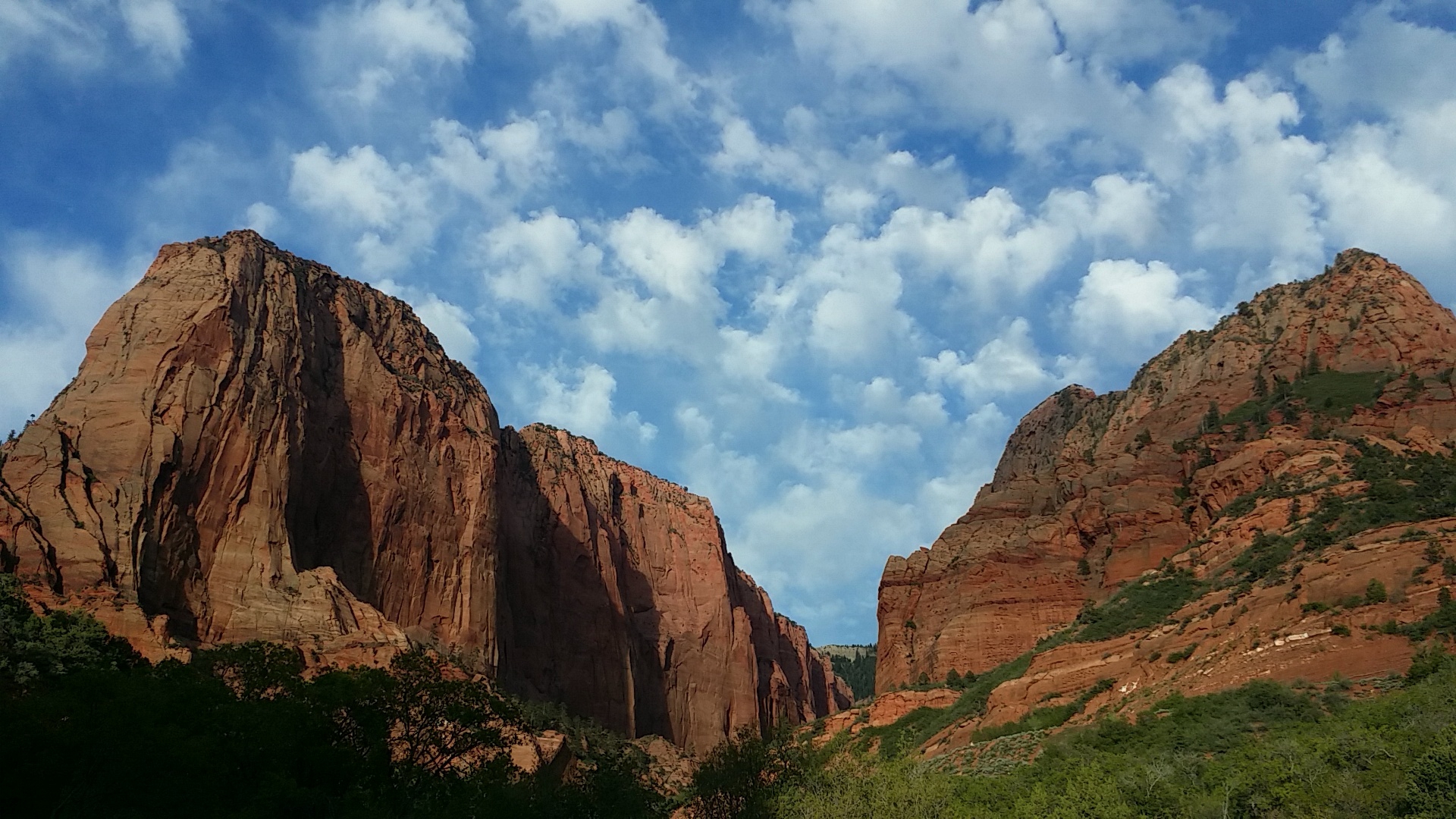 This was a 5hr drive that I already knew well because I did it a month prior when I did my Reflection Canyon adventure. Reflection Canyon hike was 55 miles down Hole In The Rock Road; Zebra Canyon trailhead was much closer being only 7 miles down the famous dirt road. We made our way up the 15 into Utah, stopping in the Kolob Canyon side of Zion because Emil had never been. With all our stops for food, and gas and internet (so I could get work handled before disappearing off the grid for 24 hours) we made it to the trailhead parking lot by about 1am. 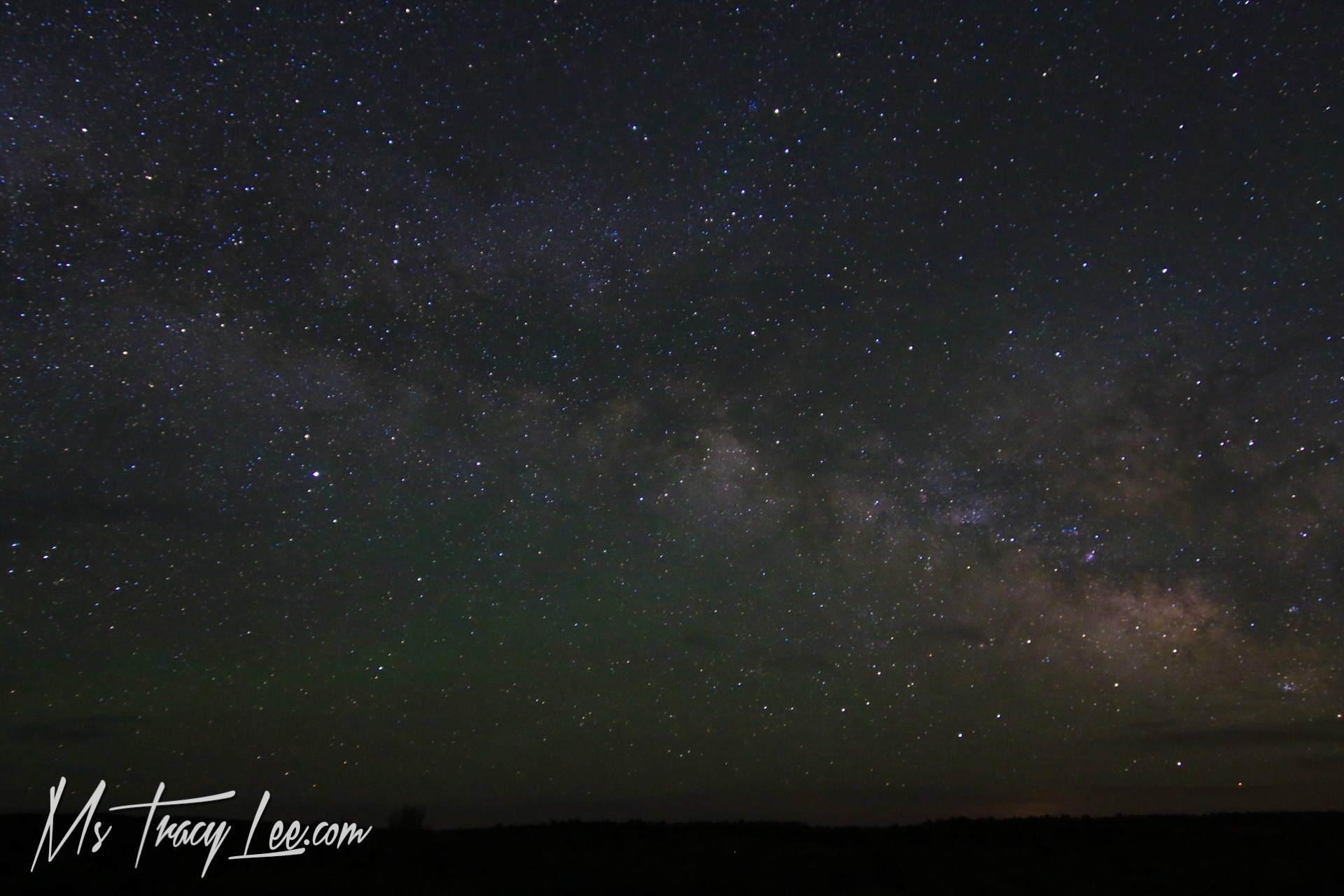 We set up camp using the lights of the car before switching them off to see the incredible sights of the stars and the Milky Way stretching across the sky over our heads. I have never done shots of the Milky Way before although I have driven out and tried to but never gotten far enough from Vegas to do so. It wasn’t the best result given that I didn’t have a chance to hunt down a good location to shoot it, but I was happy to even have a chance to attempt this shot. We crashed out by about 230 am planning to be up around 7 or 8. 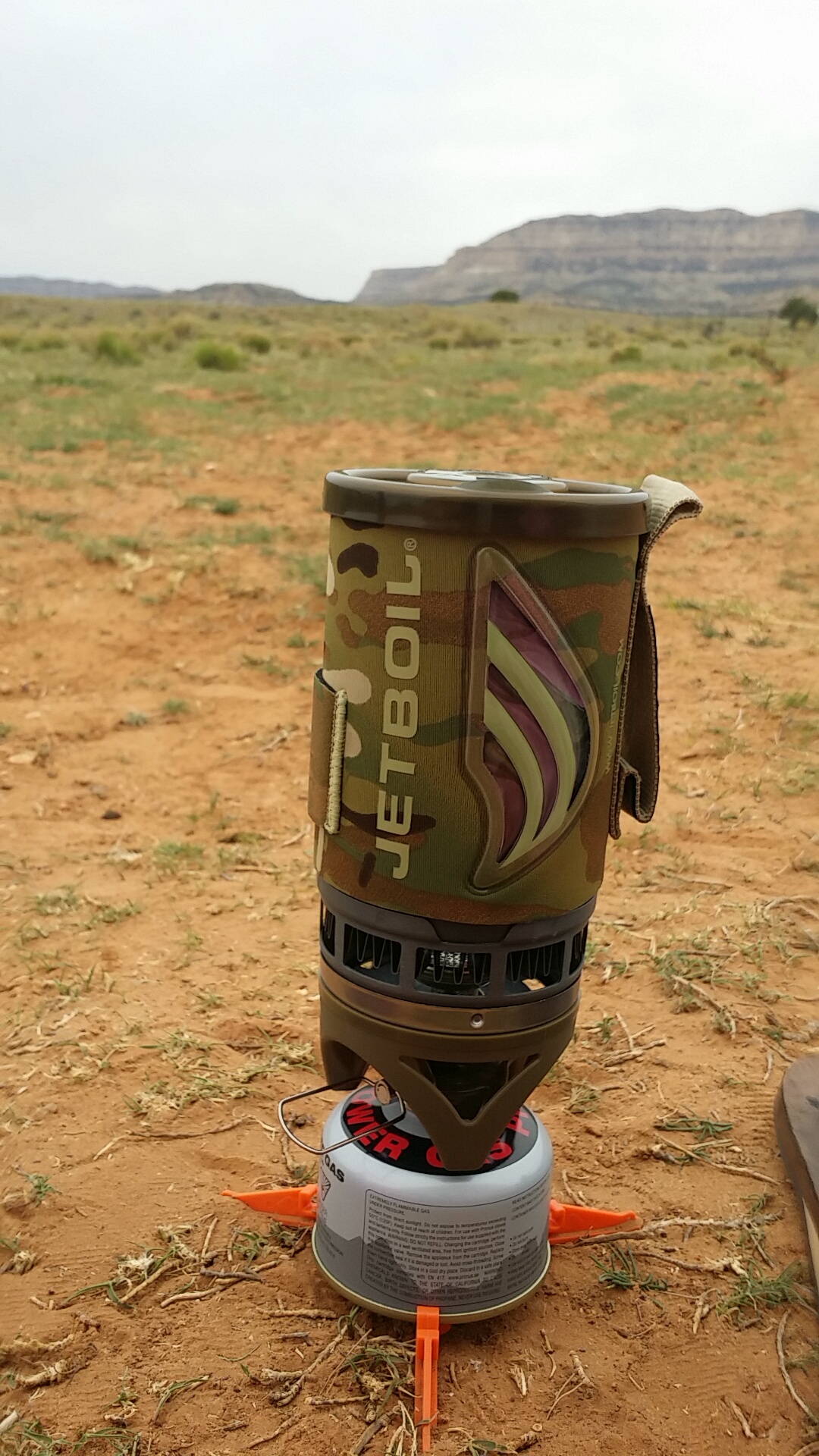 I think I woke up around 6 or maybe 7, I’m not sure. I kept hearing cars driving by on the dirt road we had come in on. Given the remoteness of this road, I was somewhat surprised but there are so many slot canyons and beautiful hikes all access from Hole In The Rock that I should have expected it. I woke Emil up by 8 figuring if we ate breakfast and broke camp we could be hiking by 9am. I broke out the brand new Jet Boil and boiled some water to cook our freeze dried breakfasts we had picked up at Sport Chalet. We cleaned up, broke down our camp and were on the trail by 9:10.

I had Dr Denny’s approval to continue hiking in spite of my injuries. He showed me how to wrap my ankle in a way that would support it and keep me from re-rolling it again. And it worked- I made it the entire day with no issues. My hand was a whole other story that had started bothering me 2 days prior. I tried to pay it no attention and push away the frustration I have with all my injuries as of late.

The entire hike was supposed to be about 7.5 miles RT.. That included doing a loop with Tunnel Canyon. I had gotten some directions off the internet on how to do the loop, but if you want to know the truth, we would have probably been better off without them. The trail was VERY defined and once we got to Harris Wash, the instructions we found made it more confusing than it needed to be. All we had to do was take a left and follow this wash all the way into Zebra Canyon. I’ll list complete instructions at the bottom of this blog. 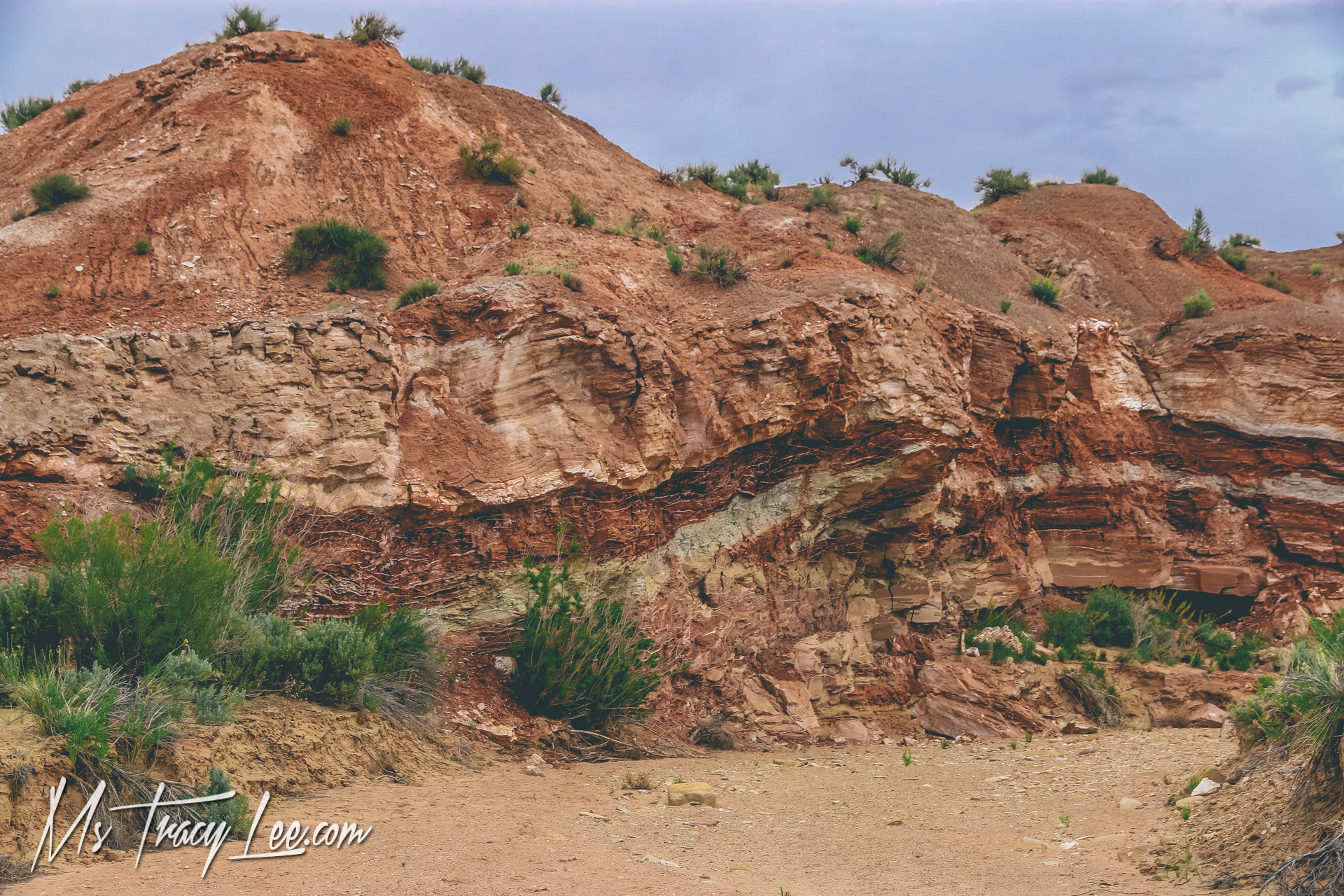 The first part of the hike wasn’t even very pretty at all.. Eventually though, the wash gave way to beautiful rock formations and tons of moqui marbles everywhere. Much of the hike was in sand, so our legs were very tired from trying to dig in to make significant steps and keep a good pace. But the canyon was definitely worth it. We entered the narrows and found that we had to wade through calf deep water. I also was surprised at how narrow the slot was near the entrance to the most picturesque part of Zebra Canyon. 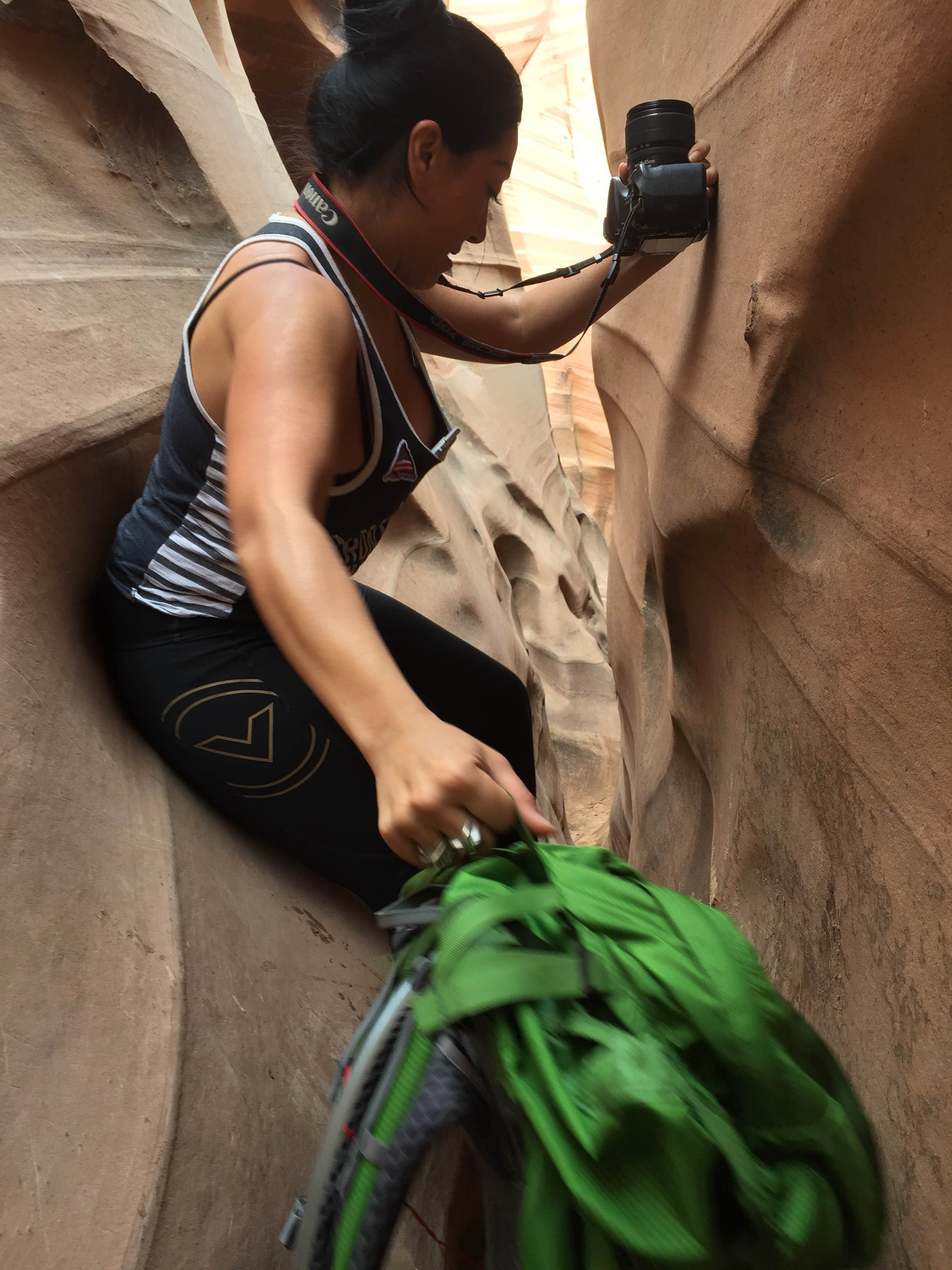 I went very cautious at this point- my ability to put weight on my left hand was minimal and stemming with my ankle was also an issue. It wasn’t wide enough for me to go straight in either; at one point I had to remove my pack and drag it along next to me as I navigated the smooth narrow passageway. Tell you the truth, it was much more narrow than expected and I was glad I hadn’t brought any of my claustrophobic friends along unknowingly. We came across a couple from Europe leaving the slot at the same time as we were going in. Almost as if their reservation were up, and ours had just come available. 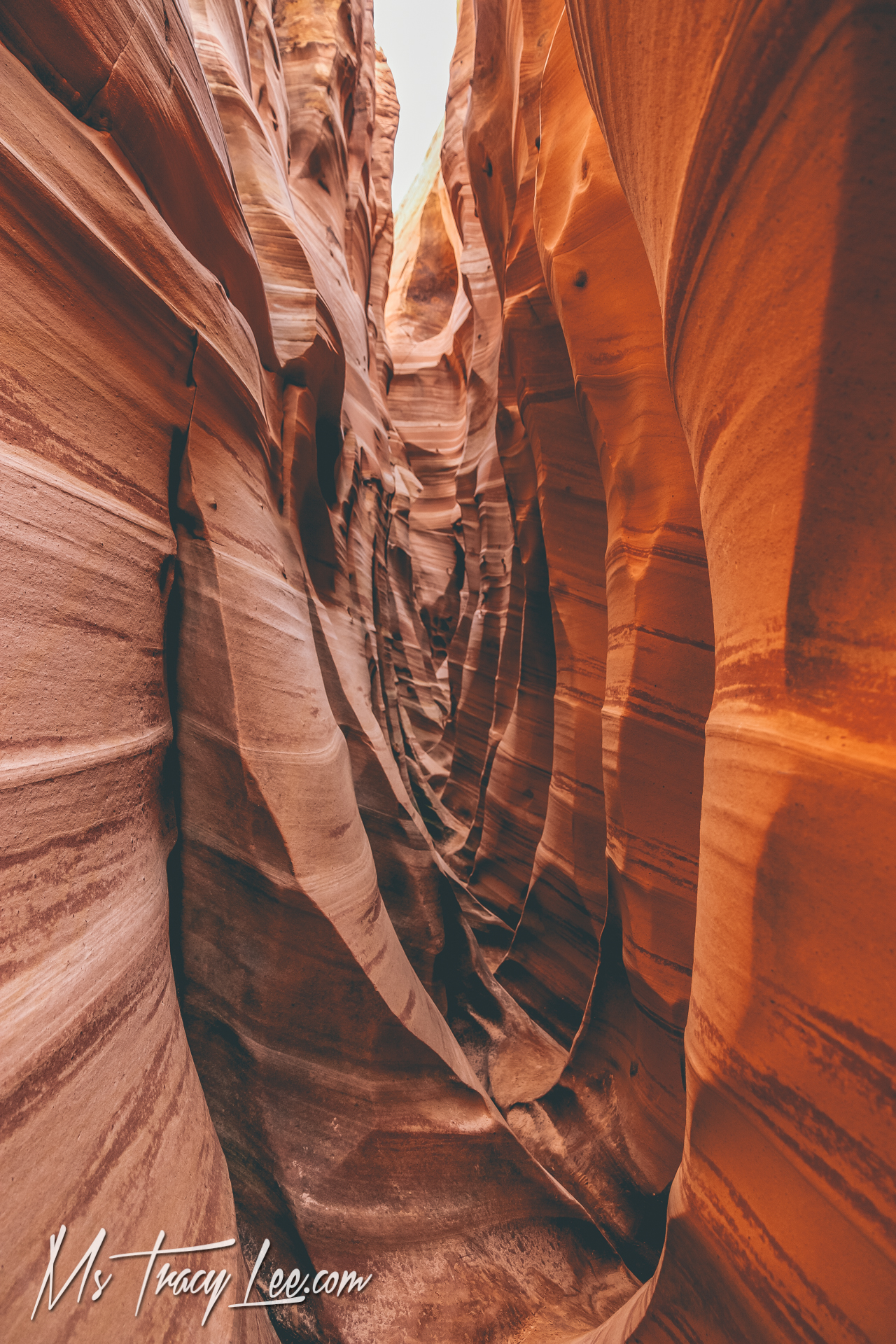 It was beautiful… You can look at all the photos online and see how pretty it is, but being there is a whole different story. To feel the smooth walls, and to climb through the canyon’s sinewy turns; it was different than any slot canyon I had been to thus far. It’s a rather short canyon; we walked to the back of it and Emil climbed up to an upper section to see what was back there but a deep, brackish pool impeded him from continuing on. Thankfully because I would have wanted to explore but again my injuries were holding me back. 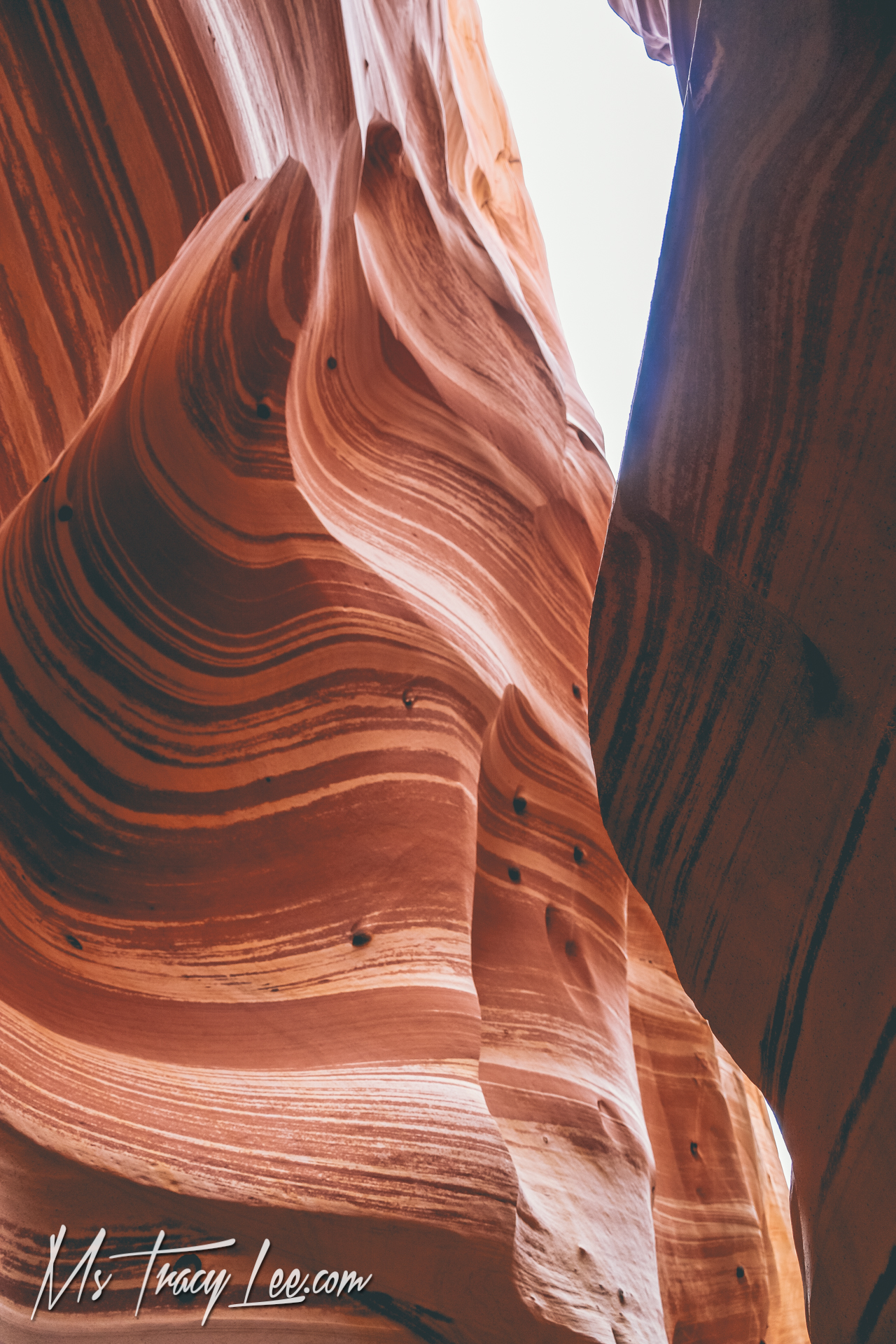 It was just before noon and the sun was starting to throw its beams down into the canyon. We decided to have a bite to eat and then we basked in the rays that had already started to fall to the front part of the canyon. I wanted to see what Zebra would look like with the sun overhead but it wasn’t in the cards that day. As we relaxed into a curve in the wall while soaking up the heat, we heard voices approaching the canyon entrance. The clouds started to roll in overhead at that point too and I knew that what I wanted to see was no longer going to be available. We greeted the two hikers and as we exited out of the canyon we could see that it was not a lone cloud overhead; the sky was filling quickly with dark and foreboding beings. 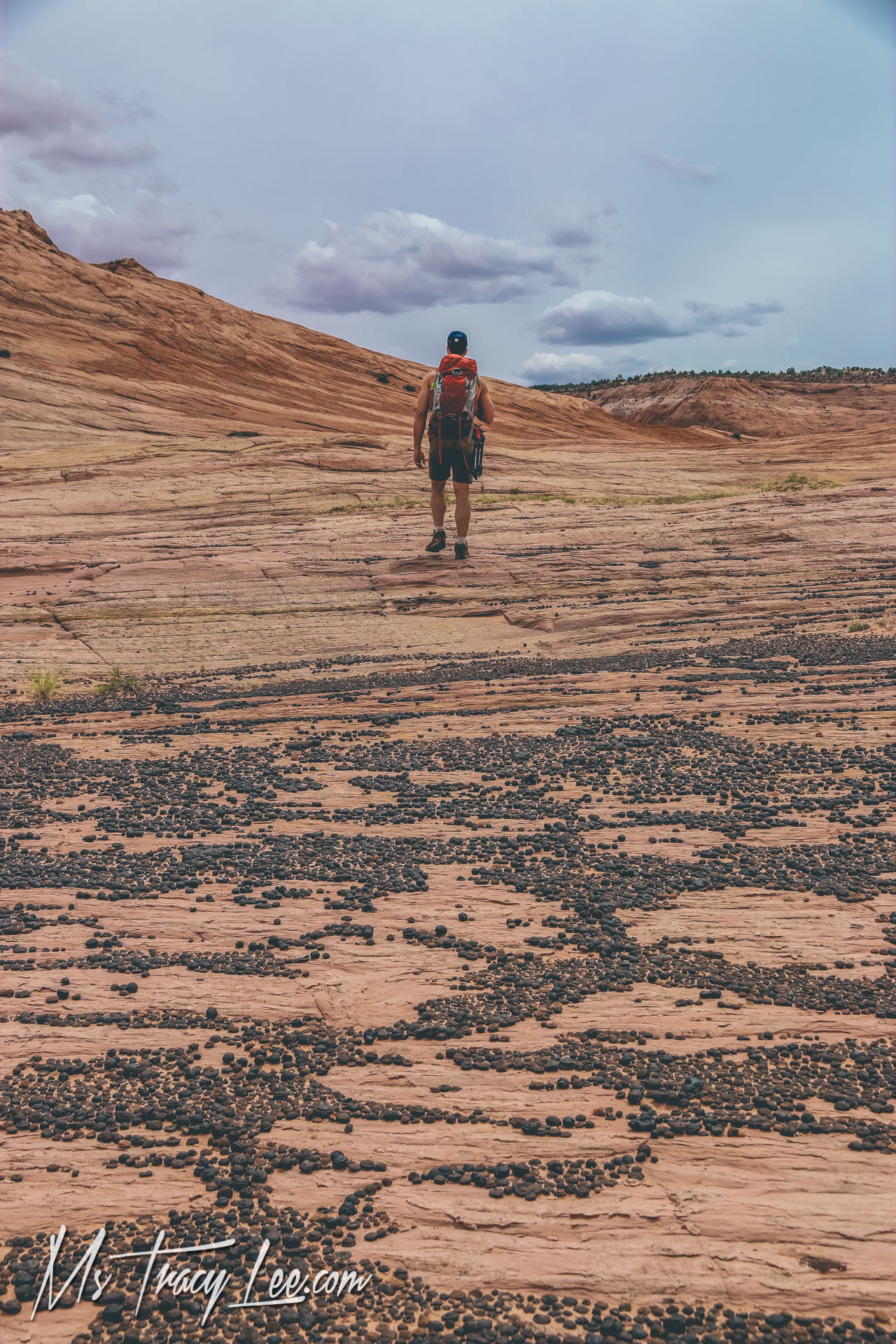 We followed the directions from online to attempt to go to Tunnel Canyon and we definitely found the correct route across the slick rock. But down climbing to the upper part of tunnel looked extremely difficult (lots of bush whacking it seemed from where we saw) and as we skirted along the top of the canyon to see how to get to the lower end, we realized that the way to go around was a very long journey. So we decided to call it a day and head back to the car. 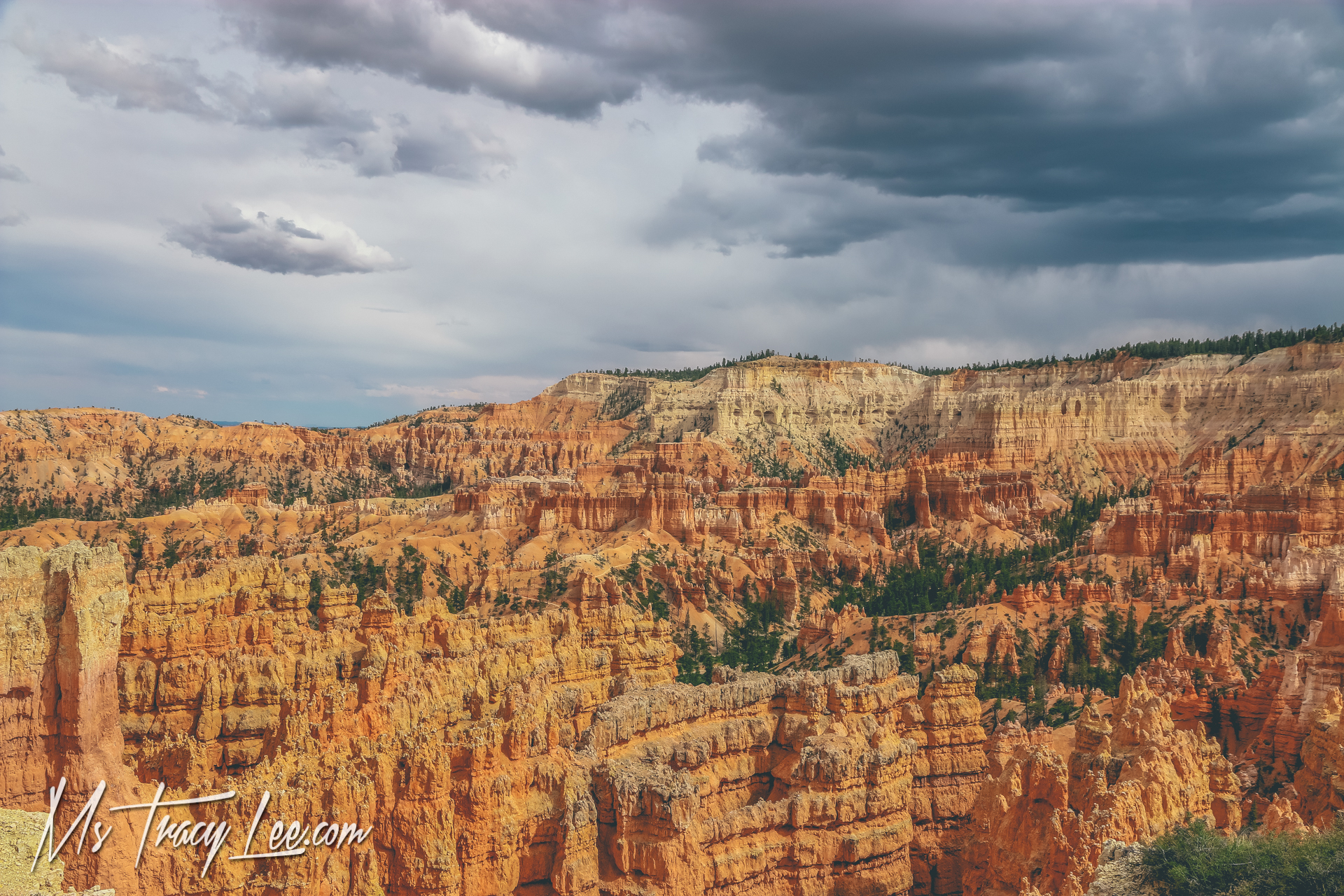 Our journey wasn’t finished once at the car. I decided to drive us back through Zion on the way back and hopefully catch it before dark. One of the best purchases I have ever made was the National Park season pass which for $80 got me in and out of all of these $25 a day parks all year long. That being said, we made a detour through Bryce Canyon to Sunrise Point where we snapped a few photos, saw some desert big horn sheep, and continued on our adventure. Once in Zion we pulled off on the side of the road and parked near a slot canyon I had always spotted while driving by. I was very disappointed to see because of it’s easy access, it was covered in graffiti that had been scratched into the rock. 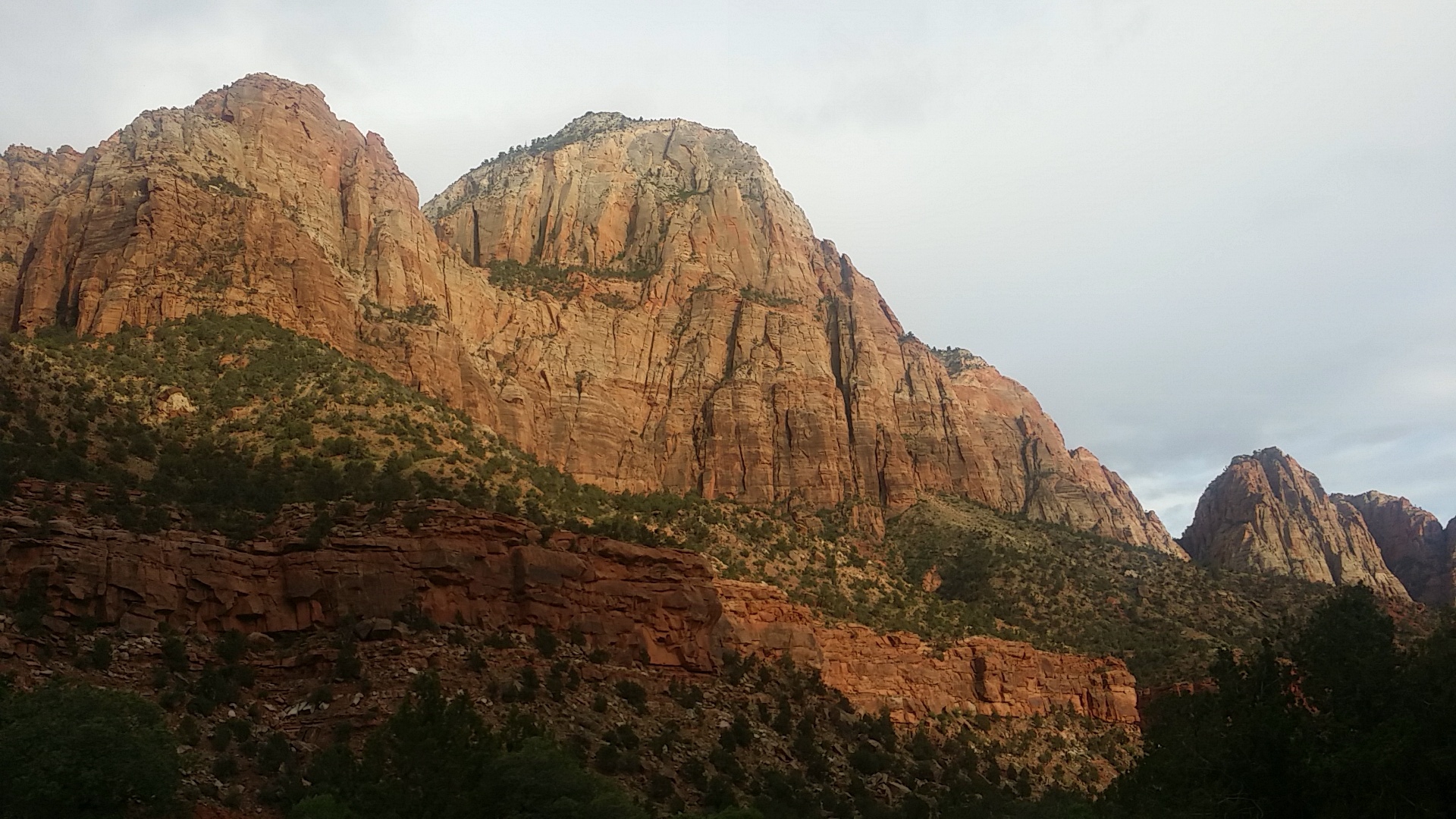 We stopped at a few more view points along the way before exiting out the opposite side of Zion into Springdale. We grabbed dinner at the Zion Pizza and Noodle Company as sunset was falling over the park before getting on the road back to Vegas.

To get to Zebra Canyon, we drove HWY 12 through Escalante about 5 miles out of town. Took a right onto Hole In The Rock Road and started clocking my mileage. At almost exactly 7.5 miles, right after the 3rd cattle guard you drive through, the parking lot is on your right. The trail starts directly across the road from the parking lot. It is VERY defined and while it crosses over the wash a number of times, it’s best that you follow the trail and not the wash. After 2.5 miles or so, you will reach Harris Wash. It’s a huge confluence that you absolutely can’t miss. Turn left for Zebra Canyon or right for Tunnel. We chose left obviously and once you’re in the wash walk straight until you end up in the narrows for Zebra. When leaving back out, you can choose to turn left directly after you leave the narrows to head towards Tunnel Slot, but the easier and longer way would be to stay in Harris Wash and follow it around for about a mile till you see the wide canyon on your left. You pass your initial trail in when you do so. There are plenty of cairns left by previous hikers and should be intact until flash flood season starts. NOTE: Slot Canyons are extremely dangerous to hike when there is any threat of rain; even if it’s 50 miles away. Please make sure to check all weather reports and flash flood warnings before hiking through slot canyons.

Hope you enjoy the pics! Some of them are camera phone pics courtesy of Emil. Photo credit to him for any of the ones I am in!