Officially Shiprocked Day One of Four

Officially Shiprocked Day One of Four 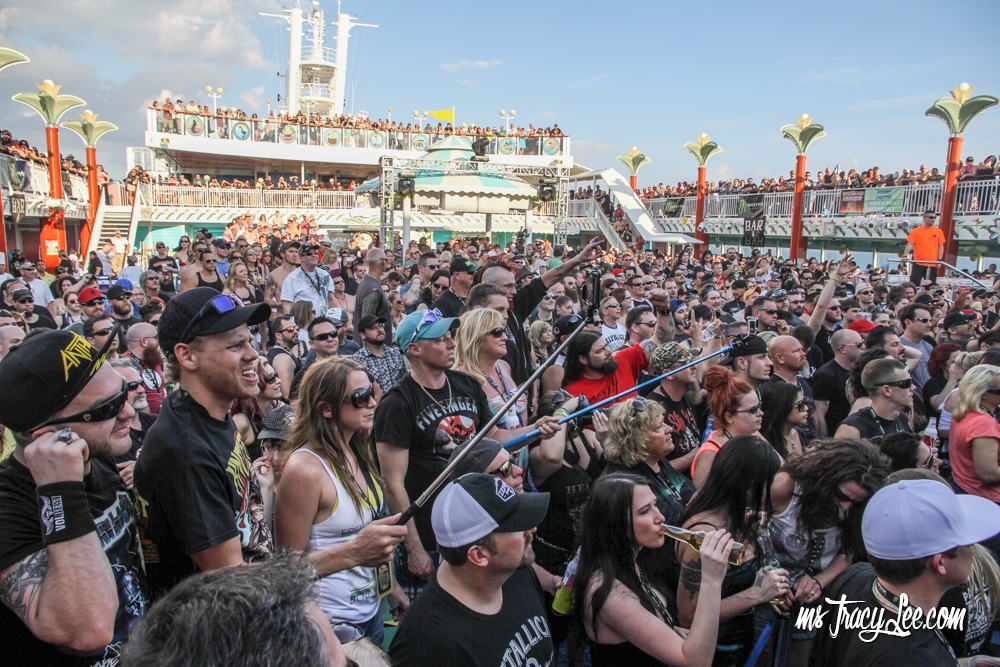 Officially Shiprocked Day One of Four was actually day two of five for me if you want to be technically correct.. When it came to the “actual cruise” it was day one of four.. Sound confusing? It really wasn’t; I just have to back up a little bit to explain..

I’m a the former photographer of a brand of party cruises called The Groove Cruise. I have known the founder and creator, Jason Beukema for the better part of a decade at this point.. I have missed all of the Groove Cruises in recent years due to the fact that I have spent much of my time chasing half naked men who punch each other in the face around the world with my camera. Somehow Jason and I reconnected and he invited me on the Groove Cruise my birthday weekend. As usual, this fell on a fight weekend, as well as my birthday so as I respectfully declined, he fired back with, what about Shiprocked? As we chatted on the phone, I went to Shiprocked.com to check out the itinerary. “Sold!” I said.. 4 days on a cruise ship with 26 bands, some I had heard of, many I had not. At that moment, the cruise was little over 2 weeks away and started the day after my birthday, on February 2nd. This cruise had a unique twist though; a preparty on the ship day before the ship actually was scheduled to set sail. This would mean I would miss Superbowl Sunday & my actual birthday in Las Vegas, but the idea of being on the ship for the preparty was enticing and I booked a flight into Miami for Sunday afternoon.

(above photo taken by Shiprocked Photographers)

Now knowing what I knew about cruises, I figured there were bound to be theme parties on the ship.. Me being a costume and Halloween junkie relished the thought of dressing up; I quickly found that every single night including the preparty had a theme. Five costumes to pull together in a very short time and an extra bag to check; such a simple task for a costume addict such as myself. In spite of my usual preparedness,I had a severe lack of sleep in the days leading up to the cruise. I went to the UFC Fights on Saturday night, and then went home to finish packing. I don’t recall lying down; but I do recall waking up at 5am for my flight that left at 6. I hadn’t finished packing so needless to say, I was late and missed my flight.

Only flight option I had was to fly stand by at that point, or pay 50k miles. I went stand by and didn’t get on the only other Delta flight that would make it in time to get on the boat for the preparty. I ended up hopping on a direct flight on American which was supposed to be $500 for the one way. Well the lady sold me a flight to Orlando which laid over in Miami. It was only $260. I just didn’t continue on to Orlando. That’s a travel tip if I’ve ever heard one!

After being assured I had time to go buy some water if I hurried, I ran past Adrian Patrick of Otherwise and grabbed a quick hug. Looks like I was on the same plane as the band en route to Miami. Water in hand, I sighed in relief as I boarded the plane and settled in for the 5.5 hour flight across the country..

I’m not going to bore you with the details of trying to get my bags and get on the ship. I’ll just say I did it, and boarded the Norwegian Pearl without too much more trouble as my day had boasted. I needed food and some downtime so I made my way up to the buffet. I managed to miss some of the night’s festivities including Chevelle performing as we set sail for the night, as well as Wilson’s Superbowl halftime show complete with cheerleaders and all! The game was available to watch on large screens all over the ship and tons of football game type finger foods to accompany it. I didn’t shoot any photos this particular evening as I was trying to live broadcast from the deck of the ship as Sevendust took the stage. I also wandered around interviewing many of the cruise goers about the cruise and who they were most looking forward to seeing. The theme for the evening was sports fan attire and since I am not really a fan of any team, I went with a sexy referee outfit; it was a hit…

Monday morning, we were back in Miami as if we had never left. The cruisers who didn’t come for the preparty were all boarding the ship and the top deck was filled with people enjoying the sun and the pool. Games and activities were available and as I wandered I inquired as to this HUGE long line I had seen go from one side to the other on the main deck. Turns out it was the line for band & Shiprocked merchandise. I was blown away at how many people were waiting to purchase!! Of course I spent a good part of the day gorging on food from the buffet or trying some of the paella they were making on the top deck.. The rest of the time I spent trying to get a few live broadcasts out while I still had cell phone service.

At 4:15, everyone gathered on the top deck to say Bon Voyage, and take a massive group photo (above, not taken by me!) and then right after that, Limp Bizkit took the stage.. Now I’ve always been a fan of Limp Bizkit’s music and I even did some work in the MMA Industry w/ Fred Durst in the past. But I never followed the band, or their members so I was a little surprised (emphasis on little) to see the outfit their guitarist, Wes Borland was wearing, or should I say lack of pants? If I had known it was going to be a no pants party, I might have dressed accordingly.. In doing some research on him, I realized that he was quite tame on the cruise compared to many of the other outfits and costumes that he is prone to wearing.. It was the bright blue contacts that had me mesmerized though. My attention wandered back to Limp Bizkit front man, Fred Durst himself.. His long beard was well kept, but starting to look gray. In spite of that, there was a youthful sparkle in his eyes as he jumped into the crowd and rapped right into the faces of his fans. It was an awesome show to see, on a beautiful day, in an awesome setting!

Im going to set the expectation of this blog early.. You saw a show. Then you went to eat at the buffet. Then you saw another show, and then you go to eat again. It’s the nature of cruising, and far be it for me or anyone else to break the tradition. So after Limp Bizkit left the stage, we stuffed our faces..

Since the theme of the evening was Superheroes, I made my way back to my cabin to change into my Super Girl outfit that I had brought for it. I wasn’t sure how many people were going to be in costume but that never has stopped me from being festive before.. I made my way up to the top deck where POD was to perform and I wasn’t disappointed to see TONS of the Shiprocked cruised dressed in costume. I went into photo mode and ran around taking pics of everyone in their outfits drinking and rocking out.

I wandered into the Stardust theater to check out Tremonti. The self named band was led by former Creed lead guitarist & founding member, Mark Tremonti and accompanied by Eric Friedman, Garrett Whitlock as well as Wolfgang Van Halen on bass. Everyone had kept buzzing about this show, so I knew I had to make my way into see them perform. It was mid performance by the time I arrived and I wiggled up to the front of the stage to get my photos and take in the rest of the show. The performed songs from the album, All I was with a couple teasers from the forthcoming album, Cauterize thrown in.

P.O.D. had already taken the stage up on the pool deck so I made my way up front and shot for a little bit. They had set up the press area of each stage to be the front right hand side so if you wonder why most of my photos are from that side, you know why.. P.O.D. are West Coast locals based out of San Diego so while I had never seen them perform live, I had met part of the band before and have a lot of friends who know them as well. As you can see from the photos, the upstairs pool deck was crowded with fans to see them kill this show on Monday night. The lighting was set really dark on the stage on their faces for some reason so it wasn’t long before I turned back to partying and shooting people’s costumes and just enjoyed the music as it floated into the air above the ship.

Now I was ready to hear some rock and roll so I once more made my way over to the Stardust theater. Keep in mind that there were four different stages around the ship so I just hopped from show to show that I felt like seeing. I missed SO MANY other great shows going on; there was no way to see everyone unless you left in the middle of a performance and were really fast at navigating your way around the decks of the ship. Buckcherry was my last show of the evening and it did not disappoint. Again since the press area was on the right side of the stage, the best photos I got were of Stevie D, the guitarist who was right in front of me. I didn’t lug both of my cameras around the ship with me although it would have been better to do so to get a wider variety of photos. Somehow the SuperGirl costume didn’t have a lot of pockets or storage space to speak of.

That being said, I enjoyed the sounds of Buckcherry as I clicked away and danced around all at the same time. I was fascinated by Josh’s full back tattoo of a King from a deck of cards and I spent quite a bit of time trying to get a good shot of it before retiring to the balcony to shoot from upstairs.

Now as far as the schedule seemed to show, that was the last of the performances which I thought was odd. Turns out the schedule seemed to have some issues whether it be the one from the ships phone app (Which was free to use unless you wanted intership texting and then it was $7 or $8 for the entire trip) or the ones on the monitors around the ship. Nonpoint had taken the stage at 11pm on the main deck. I caught part of the performance before an overwhelming desire to eat took over followed by a food coma that sent me hightailing to my cabin. It was a fun and productive day and I couldn’t wait to see what Tuesday had in store. 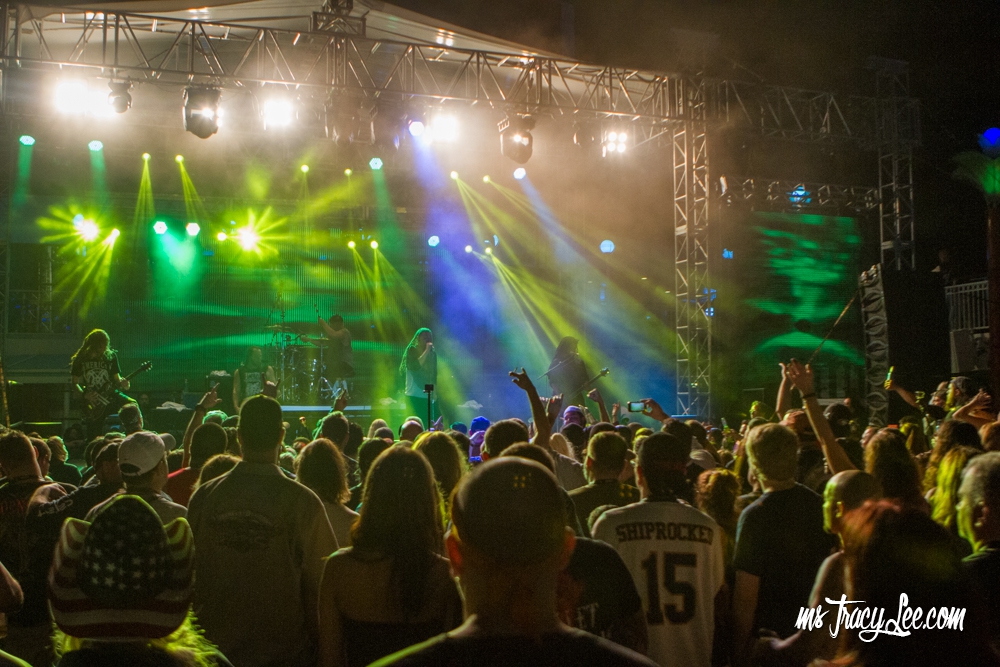