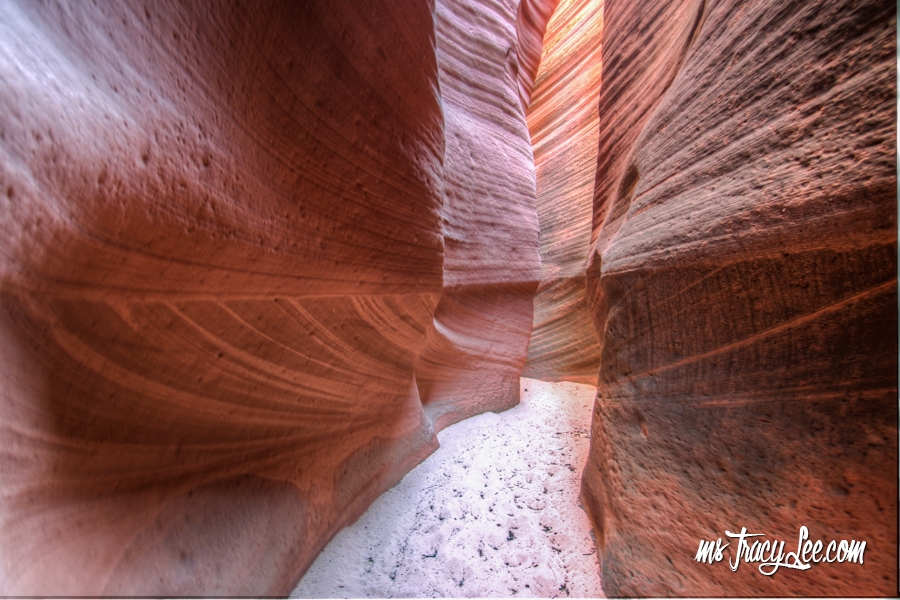 The Red Caves Diaries: lost for a few months, these photos are now seeing the light of day. It has to be the most exciting hike that I have done thus far because of the nature of the challenges it presented..

How did I find out about this extremely remote hike you ask?? Well I got addicted to slot canyons after visiting Antelope Canyon early in the summer. So I started googling, and I found that there are over 1,000 slot canyons in Southern Utah. And so began the addition.. More googling found me a number of places I wanted to see and when I came across Red Cave and saw that it was just east outside of Zion, I hit up my long time friend, Vagabond Bob and we made an adventure out of it!

6am.. I headed over to Bob’s house and we jumped into his SUV. At the time, we had no idea how great of an idea it was to bring the beast in spite of the cost of gas. We got on the road and stopped for a very unhealthy breakfast at McDonalds in Mesquite on the way up the mountain.. The journey took us through St George, Hurricane, into Zion National Park which is always a fantastic drive, and then out the other side, North on the 89 to Mount Carmel, UT..

I had done a ton of research on this hike, and part of the deal was we had to get permission to cross private land. So I found the phone number of the land owner on the internet and called her the day before to let her know we were coming. She told me where a key to the gate was hidden and advised me to take the key with and lock the gate behind us. I had downloaded all the directions for the hike off the internet as well as a topographical map because I knew we wouldn’t have phone service along the way. We made it to the property, through the gate and then followed the directions in the way we interpreted them which we found was the wrong way.. Like one wrong move and the car goes off a cliff, wrong way. Attempt #2 was a lot more successful and we finally (after making FULL use of the 4wheel drive) parked at the entrance of the “hike” as there was really no trail. 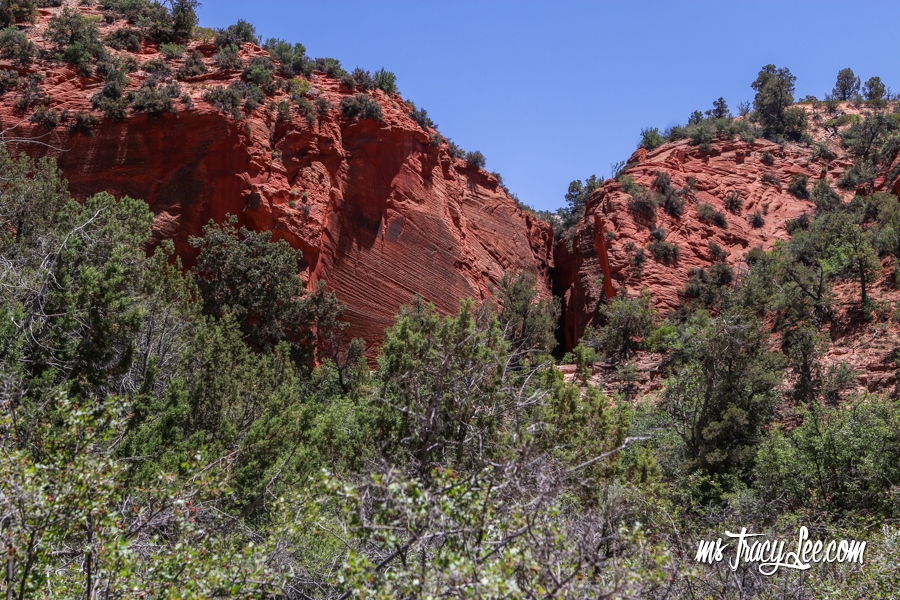 I got so excited at this point that instead of following the hike’s directions, I saw what I thought was the entrance to the slot canyon so I directed us that way. After about a 30 minute detour to a dead end, I reread the instructions that specifically said go towards lower Red Cave, and then do Upper Red Cave. I knew there was more than likely a method to this madness so we backtracked to the beginning and started over. Although there was no trail, we had a deep sandy wash to lead us for the next three plus miles. Walking in sand for over 3 miles, especially when you’re excited to get somewhere sucks. No, it really sucks.. Really. 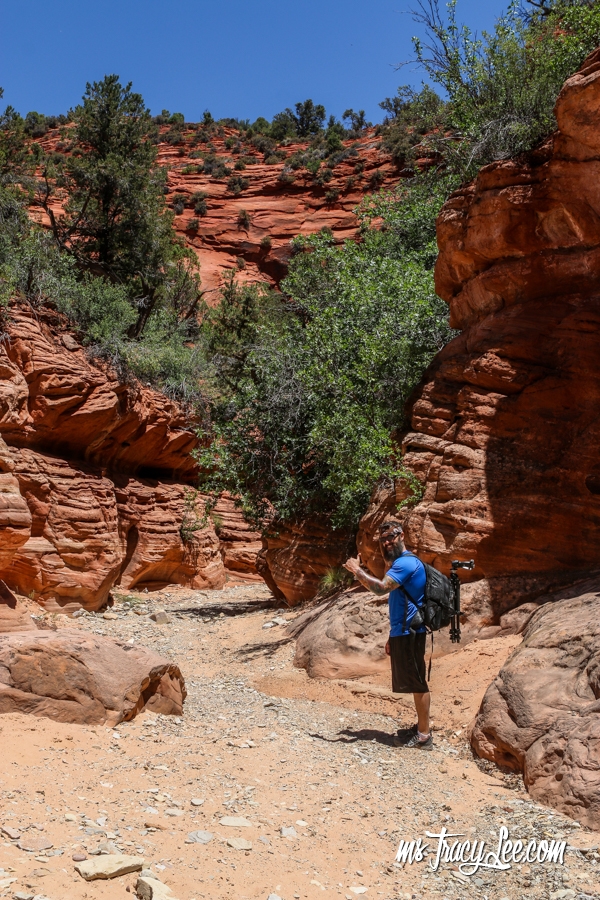 Following the directions I had downloaded was like playing a guessing game. The directions were pretty accurate we realized after we made it through the entire hike, but our interpretation of the land marks they spoke of was not. Needless to say, without getting lost, we eventually found our way to the mouth of Lower Red Cave. We stopped to have a picnic lunch of the sandwiches we had bought at a grocery store in the town of Hurricane hours earlier. I had frozen 8 bottles of water to bring with us, as well as another 6 just cold ones. We used all of that water on this hike; it was barely enough. 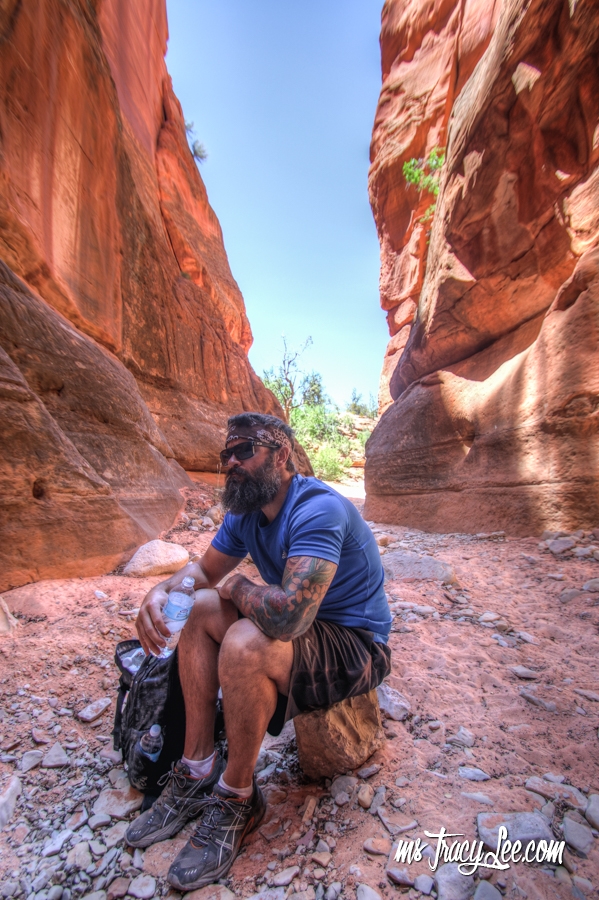 Lower red cave was as beautiful and wondrous as I had expected. The red sand stone walls of the slot canyon reached up many feet above our heads while the soft, red sand beneath our feet made our footsteps silent. Being that we were both photographers we spent quite a bit of time taking shots and exploring the first few feet of the slot. I knew this would come to an end quickly because there would be an area that we could not bypass without climbing equipment and ropes. The directions instructed us back to the beginning of the slot and up and over. We figured enough people had been through there we would see some semblance of a trail. We were wrong, and found ourselves struggling to climb the very steep, sandy hill to get up and around. I kept grabbing at trees and bushes to help pull myself up but they were loosely growing in the same red sand so it was a difficult feat. Either way- we both made it although at different points so we didn’t end up in the same place. I found the makings of a small path; Bob had found a different one and we just continued the direction of the slot. 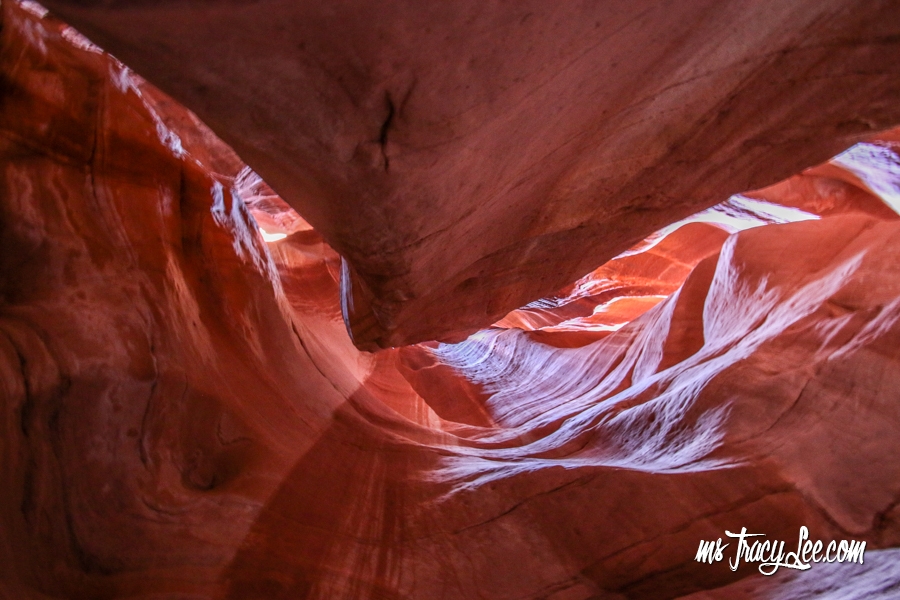 It wasn’t too long till I had found the area that the instructions had advised would be a good entrance back into the slot canyon. Only problem was, I was yelling and Bob wasn’t close enough to hear me. The way back in was much like a staircase of rocks with an eight or nine foot drop off at the end. I wasn’t concerned about that except for getting my backpack with my camera equipment down intact. Bob appeared along the slot but a good amount farther up so he had to backtrack to where I was and then assisted me in getting me and our stuff down the drop off.

I can’t give you an idea of the exact time that we spent in the next few hours exploring the mile long section of Lower Red Cave. It was like being at Antelope Canyon but without having to pay the fees, have a time limit, and deal with the amount of people. We didn’t see another soul on the entire hike! There was a couple different sections that went from completely closed slot to open ravine so that we weren’t quite sure at what point we were supposed to climb out of Lower Red Cave to head towards upper. We had noticed a cairn when we came out of the last enclosed section but I thought it was just signifying that we were on the correct path. A half mile later and I had a sinking suspicion that it was to signify our exit out of the area. Again trying to interpret landmarks, we decided that I was probably right and made our way back and then out.

This is where the hike got a little crazy. There was absolutely no trail anymore so we were walking somewhat blindly at this point; still trying to figure out landmarks that we were reading about as we wandered through the forest. I knew that the entrance to Upper Red Cave was due north of the exit out of Lower. It was afternoon, so we kept the sun to our left as we made our way in the direction we believed was north. We knew that we were to keep the mountain we were on to our right as well. It was 430 on my watch, but because of the time difference, it was already 530 where we were. For a split second I was concerned about our abilities to find our way out of this hike. On further inspection of the topographical map, I located two peaks in the distance that were marked by elevation on the map and realized that we just had to aim directly between those two peaks to hit our destination. Doing so dropped us EXACTLY where we wanted to be! By the way- for some reason I got cell service at this point and it was enough to post on my IG & FB about the hike we were on.

The beginning of Upper Red Cave had two good sized rappels that we had to bypass, so again we went over and around. I’m so glad that we had the directions to get us through all of this hike, because we wouldn’t have known that once around the rappels we had to backtrack through a ravine to get back to Upper Red Cave. Once back in the slot, it was much cooler and darker; partially due to time of day, partially due to a narrower and deeper, yet shorter section. This portion was just over half a mile. This slot had a lot more drop offs (usually about 7-10ft) that were fairly simple to navigate due to how narrow it was. We were able to use both walls to spider our way down the drops as Red cave led us deeper and deeper. This was actually a hugely fun part of the hike for me! I took quite a bit fewer pictures here because I had taken so many already as well as it being quite a bit darker. At one point I almost stepped on a harmless little snake; it startled me because I wasn’t expecting it. 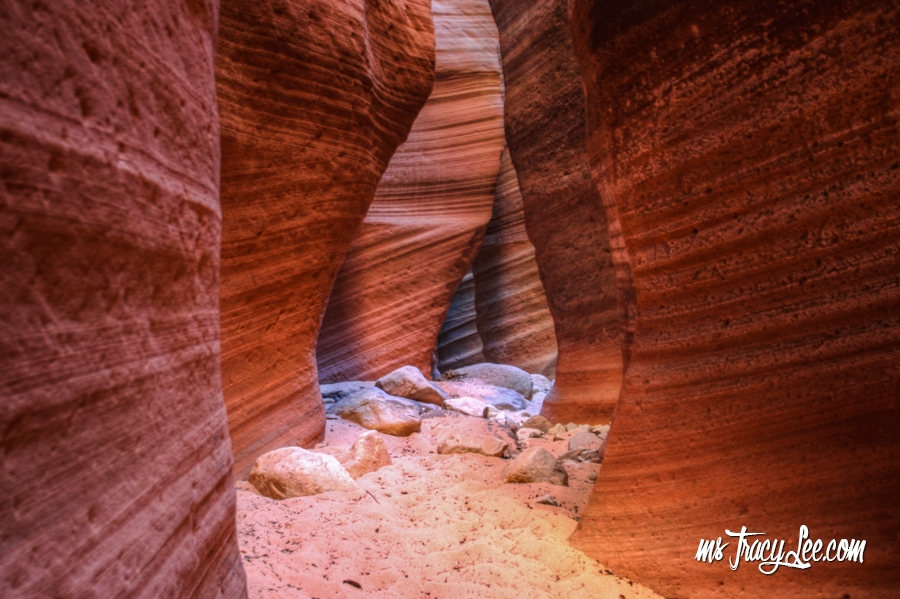 We exited out of the final section of Red Cave with it still being light out but the day was waning fast. It was another half mile at least to where we would climb up the hill to the car which we made in no time at all.. We were quite dusty; our shoes FILLED with red sand and our feet hurting from all the hiking on and through it. But the hike had been so exciting with so many great photos, we didn’t care one bit! We climbed into the car and very easily found our way out to the main road where we locked the gate and dropped the key off having never seen the owners of the land. The afternoon was long gone and the evening was just starting to set in.. We kept discussing different sections of the hike and our photos the entire way home..

Quick notes on the Red Cave Hike. We barely brought enough water with us. Also, this hike required a lot of problem solving, endurance and physical agility; there are a lot of people that I know who probably shouldn’t do this hike. The entire hike was completely dry and we didn’t see any water at all. But, Hiking slot canyons can be extremely dangerous due to flash flood so checking the weather report beforehand is IMPERATIVE! That being said, the juice was definitely worth the squeeze as you can see from the photos below. I am definitely in to check this hike out again some day!

Hope you enjoy the photos below!

Previous: So excited to head here…
Next: Lookie what I got! The…