Adventures in Abandoned Mines and Slot Canyons in Las Vegas

Adventures in Abandoned Mines and Slot Canyons in Las Vegas 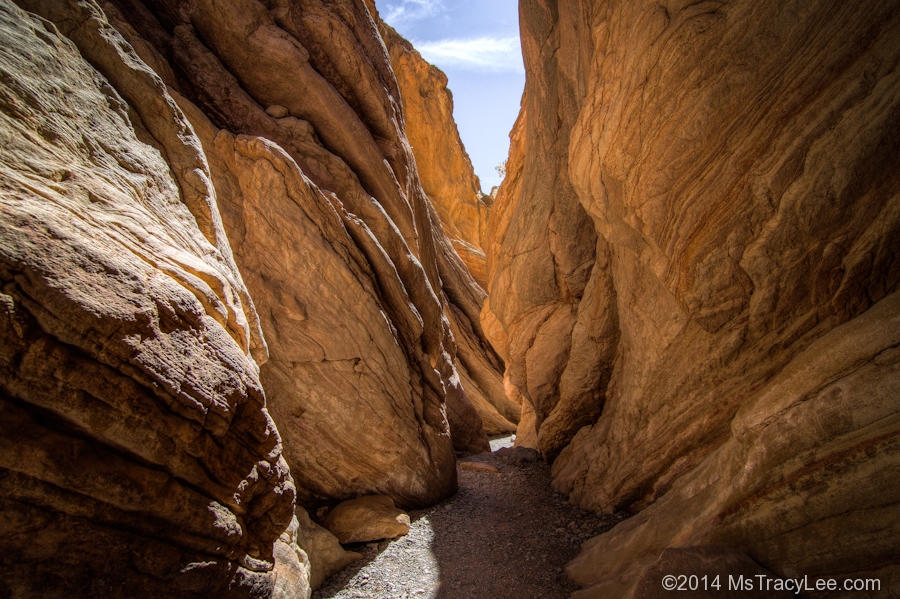 Wednesday morning I messed up. I had gotten me and Nathan up and on the road towards Baker at 7am.. We had a cave hiking mission we were on and the closest caves I had googled worth seeing were Lehman Caves in Baker.. It wasn’t till we were most of the way there that I figured out, they meant Baker, NV and we were headed to Baker, CA.. Damn.. We got off the freeway and turned around. Nathan had been driving 70 the whole way towards Baker, but for some reason heading back towards Vegas he stepped on it and we were driving 93. We got pulled over. Ticket ensued. Damn.

Well I had to recover the situation somehow and our adventure plans so I hit up my trusty friend, Google, and typed in “slot canyons near vegas” or something along the lines. After hiking antelope canyon, I have a slot canyon fetish that the over 1000 slot canyons in Utah should be able to fulfill.. Google came up with a couple options; the most appealing being Anniversary Narrows which was located in the Lake Mead recreation area. The pics looked cool and the way to get there took us RIGHT past Lake Las Vegas where we could go paddle boarding to cool off after the hike in the 102 degree weather.. I took that as a cool summer day for Vegas; Nathan seemed a little more apprehensive about the temperature..

We ran a few errands, picked up his dog, El Rey, grabbed some food and continued on our adventure. It was close to 12 by this time and we had already wasted 5 hours of the day. WE headed out towards Lake Mead and instead of taking off towards Boulder City, we took the exit towards the Calleville Marine and Lake Las Vegas. My national park season pass in 2 weeks has already proved itself worthwhile; I whipped it out to the booth attendant quickly and we were into the park with no issues.. Our first left on Northshore was simple and we settled in for the next 16 or so miles..

The directions I had found online were pretty easy to follow but I also no longer had service out there. We pulled off around mile marker 16 and took the dirt road for Calleville Wash North. Note- while there are small signs here- it’s not like a major road so you really have to be looking for it! We had read we needed 4×4 to get up the wash to the mine and the slot but realistically we could have driven the well tended mining roads all the way to the base of Anniversary Narrows in his Jetta; No 4×4 needed. We parked near the entrance to the mine and luckily for us some chap from the UK happened to be wandering out and gave us his flashlight. We wouldn’t have been able to wander the mine otherwise. 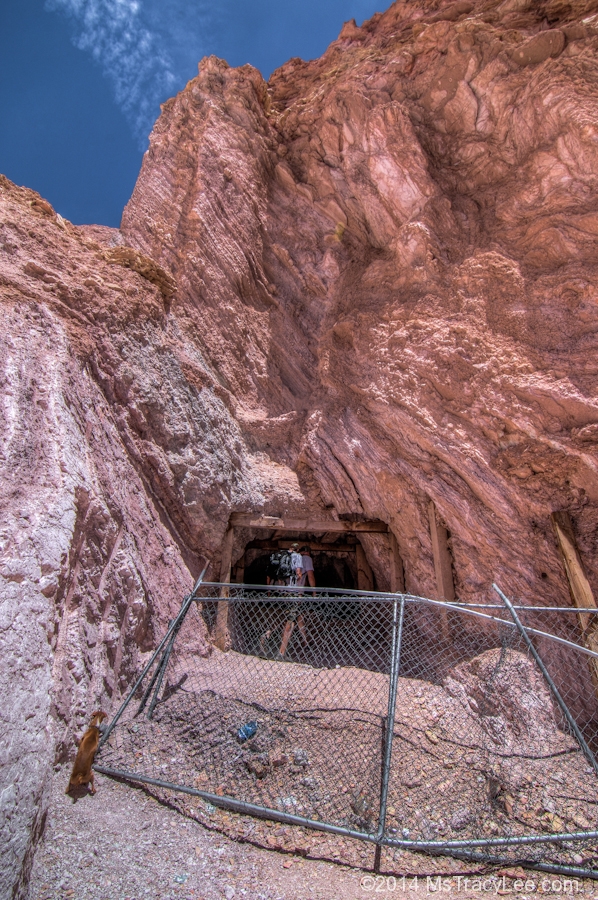 The mine was a bit confusing- signs said it was open to rock and gem collectors to mine from for personal but mot commercial. But there were broken down fences at the entrances. It didn’t stop us and we stepped into the cool darkness; We switched on the flashlight and entered the mine. We weren’t quite sure what to expect from the 1920’s so we walked cautiously and as the flashlight played across the ground and the tunnel ahead, sparkles caught my eye. There were tons of pieces of broken off crystal that had apparently come from the vein we saw running down the length of the tunnel. I learned by researching yesterday that the vein was Ulexite which is also sold as TV rock. 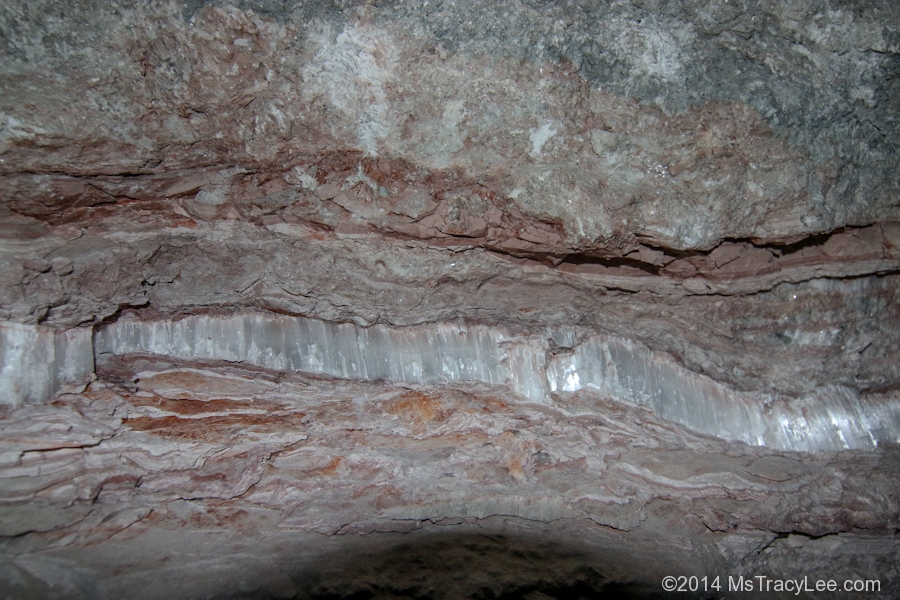 There were a number of blocked off shoots we came across as well as ladders extending up to different levels above. We went as far into the mine as we could have and although there were a number of forks, they all joined up 100 ft later to the same tunnel. Our stopping point was a big drop off to god knows where but although there was a bit of a path on the right side of it, we didn’t want to risk the path caving in under us. We made our way back out of the mine- not quite sure how far we had walked into it.

We wandered around the back side of the mountain where we found the wash that headed up towards the narrows. We found a second entrance to the mine which we also explored every aspect of that we could. We figured out that we were probably an entire level above the first part of the mine that we had explore; a level that the ladders we had seen must have led up to. A few times little El Rey didn’t keep up and we were forced to go back in the darkness where he had stopped presumably because he couldn’t see and was sitting there looking scared. 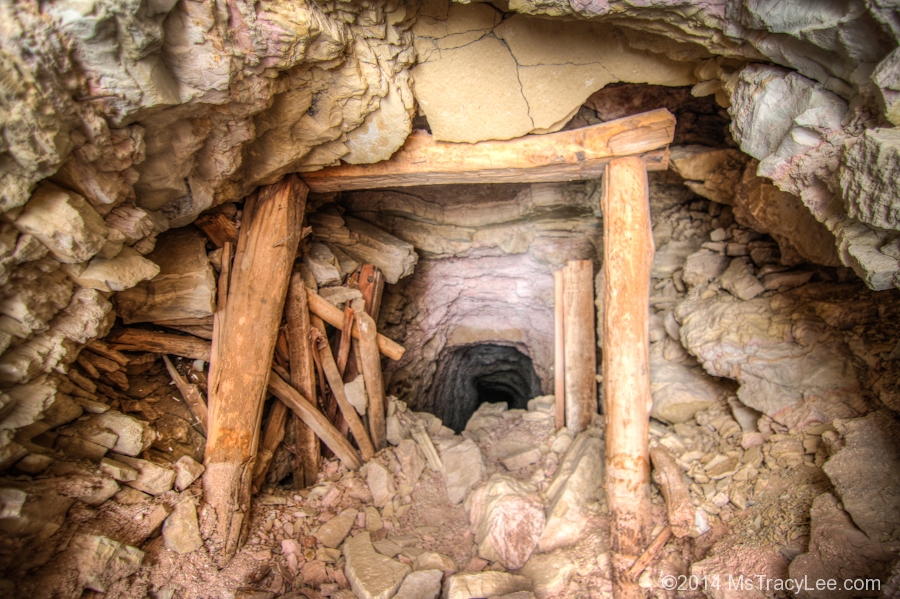 Back into the heat and light, we had made it to the base of the narrows. I had read that they were very short (less than half a mile in length) but somehow I think my sense of distance must be off when exploring something like this; climbing over rocks, and taking turn after turn in the beautiful slot canyon. What kept going through my head the whole time was, I can’t believe this is in Las Vegas!! I had forgotten to grab my tripod so was forced to shoot my HDR’s handheld but that wasn’t a big problem as the light was very bright at 2 in the afternoon.. 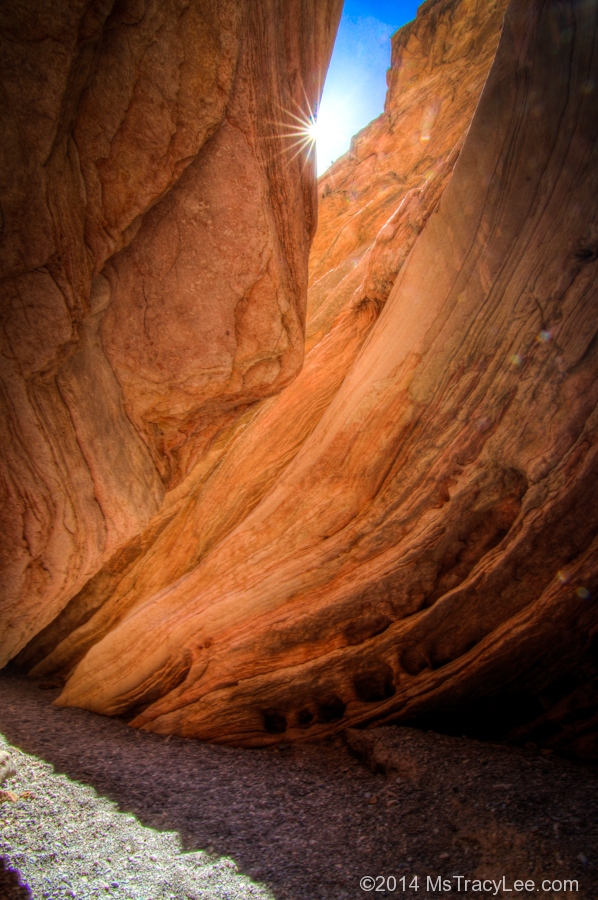 Next time I head back out, I plan to be more prepaared. Headlamps for each person exploring the mine would be good. I had good shoes on so that wasn’t a problem. TONS Of water is a necessity- especially if you hike all the way in from the road which is about a 5 mile roundtrip. We didn’t hike all the way in, we drove most of the way and still almost ran out of water. And we wouldn’t bring the dog next time. After all of the walking and then the heat, little El Rey definitely was a bit overheated by the end. Plus worrying about him in the dark mine wasn’t fun either. I would bring my external flash in to take pics inside the mine- the on camera flash was sadly lacking. NOTE: hiking slot canyons can be dangerous- if there’s any rain going on even miles away, beware of flash flooding!!!

Check out a bunch of the photos from our adventure. No external flash and my lens was giving me all sorts of trouble so I’m not the happiest I could be with the photos but I’m not unhappy either… The coolest thing about the adventure is that through all of it, we only came across 2 sets of people and that was at the very beginning and very end.

Previous: Happy birthday to my boy…
Next: So i’ve been going on…