Don't Miss
Home / instagram / This is my new friend,…

This is my new friend,…

Photo Caption: This is my new friend, Thomas. He is homeless and sleeps on the New York subway at night. He approached me while I was trying to live broadcast on @hangwith in Times Square. He was extremely nice and very kind, asked me some questions about myself and then explained that he wasn’t asking me for money, that he hadn’t eaten since 6 this morning and would I buy him some food. Without hesitation, I said, “I haven’t eaten all day either and I am in search of a Halal cart to get chicken and rice from. Let’s go have chicken and rice!” So he accompanied me for the next 8 blocks as I live broadcast through Time’s Square. We got stopped a number of times along the way by various people with their street hustles and every time Thomas was there watching my back. As we walked, I started asking him questions about himself, and about his job situation. He informed me that he used to be a cook and that tomorrow he has a second interview at a pizza place. “It doesn’t pay that great, but it’s a start!” I congratulated him for trying and making the effort with a job as we finally found the cart that he suggested as the best one. We both ordered chicken and rice, but he got his mixed with lamb. I also bought him a Gatorade and myself a water. I handed him $2 more for the subway that night and then I ran off to catch a train downtown. But not before wishing him Good luck on his final job interview tomorrow.
I spent over $10 today buying him food &more. Had he asked me for money my automated response would have been to turn him down. I think why is because I don’t mind feeding someone but I do mind supporting a drug or drinking habit. I was also inspired by his kindness and his motivation to try and lift himself out of his current situation.
As I have explained before, I do not share these stories looking for kudos or pats on the back; I didn’t change his life by what I did, but I hope I helped him take the edge off for a day. I share these stories in the hopes that I can inspire you, as I have been equally inspired by others. 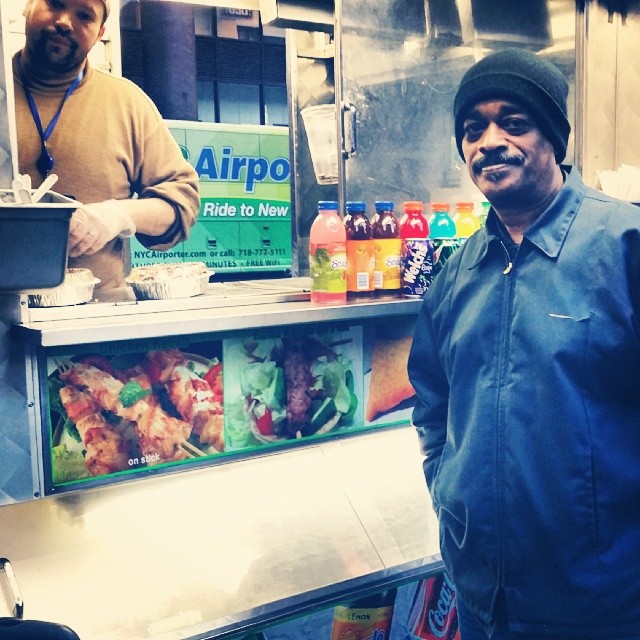 Previous: So cool to run into…
Next: I got invited to the…