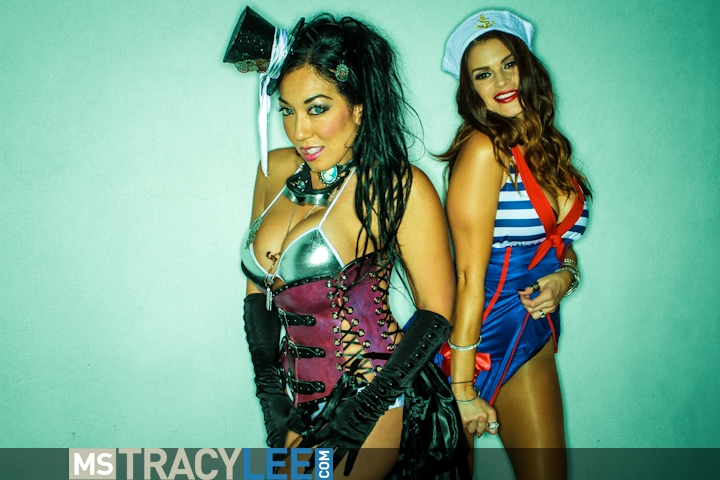 How I made my costume and Halloween Photoshoot with Cherie Carlson

How I made my costume and Halloween Photoshoot with Cherie Carlson: for this year’s Halloween costume, I went with a Steampunk Mad Hatter.. Now this started more as a sexy, go go mad hatter and then evolved into what you see here.. Oh and feel free to follow my girl Cherie Carlson

I took a Nerf Strong Arm that I paid about $10 for and disemboweled the entire thing, very carefully learning how to correctly put it back together after so that it would still shoot it’s foam darts should I want to fire on someone on Halloween night. I used Flat Black Krylon paint on the entire gun, then used gold and silver rub and buff to give it an antique look.. I grabbed all kinds of parts including the tube from Airborne effervescent tablets and a compass for the top of my weapon. Painted those and hot glued all kinds of fun parts all over it. I also used dabs of glue in certain spots prior to painting to give the semblance of rivets all over the gun. Looking back, I would use 2 part epoxy to secure the items as most of the pieces fell off in the chaos that was Halloween. 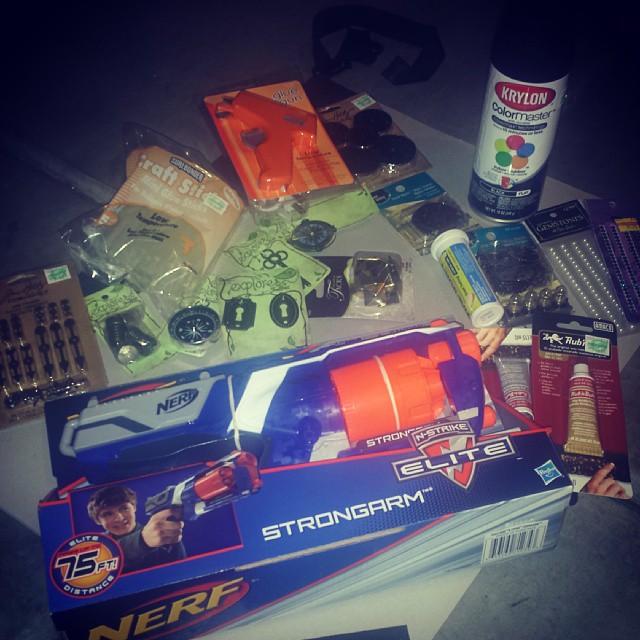 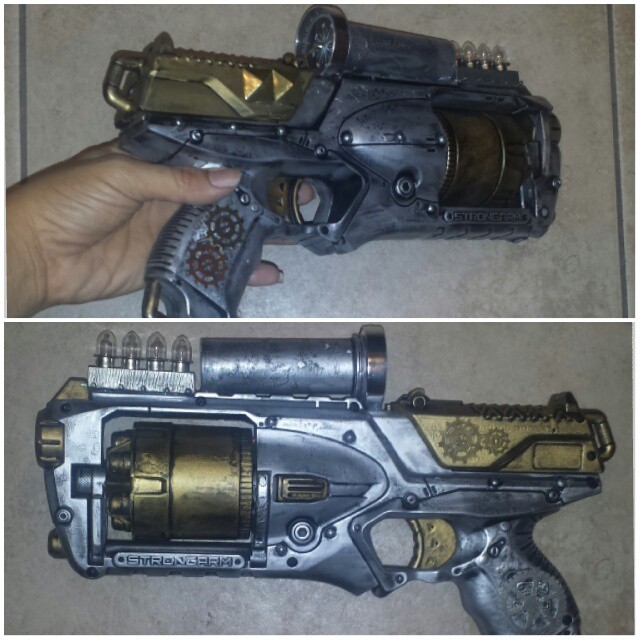 My gloves, boots, goggles and broach were all purchased online from a store that sells “steampunk” items called www.steampunkemporium.com. The gloves and boots were both lined with black buttons to give them a “victorian” feel. The googles and broach added to the steampunk flair. I attached the broach to a piece of black ribbon from my bustle project and tied it around my neck.

My corset I purchased in Hollywood about 8 years ago for Halloween for about $400.00.. Needless to say I had only worn it once and had no gotten my usage out of it so it was it’s time to shine again. The corset is made from hardened leather so it was like I was wearing body armor and couldn’t bend at the waist at all. Or breathe for that matter!

My hat and bra I bought at a stripper costume/clothing store on Hollywood Blvd near the corner of Hollywood & Wilcox. I don’t know the name of it but it’s half a block west of Wilcox on the South side of the street. They custom make items there too so if you’re looking for something special, it’s a good spot to go..

The Bustle I made from scratch. I was going to buy one, but more of the ones that I saw that I liked were overseas in the UK and I didn’t think they would make it here on time. I ended up spending under $20 to make mine whereas it would have cost close to $70 after shipping to purchase as similar item. One yard of the fabric of choice, and two rolls of inch and a half width satin ribbon went into making this. Oh and one spool of black thread.. 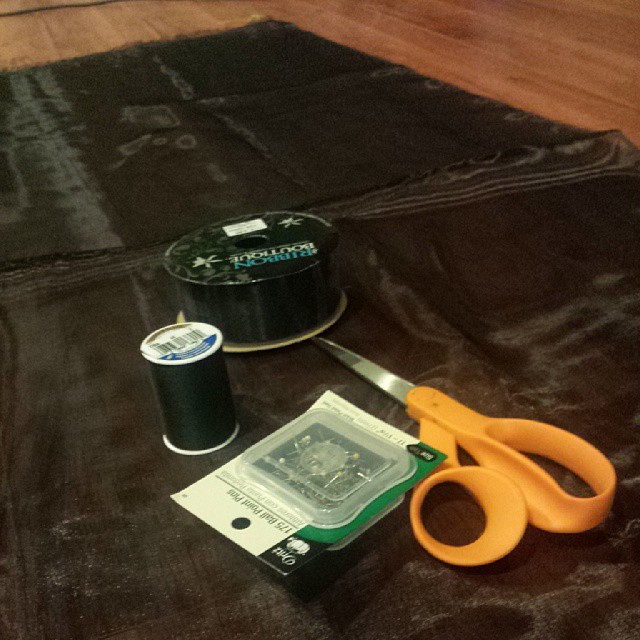 I had no pattern and no idea exactly how to do it. I have years of sewing experience though and just cut the fabric a yard wide at 3 different lengths. I sewed seams on one side, then attached ribbon to the same side, and then on the other side I sewed each length and bunched as I sewed.. Lucky for me they came out almost all exactly the same length after bunching. I then sewed all 3 layers together, and then sewed a long ribbon to it to tie around my waist. I think if I had done a seam on the top part before adding the ribbon, it would have been finished enough to become a saleable item should I want to make a living off designing and creating top quality bustles!! 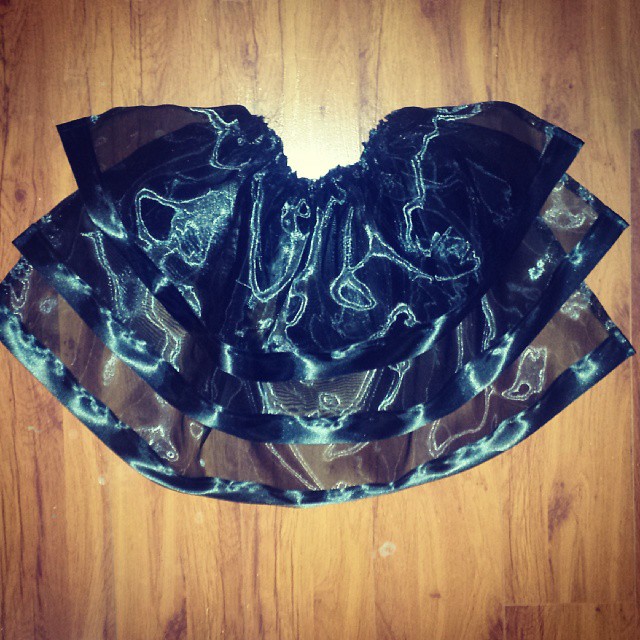 And the accessories.. Wow, incredibly enough, they were almost the most fun part. I had NO idea what I was going to do, but had gone to Michael’s and purchased all kinds of jewerly odds and ends to put together clips for my hair, as well as fixings for my bra and hat. The hat originally had a peacock feather attached to it, but I knew that had to go. I epoxyed two pieces of mixed cogs and gears together a few nights before halloween and then hand sewed those pieces; one to my bra and the other my hat. My necklace and earrings were quick afterthoughts from all the pieces I had purchased.. 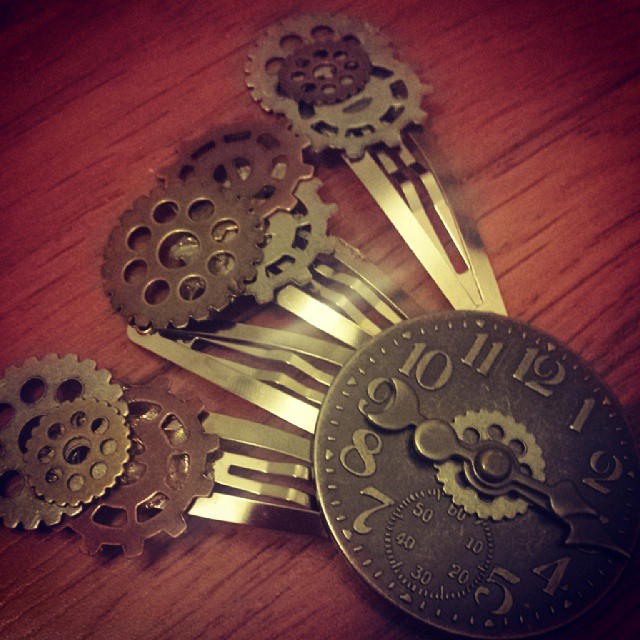 For my hair, I started about 2 days before Halloween. I let my hair dry within a bun when I want to go curly. I have naturally curly hair so it just takes to this method extremely well. Throughout the 1st day I took my hair down a number of times to let it get some air, dry a bit, and then retwisted up into a bun again. On the second day, the dreads had somewhat started to already form on their own, I just coaxed them by specifically separating and twisting pieces together, then rolled it up in a bun. By the 3rd day, Halloween, my mini “dreads” were ready to go in my waterfall type updo I created. I used a bunch of those barrettes that I had made to secure the do!

I did the makeup myself which wasn’t too difficult as I used to do my makeup all the time. My makeup nowadays usually consists of eyelashes and foundation and that’s about it. This time it was black eyeshadow from MAC in and above the crease, lined with an iridescent silver on the lid and above the black above the crease. Carefully blended together, eyelashes attached, then black liner applied. I iced the entire outfit with a hot pink lipstick I borrowed from Cherie that somehow got lost in the night..

For the photo, I grabbed my AB800 ring flash and threw it on my canon 7d. We went outside of my friend Josh’s house and used a blank white wall to shoot on..

So there you have it.. When I write it out, it seems like a ton of effort and planning, but it was such a blast to do!! I think I will not wait for Halloween for my next costume!!

Please leave your thoughts and questions in the comments below!!

Previous: Many people have been asking…
Next: Dim sum with my boo,…